Accessibility links
Andrew Wyeth: Realist Painter Had Eye For Magic The American realist painter died in his sleep early Friday at his home in Chadds Ford, Pa. He was one of the best-known artists of the 20th century — and a controversial one. Lynn Neary has a remembrance. 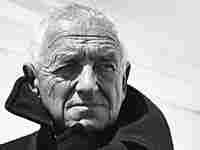 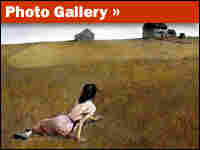 Gallery: Wyeth And His Work

Andrew Wyeth, one of this country's best known artists, died in his sleep in Chadd's Ford, Pa., early today; he was 91.

Wyeth was also born in Chadd's Ford, and except for the time he spent at his family's summer home in Maine, he lived his whole life there. His entire body of work is drawn from these two places: images of rural America and the people who lived there, realistic but often imbued with hidden meaning.

When Wyeth spoke about painting, there was an excitement in his voice that belied the sense of melancholy that seems to permeate some of his best known paintings. In a 1995 NPR interview, the artist — then in his late 70s — described his own process.

"It's an enlightening, it's a flash," he said. "And then after you have that flash, of course comes the hard work of finally pulling it together and putting it down with as great simplicity as you can."

Wyeth was a sickly child who was home-schooled; he had lots of time to play imaginary games and wander in the countryside. Wyeth biographer Richard Meryman says that childhood sense of wonder never left him.

"I think to understand Wyeth is to understand that in that body is a 10-year-old boy," Meryman says. "And at the same time the body is occupied by an intensely serious artist."

The son of the well known illustrator N.C. Wyeth, Andrew Wyeth began his artistic training under his father's tutelage. It was after his father's death in 1945 that Wyeth really came into his own as an artist.

The Philadelphia Museum of Art staged an exhibition of Wyeth work in 2006. Kathleen Foster, the museum's curator of American art, says he was more vulnerable, but also more serious, after his father's death.

"His work got deeper, his themes became more profound, and in many cases became much darker," Foster says.

In pictures like Trodden Weed, Geraniums, Groundhog Day and perhaps most famously in Christina's World, Wyeth painted the people, landscapes and buildings near his homes in Pennsylvania and Maine.

Well liked by the public, Wyeth's paintings were dismissed by some art critics as too sentimental — or as mere illustrations. In 1986, when his Helga paintings — more than 200 sketches and paintings of the same woman — were revealed, he was even accused of staging a media event. But Foster says his critics should look again. She says he wasn't just a realist; he was a magic-realist.

"His pictures are just shot through with memory and fantasy with every storybook he has read," Foster says. "And it comes out in the magic of the image, because his pictures are fascinating. You want to come back and look at them again."

Wyeth's life was organized around and energized by his need to paint. Meryman, his biographer, says painting was probably the one thing Wyeth could not live without.

"I always thought that the day he could no longer paint, he would die," Meryman says. "And in a sense this is what happened. I wouldn't doubt at all that he was ready to go."