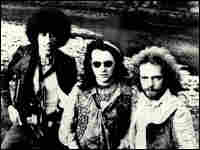 What makes Thin Lizzy's live (or "live") music more revealing and/or consequential than its studio efforts? What other bands fall into the same category?

Boys Are Back in Town 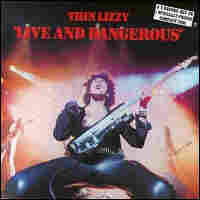 It's not exactly "live," and to modern ears, its tightly scripted songs likely won't seem terribly "dangerous." Yet Live and Dangerous, a 1978 double album, is the best existing document of the under-appreciated Irish hard-rock band Thin Lizzy.

Led by bassist, singer and songwriter Phil Lynott, Thin Lizzy existed on the cusp of greatness for a few years, just before punk rendered its type of bluster passe. The band's worldwide breakthrough came in 1976, with Jailbreak — and its single, "The Boys Are Back in Town" (audio) — which was pure power-chord overdrive, functioning as the perfect accompaniment for a Friday night motoring in the fast lane. Along with success came pressure to record a quick follow-up, and within the next 18 months, Thin Lizzy churned out Johnny the Fox (1976) and Bad Reputation (1977) while touring constantly.

Those two albums were less creative than Jailbreak, but the label pressure didn't stop, and when producer Tony Visconti couldn't fit another Thin Lizzy studio album into his schedule, the band decided to put together a live record instead. As Visconti explains in an essay on his Web site, Lynott wanted to re-cut some vocals, at which point the band realized that the backing vocals were off; pretty soon, they'd replaced much of the music, including guitarist Scott Gorham's solos. By the time they'd finished, the only remnant from the original live tapes were Brian Downey's drums.

Even with all that futzing, Live and Dangerous retains Thin Lizzy's busting-loose rebel energy: There's more fire in these versions than on any of the group's studio albums. At the same time, the bittersweet nuances that Lynott wrote into these songs are easier to hear. Unlike many of his hard-rocking peers, Lynott thought about his lyrics: He was a romantic poet in rocker garb, whose stories of restless teenagers scheming for escape, as on "Southbound" (audio), depend upon zinging, deftly choreographed twin-guitar leads. Lynott, who died in 1986, had a grand, widescreen vision for his music, and though it often got lost in the recording studio — particularly on later, more conceptual projects — it comes through loud and clear on this curious, and surprisingly enduring, live document.