Accessibility links
Pyramid Schemes Proliferate In China Hundreds of thousands of Chinese are hoaxed by pyramid schemes every year, and lawmakers are considering proposals to crack down on the fraudulent, get-rich-quick "business ventures." But some say not enough is being done to tackle this growing problem. 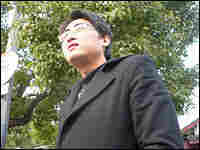 Ye Piaoling, 30, once was a pyramid scheme boss and claims to have helped control 40,000 people. Now, he helps people escape pyramid schemes. He is worried about disclosing the way he looks, for fear of retaliation. hide caption 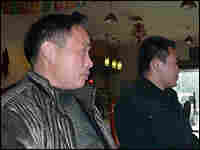 Former pig farmer Li lost $6,000 to a pyramid scheme. He appears here with his son, who helped him to escape. Louisa Lim/NPR hide caption

Hundreds of thousands of Chinese are hoaxed by pyramid schemes every year, and lawmakers are considering proposals to crack down on the fraudulent, get-rich-quick "business ventures." But some say not enough is being done to tackle this growing problem.

In a nondescript hotel room in the central Chinese city of Changsha, dreams are being shattered. A young man is talking; an elderly man is sitting absolutely still listening, a twitching muscle in his cheek the only sign of his turmoil.

Slowly, painfully, the realization is dawning on him that he has invested his life's savings — some $30,000 — in a pyramid scheme.

"Some people even sold their houses and got bank loans to invest more," says the elderly man, Cai, desperately trying to marshal evidence on his side. He asked that his full name not be disclosed, as he didn't want friends to know the extent of his losses, and he feared retaliation from pyramid scheme members.

But an anti-pyramid scheme activist, who calls himself Ye Piaoling, describes exactly how Cai was conned, detailing the structure of the organization that cheated him, even down to the design of its membership cards.

"I know," Ye Piaoling says, "because I designed those membership cards myself."

In a dramatic flourish, Ye Piaoling comes clean. "I myself was once a pyramid scheme boss," he admits.

"Although I'm very young, I entered this business in 2004. Nine of us controlled 40,000 people. In the past, I've cheated a lot of people. You are effectively my victim," he says.

Ye Piaoling once used his rhetoric to get people to join his pyramid scheme. Now, he reserves those same powers of persuasion to help people leave such groups. He was called to Changsha by Cai's son, a 26-year-old university graduate who asked that his name not be used. His suspicions were raised after his father tried to get him to invest money. He says his father was vulnerable because of the economic climate.

"Because of the economic crisis, our family factory is facing bankruptcy, so my father was depressed. He wanted to find new opportunities and a new life," he says.

Chinese pyramid schemes, which offer impossibly high profits and operate by using money from later investors to pay earlier recruits, are a heady mix of economic scam and quasi-religious cult, where the object of worship is money itself. Footage of life inside a pyramid scheme shot by an undercover Chinese journalist shows classes with an intense, almost religious fervor.

This documentation is backed up by interviews with several pyramid scheme victims, who say these sessions, held every morning and night, were attempts to brainwash them. Pyramid schemes are illegal in China, but it is legal to sell directly to customers, as Amway does. And pyramid schemes often blur the differences to persuade people to join. In the case of 47-year-old Li, this strategy was successful.

"They persuaded me by saying our former leader Deng Xiaoping had brought direct sales to China from the West," Li says. "They said it was in a gray area and not yet legal. Once legalized, it wouldn't be so profitable, but right now you could make profits of 60 percent."

In his case, the supposed product was a health tonic, but he never saw it. That didn't stop him from handing over $6,000 of hard-earned cash that he made as a pig farmer to buy 15 "shares" of the product.

"It was voluntary. They brainwashed you, and as you got involved, you handed over your money. They said if you spent that much, you could make $20 million in profits," Li says.

Nationally, the figures on pyramid schemes in China are extraordinary: In 2008, a fertilizer scam conned 380,000 people. In 2007, a cosmetics fraud involved half a million people. Gullible Chinese investors have been tricked by pyramid schemes as disparate as projects selling ant farms, investing in cemeteries and even promoting AIDS awareness.

Numbers are hard to come by. The government department responsible, the Anti-Pyramid Scheme Office, didn't reply to requests for information. But the official Xinhua News Agency says the government cracked down on 3,747 pyramid schemes in the first 11 months of 2008. In 2006, 16,000 people were arrested.

But some charge not enough is being done to stop pyramid schemes on the ground, often leaving family members to rescue victims. Li's son — another university student — describes the reaction when he went to the police.

"They said this had been happening in the area for several years. They needed proof, but I didn't have any. They wanted me to be their undercover agent and pay money to the pyramid scheme and then report it. How could I be their spy?" he says.

Some family members of victims believe local officials turn a blind eye to pyramid schemes because they stimulate the economy, by luring thousands of victims to live in remote rural areas. There, they live in closed communities, attending brainwashing sessions and sleeping in sex-segregated dorms. For entertainment, they sing songs and put on short performances.

This sense of community — and the spiritual satisfaction derived from it — is one psychological tool used by pyramid schemes. Just days after leaving his group, the elder Li is already nostalgic.

"There was real affinity between people. It was like a great big family. Our society today is just people shoving each other, people exploiting each other. Only inside the group, we helped each other," he says.

Pyramid schemes prey on the aspirational and the vulnerable. These aren't hard to find in get-rich-quick China, where the big wealth gap stokes both resentment and determination. Pyramid scheme victims cut across society, with anecdotal evidence indicating university students are particularly susceptible, especially given the scarcity of jobs. Activist Ye Piaoling warns the trend is likely to get worse.

"The financial crisis offers a historic chance for the proliferation of pyramid schemes. According to our statistics, there are probably between 5 and 10 million pyramid scheme victims in China. But if China goes on like this, the number of victims could increase to 50 million in less than three years," he says.

Since July, the number of requests for help has spiked. Ye Piaoling says he now gets about 50 phone calls a day pleading for help and hundreds of messages on his Web site. In the past three years, this 30-year-old has extricated about 300 people from pyramid schemes. He says he is motivated by guilt over his years as a pyramid scheme boss.

"I'm doing this to try to salve my conscience," says Ye Piaoling. "I've cheated lots of people, now I want to save lots of people. Huge numbers of people hate me. That's why I haven't gone home for six years. Even my parents hate me for tricking all my friends and relatives," he says.

Back in the hotel room, Ye Piaoling tells Cai one final reason for his conversion. Maybe when the police finally catch me, he says, they'll be kinder to me. He has been talking for over an hour to Cai, who has finally agreed not to return to the pyramid scheme.

The day's work is over for the activist. But, with the economic crisis worsening, he fears what tomorrow might bring.