Accessibility links
Inaugural Events Kick Off Amid Crescendo Of Hope President-elect Barack Obama and his family are back in Washington on Sunday, where inaugural week activities and parties are in full swing.

Listen
Inaugural Events Kick Off Amid Crescendo Of Hope 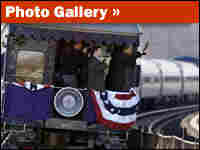 President-elect Barack Obama and his family are back in Washington on Sunday after a train journey Saturday from Philadelphia, and inaugural week activities and parties are in full swing as the hours tick down to his swearing-in ceremony Tuesday.

Sunday's big event is the official inaugural opening ceremony at the Lincoln Memorial, with performances and readings by Beyonce, U2, Bruce Springsteen, Sheryl Crow and other artists. Hundreds of thousands of people are expected to descend on the National Mall for the event — a possible harbinger for the even bigger crowds expected when Obama becomes the 44th president of the United States on Tuesday.

Sunday's ceremony will be broadcast live on many public radio stations and will be streamed live at NPR.org.

Obama and his family arrived Saturday in Washington after boarding a train in Philadelphia and headed south on a 137-mile journey. The nine-car passenger train made stops for rallies in Wilmington, Del., and Baltimore.

The journey took some seven hours, but speed wasn't the point. This was one final chance for Obama to thank those who helped elect him to the presidency, and a chance to ask Americans for their help and their patience, and to look ahead to the task that awaits him.

There was no shortage of symbolism along the way, including the first stop in Philadelphia. At the place where America's founding fathers gathered and where historic Independence Hall stands not far from the train station, Obama spoke before boarding the train.

Security was tight as the train rolled south. With the bright winter sun still low in the eastern sky, and temperatures outside just in the teens, people braved the cold as they gathered on bridges to watch the train pass beneath them. They'd stand behind yellow police tape stretched across intersections in groups of 5 or 20, or sometimes as many as 100 or more. The train rolled past backyards, where an occasional resident would stand on a back porch alone and wave as it went by.

The train's first official stop was Wilmington, Del., where Vice President-elect Joe Biden and his wife, Jill, joined up. All four headed off to rally just outside the station where a crowd of nearly 8,000 waited.

Biden, who represented Delaware in the U.S. Senate for 36 years, was the sentimental favorite.

Biden's remarks were mostly personal, but he, too, talked of the challenges the new Obama administration will face.

"Our economy is struggling. We're a nation at war. Sometimes it's hard to believe that we'll see the spring again. But I tell you, spring is on the way with this new administration."

The day's speeches all dealt with the serious problems to be confronted, but there was also a festive atmosphere at all the events. The train's manifest included a group of about 50 people whom Obama met over the course of the campaign. Many had overcome hardship; some were community leaders. At one point, they serenaded Michelle Obama, who celebrated her 45th birthday Saturday.

That was just before the train made its final stop of the day: a big, campaign-style rally with 40,000 shivering people at the War Memorial in downtown Baltimore. Here, the president-elect again asked people of all backgrounds and all beliefs to work together for a larger cause.