Accessibility links
D.C. Security Braces For Inauguration Crush Millions are expected in Washington, D.C., on Tuesday to watch President-elect Barack Obama's swearing-in and parade, and to attend the evening's many inaugural balls. Law enforcement officials have devised an unprecedented and elaborate security plan aimed at protecting the president and the public. 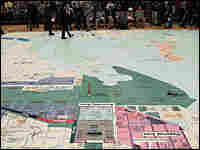 Military personnel stand on a 40 foot-by-40 foot planning map on Dec. 18, 2008, spread on the floor of the D.C. Armory. It is being used to help plan inaugural logistics. Mark Wilson/Getty Images hide caption 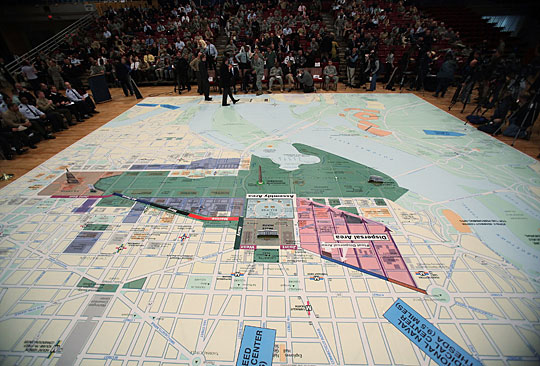 Military personnel stand on a 40 foot-by-40 foot planning map on Dec. 18, 2008, spread on the floor of the D.C. Armory. It is being used to help plan inaugural logistics. 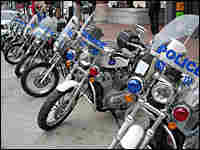 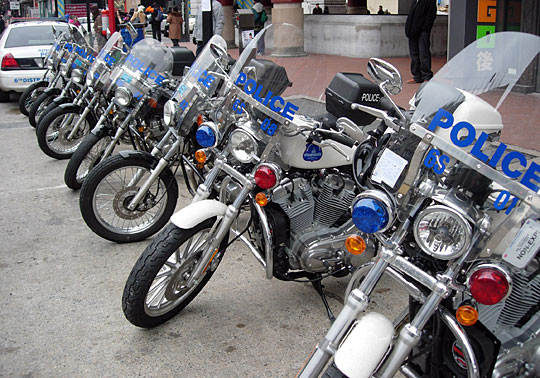 Millions are expected in Washington, D.C., on Tuesday to watch President-elect Barack Obama's swearing-in and parade, and to attend that evening's many inaugural balls. Law enforcement officials have devised an unprecedented and elaborate security plan aimed at protecting the president and the public.

While Obama has been thinking about what to say on Tuesday, and happy Democrats are figuring out what to wear that night, the Secret Service has been planning, too. Actually, its preparations began long ago, as the Service began working with 57 other agencies to make sure the new president and those who hope to catch a glimpse of him are safe.

"The Secret Service certainly recognizes the historical significance of this inauguration," says Special Agent Ed Donovan, a spokesman for the Secret Service. "It's been widely reported that the crowds will be larger than average. That's certainly something that we're considering, and the plan that we come up with is going to have to be elastic."

It's estimated that as many as 2 million people might crowd the parade route and fill out the National Mall to watch the events surrounding the inauguration of the nation's first African-American president.

Cathy Lanier, the chief of Washington's police department, remembers election night. Thousands of revelers spontaneously poured into the city's neighborhoods to celebrate Obama's victory, and it became clear then that this would not be an ordinary inauguration.

"My officers were out standing around these large crowds in Adams Morgan," Lanier recalls. "People were just coming over and hugging the officers in just an unbelievable spontaneous reaction.

"I looked at my assistant chief about 20 minutes into this — this went on until 4 a.m. on a work night — and we just looked at each other and thought, you know, that whole plan that's almost complete is going to have to start all over again, because it's a very different event."

The biggest crowds will be on the Mall, where Jumbotrons will show the swearing-in ceremonies. The screens will also be used to pass along messages in case an evacuation is needed, and to announce when the inaugural parade route is filled to capacity.

About 2 square miles of downtown along the Pennsylvania Avenue parade route will be fenced off, accessible only to people who have gone through metal detectors and bag checks.

At the Joint Operations Center, law enforcement officials will monitor feeds from hundreds of security cameras. They'll be looking for anything out of the ordinary, Lanier says.

"This is our city," she says. "We patrol it every day, and we know sometimes things that are very subtle that are out of place."

Seemingly nothing has been left to chance. The Coast Guard will patrol the Potomac River; military and police will patrol the skies. There will be a lot of police on foot. More than 4,000 officers from 99 different departments will augment 4,000 D.C. cops. Lanier says that while most police will be visible, many will not.

After the terrorist attacks in Mumbai, India, in which a major hotel was targeted, police began briefing Washington hotel and restaurant managers to keep an eye out for suspicious behavior. But authorities say their biggest worries simply are the number of people who may show up in Washington and getting them out if something should happen.

While law enforcement hopes it has planned for almost every contingency, officials say they want the day to be memorable for the right reasons.