Accessibility links
Rick Warren: The Purpose-Driven Pastor Evangelical pastor Rick Warren has long been portrayed as a "new" kind of evangelical — one who is as concerned about issues like poverty and AIDS as abortion and homosexuality. With a level of influence unparalleled since Billy Graham, he was a controversial choice to deliver the invocation at the presidential inauguration. 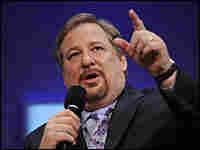 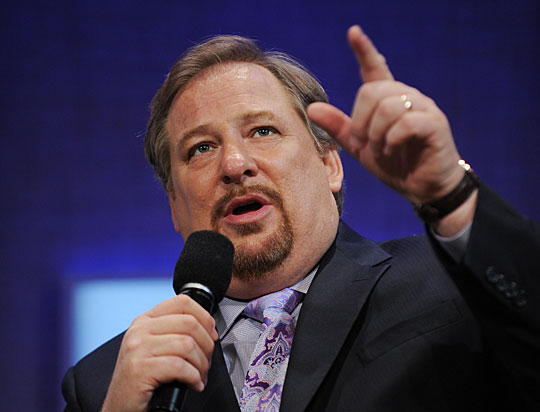 In 1980, fresh out of seminary, Rick Warren and his wife, Kay, moved to Mission Viejo, Calif., to start a church. Warren had no money, no building, no congregation. But he did have a plan: to build a church for people who never went to church.

"He knocked on doors of hundreds of people," says his brother-in-law, Tom Holladay. "And he asked them a lot of questions about what advice they'd give to a new pastor in the area. And he also asked them, 'Why don't you go to church?'"

They told him church was too formal, it was irrelevant or was always begging for money. Based on that survey, Warren shaped Saddleback Church to meet their needs.

David Domke, author of The God Strategy and a professor at the University of Washington, says Warren targeted the young, upwardly mobile, busy baby boomer.

"He sold it like people sold vacuum cleaners in the 1940s," Domke says. "You go out, and you build a clientele, and you build a relationship, and then you invite these people to check out the product."

Warren shied away from fire and brimstone, though that's part of his Southern Baptist theology. He focused on people's "felt needs."

Thus was born the "seeker-sensitive church."

It worked. Today, 22,000 people attend Saddleback each week. By the 1990s, Warren had become an icon within the Christian subculture. Then, in 2002, he published A Purpose Driven Life, a sort of manual for living out God's will. The book was a best-seller among churchgoers, but few others had heard of it. Three years later, Warren and his book landed in the media spotlight.

That cultural moment was prompted by Ashley Smith, an Atlanta woman who was taken hostage by Brian Nichols, who had killed several people, including the judge overseeing his rape trial. During the ordeal, Smith read to her captor from A Purpose Driven Life, and they discussed spiritual issues. In the morning, Nichols surrendered to police peacefully. Oprah Winfrey featured the story on her program, and as Smith cried "No way!" Oprah welcomed Rick Warren onto the set.

Warren became a household name, and his book became the biggest blockbuster in American publishing history. Even though he began to "reverse tithe" — that is, to give away 90 percent of his income — he was still earning millions in royalties. More than that, he had cultural influence approaching that of the Rev. Billy Graham. But this success prompted him to do some soul searching. Warren realized that the American evangelicalism he had pioneered catered to the needs of the rich while ignoring the poor.

Warren began spending much of his time in Africa, making AIDS, poverty and illiteracy his top priorities, and trying to shift evangelicals in a new direction — as he put it, "from self-centeredness to unselfishness."

Domke calls Warren "evangelical 2.0." He has kept his core conservative principles, but updated them with elements like social justice and the environment. This shift drew the attention of Barack Obama, then a newly elected senator from Illinois.

In 2006, Obama asked Warren to read a galley proof of the senator's book, The Audacity of Hope, and the two struck up a friendship.

Warren, who had largely avoided politics, became a key figure in the 2008 presidential campaign when he invited Sens. Obama and John McCain to a televised forum on faith and world view.

Warren's question — "At what point does a baby have human rights?" — prompted Obama's nadir moment, in which he said those decisions are "above my pay grade." As Obama stumbled through one the worst performances of his campaign, Warren peppered him with other litmus test questions: Have you ever voted to limit abortion? Would you support a constitutional marriage amendment? Do you favor stem cell research?

"I hear from good sources it sort of surprised the Obama campaign," says Michael Cromartie, who directs evangelical studies at the Ethics and Public Policy Center. "They did not seem to recognize that Rick Warren was a man who had broadened the evangelical agenda, but he hadn't let go of the former agenda that many evangelicals care about."

Warren hasn't budged an inch on abortion or homosexuality. He quietly supported California's Proposition 8, which barred gay marriage. Later, he drove the point home in an interview with Steve Waldman of the Wall Street Journal and Beliefnet.com.

"Do you think that's equivalent to gays having marriage?" Waldman interjected.

President-elect Obama's invitation to Warren to deliver the invocation at his inaugural set off an outcry from gay rights activists. Obama defended Warren, saying both men believe in conversation with those who disagree with them. Likewise, many conservatives have criticized Warren for his association with the liberal Democrat.

Over the next four years, that commitment to civility shared by the new president and the purpose-driven pastor will likely be tested again and again.