Accessibility links
Obama Seeks To Bridge Partisan Divide When he was running for president, Barack Obama presented himself as a postpartisan figure. He promised to bridge barriers of ideology and party. Whether he can hammer out the grand bargains needed to pass his big reforms will be a key test. 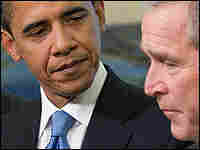 Even though Democrats will control the White House and both houses of Congress, President-elect Barack Obama is trying to emphasize bipartisanship. He met with President Bush on Jan. 7. Saul Loeb/AFP/Getty Images hide caption 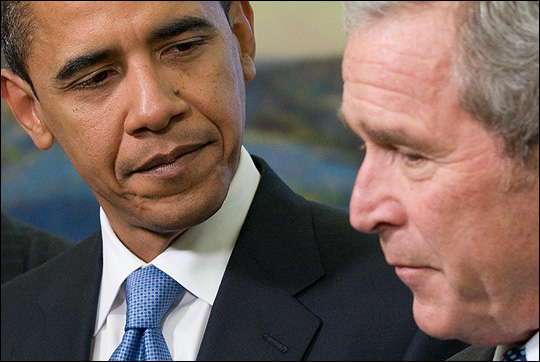 Even though Democrats will control the White House and both houses of Congress, President-elect Barack Obama is trying to emphasize bipartisanship. He met with President Bush on Jan. 7.

When he was running for president, Barack Obama presented himself as a postpartisan figure. He promised to bridge barriers — not just barriers of race and culture, but also ideology and party. It wasn't exactly clear then what Obama's postpartisanship would mean in practice, but a picture is now emerging.

Since the election, Obama's rhetoric hasn't changed. He's still trying to position himself above or outside the traditional partisan divide — especially when he talks about the economic crisis.

"This is not a Republican problem or a Democratic problem at this stage. This is an American problem," he has said.

That sounds a lot like other presidents, says the American Enterprise Institute's Norman Ornstein, who has spent his career analyzing the corrosive effects of partisanship in Washington.

"Let's face it: We've had presidential candidates and presidents frequently talk about how they were going to bring in a new era, to bring us together," Ornstein said.

There was Richard Nixon, whose slogan was "bring us together." Gerald Ford promised an era of "compromise, conciliation and cooperation." George H.W. Bush was "kinder and gentler," and George W. Bush wanted to "change the tone." But nothing really changed in Washington until — maybe — now, says Ornstein, who is getting ready to set aside his cynicism on this subject.

"At least in this interregnum period before Barack Obama takes office, is it seems to be more than just rhetoric," Orstein says. "We are actually seeing — for the first time in a long time — some actions that may or may not lead to a different kind of partisan dynamic in Washington."

First, there were the symbolic gestures of inclusion — like inviting evangelical pastor Rick Warren to give the invocation at the inaugural ceremony Tuesday and gay Episcopal Bishop Gene Robinson to deliver the invocation at the inaugural concert Sunday. Then there's the Cabinet — not exactly a national unity government, but it does have plenty of centrist Democrats. It also has high-profile veterans of the outgoing Republican administration — Defense Secretary Robert Gates and National Security Adviser designee Gen. Jim Jones.

Recently, Obama was adamant that when it came to his economic stimulus package, he had no pride of authorship, no preference for a Democratic or a Republican idea — just a good idea.

"If it works better than something I have proposed, I'll welcome it," Obama has said. "What is not an option is for us to sit and engage in posturing or the standard partisan fights when the American people are out there struggling."

Obama has received high marks from the GOP leadership for giving them a chance to consult, if not collaborate. And to get Republican votes, he added $300 billion worth of tax cuts — almost 40 percent of the total stimulus package — which left New Gingrich, the former Republican House speaker, impressed and wondering whether the new president will fight to keep them.

"If they can convince liberal Democrats to drop $300 billion in tax cuts in with $700 billion in spending increases, you know, for liberal Democrats, that's a pretty darn good ratio of tax cuts. And I think you have to stop and say, 'Let me rethink this.' When Obama does something smart, we ought to be for it. We ought to applaud him when he does something that truly shows unusual leadership, and when they do things that are destructive or left-wing, we ought to be pretty tough about it."

There will, no doubt, be plenty of opportunity for that, because no matter how civil and inclusive Washington becomes, traditional ideological divisions are real and in many cases meaningful.

And the Obama team insists that being a postpartisan is not the same thing as being a centrist on all issues or meeting opponents halfway every time.

"I would not describe that at all as splitting the difference," says John Podesta, Obama's transition director. "But he's open to talking to Republicans and trying to bring them on board to try to help shape that program, to try to look for ideas across the political spectrum."

Buy in. That's a big concept with the Obama team. On his very first piece of legislation — the economic stimulus — he's trying to pass a big bill with big bipartisan majorities. And for that, Obama needs "buy in" from both sides. That, in turn, will help lay the political groundwork for his next two big items: transforming the health care system and the way Americans consume energy.

Whether Obama can hammer out the grand bargains needed to pass his big reforms will be the most important test for this self-styled postpartisan politician, Ornstein says.

"No matter how skillful you are at giving something to everybody, no matter how much they feel that they are inside the tent, it's still going to come down to performance: Can you get things passed, enacted into law, and have them begin to have an impact in the country and the world?"

On Tuesday, President-elect Obama will become President Obama and begin working in earnest to accomplish that goal.