Accessibility links
Going With The Flow: Melted Cheese Any way you slice it, cheese is all you need to warm up a cold winter night. Cheddar, gruyere, emmentaler and others lend themselves to soups and sauces or star on their own — sliced and fried, or melted into fondue.

Going With The Flow: Melted Cheese

Going With The Flow: Melted Cheese 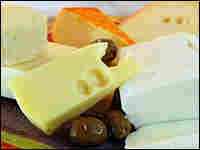 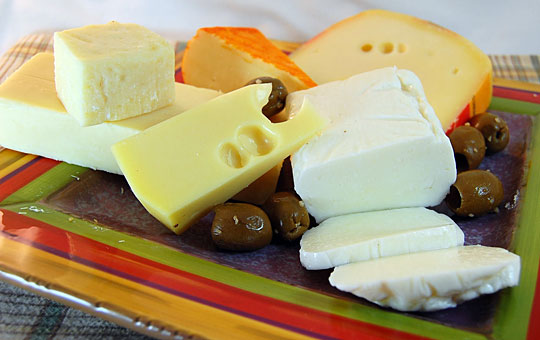 Many moons ago (when I was younger, slimmer and married), my wife introduced me to her favorite snack: a dip made from melted Velveeta and Rotel tomatoes. I know, I know, Velveeta is a cheese purist's nightmare. I agree, but I was young and in love.

Even now, motivated by nostalgia, once a decade I'll buy a bag of Fritos, a can of Rotel tomatoes and a block of Velveeta. After three minutes in the microwave, and with an Amazing Rhythm Aces album on the turntable, I can recapture my 20s for a few minutes. Besides, abomination or not, it's still melted cheese.

Not all cheeses melt equally. Velveeta, being a "prepared cheese product," melts differently than other cheese. It softens, then runs, then skins over when removed from the heat. Even when melted, its texture tends to be rubbery. Real cheeses when heated fall into three categories: flowing, stringy and impervious (or nearly so) to melting.

Feta is an example of a cheese that is not a melter (depending on how the particular feta was made). When I was in college, I had a Lebanese friend who would fry a couple of slices of feta in butter, then stuff them in pita and drizzle them with honey for breakfast. Wonderful stuff. Years later, I discovered the Greek meze (appetizer) saganaki, which is made using a non-melting cheese fried in olive oil and served with a squeeze of lemon.

In these cases, the cheese melts a bit on the outside but largely remains unchanged physically, aside from getting hot.

Then there are stringy cheeses, like mozzarella, provolone, queso Oaxaca and some of the commercial "Swiss" cheeses. They have long protein chains because of the way they're made (which usually involves a step akin to kneading bread), so they melt wonderfully — who doesn't love a pizza slice that refuses to let go of its mother pie? — but they don't flow.

Finally, there are the flowing cheeses, such as cheddar, Cheshire and gruyere. They melt beautifully on their own and with just a bit of added liquid become a beautiful sauce.

When substituting one cheese for another in a recipe, it helps greatly to know what its melting characteristics are. With the exception of saganaki, the recipes below are all geared toward flowing cheeses. They're all outstanding on a cold winter night when the winds are howling, the rain is beating on your door, and the best thing to do is go with the flow. 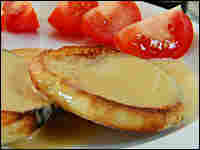 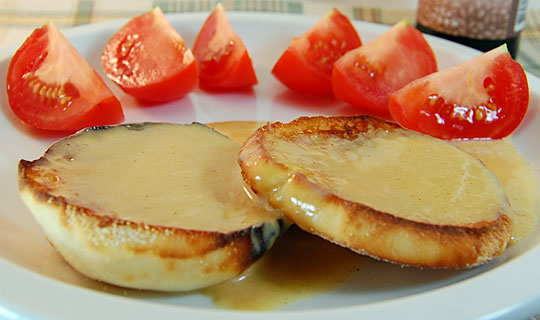 I first had this dish at Chowning's Tavern in Williamsburg, Va., when I was about 10. I fell in love with it and over the years developed my own version, but I had the opportunity to try it again at Chowning's Tavern about eight years ago. It was exactly as my taste buds remembered. The etymology of "rabbit" isn't clear, but the Oxford English Dictionary traces it to 1725, while "rarebit" wasn't used until 60 years later.

Melt butter in a heavy saucepan over low heat. Whisk in cheese a small handful at a time, melting completely before adding next handful, and whisk in a bit of beer as needed to keep the mixture liquid. Add additional beer in small increments until mixture is about the consistency of a thick sauce or gravy. Whisk in remaining ingredients.

Pour over toast or toasted English muffins — my favorite because the holes capture the cheese.

Note: Depending on the cheese and your preferred consistency, you may use more or less beer. 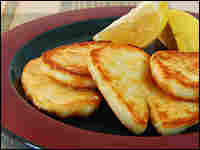 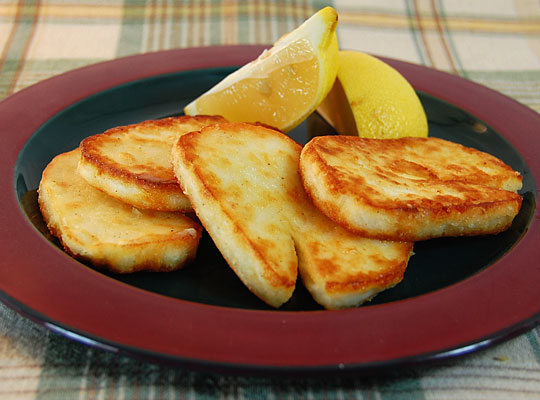 Saganaki may or may not be a melted cheese depending, on which cheese you use, how long it was aged and how it was made. Use kefalograviera, kasseri, haloumi or graviera. I find kasseri and haloumi the easiest to find, and I prefer the milder flavor and chewier texture of haloumi. You can find this at upscale grocers, and I've occasionally seen it in some mainstream supermarkets. I've served saganaki at a number of parties, and it's always a surprise hit to the folks who've never had it before, probably because it's hot, un-melted, salty cheese and a long way from the bland fried mozzarella sticks served at some restaurants. Flambeing saganaki is popular in restaurants, so you can add a couple of tablespoons of warm brandy to the pan (off the fire) if you like and ignite it just before serving.

Serves 4 as a small appetizer

Combine flour, pepper and nutmeg in a small pie plate. Cut cheese into 2-by-1-by-1/2-inch slices and dredge in flour, shaking off excess, then place on a sheet of waxed paper.

Heat oil in a nonstick skillet over medium heat. When oil is hot, dredge cheese in flour again, shaking off excess, and fry in batches until browned — 1 to 1 1/2 minutes per side.

Serve with lemon wedges to squeeze over cheese. 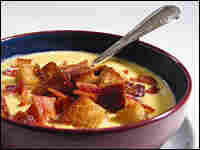 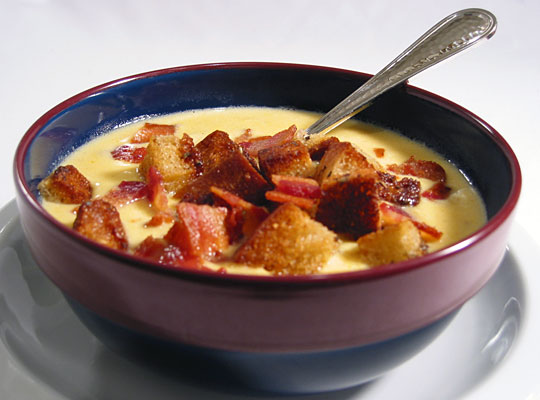 Talk about cheesy goodness on a cold night. This chowder will warm your belly and your soul. I suppose its origins are English, but I first had it at a tavern in Nova Scotia, where ordering cod or lobster made far more sense than cheese soup. But I couldn't resist.

2 cups half and half, warmed in microwave

Cook bacon in a Dutch oven or heavy soup pot over medium heat until medium crisp. Drain and chop coarsely. Set aside.

Whisk in mustard, salt and pepper. Stir in cheese a handful at a time, stirring until melted before adding next handful.

Serve garnished with bacon and croutons.

Toss all ingredients together. Brown in a skillet, tossing occasionally, over medium heat. 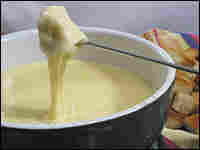 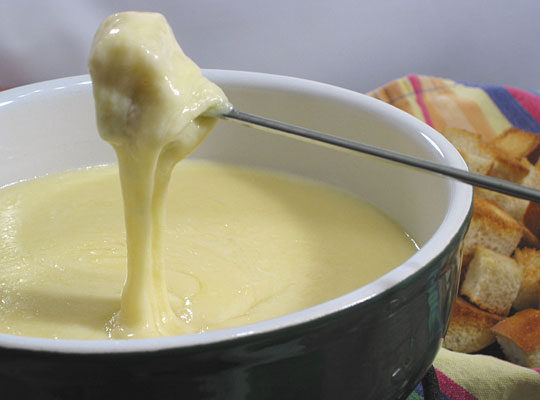 Instead of mixing kirschwasser into the fondue as many recipes call for, the Swiss (at least some of them) serve it in tiny bowls on the side. You dip a corner of your bread in the kirsch, then dip the bread in the cheese. I also like serving fondue with some sliced ham, olives and cornichons (tiny French dill pickles) on the side. According to Swiss lore, you should drink only tea after eating fondue, or the cheese will form an indigestible mass in your stomach. However, I can assure you, another glass or two of wine or a snifter of brandy is not a problem.

Rub garlic clove over inside of large saucepan or fondue pot and discard. Add wine and set over low heat until bubbles begin to rise. (Note: This cannot be hurried.) Gradually add cheese by the handful, stirring after each addition until cheese is melted and you have a smooth, homogenous mixture before adding the next handful. Add pepper and mustard.

There are two schools of thought on the bread: Some like to cut it into cubes and then lightly toast it, while others like to heat the bread and then cube it. I tend to swing toward cubed and lightly toasted because the toasted bread absorbs a bit less kirsch when dipped, and I like the crunch.

Place the bread in a napkin-lined basket. Pour a small measure of kirsch into small cups — espresso cups work well. Dip the bread lightly into kirsch and then swirl in cheese.