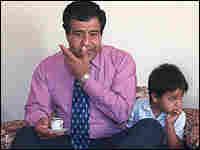 Dr. Izzeldin Abuelaish and his son Muhammed sit at his home in the Gaza Strip in this 2001 file photo. AP Photo/Jerome Delay hide caption

A decade ago, Palestinian doctor Izzeldin Abuelaish — a gregarious man who radiated positive energy — symbolized the hope of Mideast peace.

Dr. Abuelaish lived in an overcrowded refugee camp in the Gaza Strip with 22 members of his extended family, including his wife and eight children. Yet he spent his work week at an Israeli hospital treating Jewish patients. He preached peace and reconciliation, opening his large, though sparsely furnished home to visiting Israelis. For many of those Israelis, their first trip to the territory was spent sitting crossed-legged on the living room floor of his home, drinking thick Arabic coffee with Dr. Abuelaish.

But by last Friday, during the most recent round of bloodshed, Dr. Abuelaish wailed with grief. In doing so, he seemed to represent everything that's gone wrong in the grinding Israeli-Palestinian conflict this decade.

Sobbing into his cell phone, Dr. Abuelaish told an Israeli television station that three of his daughters and a niece had been killed by an Israeli shell that struck his home in the Jabaliya refugee camp near Gaza City. Another daughter and niece were seriously wounded.

"I want to know why my daughters were harmed," the distraught doctor told Israel's Channel 10.

"Today when there was hope for a cease-fire ... I was speaking with my children, (and) suddenly they bombed us," said Dr. Abuelaish.

Recently Dr. Abuelaish had been working part-time at the Tel HaShomer Hospital in Tel Aviv. He was able to use his connections to have his wounded daughter and niece treated there after last week's attack, and to accompany them.

Even as the Israelis and Palestinians have battled throughout this decade, Dr. Abuelaish sought to build bridges.

I first met him in the summer of 2001, when he was working as an obstetrician at Soroka Hospital in the southern Israeli town of Beersheba. The Palestinian uprising was less than a year old, but it had already turned his life upside down.

During the week, he worked at the modern, orderly and well-run Israeli hospital. He lived in a small dorm room attached to the hospital, making his meals on a hot plate. On weekends, he drove 30 miles to his home in Gaza.

He described a recent day in the hospital's in vitro fertilization clinic. He spent much of his time discussing various options with Israeli couples who were having trouble conceiving. Hours later, he called his home in Gaza to check on his children. One of his daughters told him Israeli helicopters were attacking a Palestinian police station a few hundred yards away. "My daughter said, 'We can't sleep, there's bombing going on,'" the doctor said. "There is always anxiety. My mind is always racing."

Despite the turmoil, Dr. Abuelaish was clearly at ease in the presence of Dr. Eyal Sheiner, the Israeli who was the chief resident in obstetrics at the hospital. As they showed me around that day back in 2001, they teased each other and constantly joked, slapping hands after every punch line.

"It can be problematic if we talk politics," Dr. Sheiner said. "But when we are working, we are colleagues. And besides, he's much safer here than when he's in Gaza." Dr. Sheiner, like most Israeli men, was subject to Israeli army reserve duty. He had recently served as a medic not far from Dr. Abuelaish's home in Gaza.

As the fighting intensified, Israel restricted the number of Palestinians who could enter Israel, and Dr. Abuelaish found it increasing difficult to reach his hospital. In 2002, he resigned to attend Harvard University for a year, where he received a master's degree in public health.

He returned to Gaza, only to find conditions deteriorating with each passing year. In 2006, Dr. Abuelaish ran for the Palestinian parliament as an independent, but lost as Hamas swept the polls. He couldn't find a job in Gaza to adequately support his large family, and accepted a one-year contract in Kabul, Afghanistan, with the World Health Organization.

He missed his family and returned to Gaza in 2007. But the downward spiral continued. Just last year, Dr. Abuelaish lost his wife to leukemia.

And then came the latest blow last Friday, as the Israelis and Palestinians neared a cease-fire. At the Tel Aviv hospital where his family was being treated, Israeli doctors who knew Dr. Abuelaish tried to comfort him. Some had tears in their eyes.

Speaking at a press conference, he said of the Israeli leaders: "I count on their professionalism, that they are serious, and they have the courage to say the truth — they committed a mistake."

At one point, he was interrupted by an Israeli woman who said her sons are serving in the Israeli military. "Why is he engaging in propaganda?" she said to the assembled journalists. "You should all be ashamed."

It was another sign that when emotions run high on both sides of the border, those who try to build bridges are hard pressed to find much of an audience.

Greg Myre is a senior editor at Morning Edition. He reported from the Middle East for more than a decade.