Accessibility links
New Trees May Blunt Effects of African Climate In Niger, two devastating droughts have killed hundreds of thousands of people. Climate scientists don't know whether global change will make West Africa wetter or more parched. Growing trees — which Niger is doing — is a way to prepare for either development.

In Niger, two devastating droughts have killed hundreds of thousands of people. Climate scientists don't know whether global change will make West Africa wetter or more parched. Growing trees — which Niger is doing — is a way to prepare for either development. 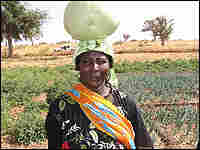 Hasahna, who lives in Adouna, Niger, says drought can mean starvation for many in the Sahel region of Africa. Jane Greenhalgh/NPR hide caption

RICHARD HARRIS: I'm Richard Harris and I'm standing in the shade of an acacia tree that's about 2500 miles South of England. I'm in Niger, which is part of West Africa. It is also part of the area called Sahel, which is a very dry zone just south of the Sahara Desert. And this is a place where a very small change in the atmosphere can lead to a huge change in how much rainfall people get here, and people literally live or die based on how much rainfall they get.

HARRIS: Here in the town of Aduna, women and children gather at the well to fetch water for drinking and cooking. They're only a few hundred miles away from the prime meridian, but a world away from England in wealth and water.

Mr. MOHAMAN LHARWANU(ph) (Ecologist, University of Niamey): Water is life. Yeah. When there is no water, there's no life.

HARRIS: Mohamed Lharwanu says people live here on that treacherous edge. That's because this region has already had taste of deadly climate disruption. It's the kind of trouble that global warming could bring to arid regions around the globe. Lharwanu is an ecologist at the University of Niamey. He says happily, this is a good year. He shows us a lush vegetable garden, a green oasis in this straw yellow land.

Professor MOHAMMAD LHARWANU (Ecologist, University of Niamey): You have tomatoes, onion, seed potatoes and so on, cabbages all over.

HARRIS: These vegetables are nurtured by ground water and hand watering. They add a healthy garnish to the dinner tables in Aduna. But the main food here is millet and sorghum, and the vast fields of grain are completely dependent on rains that fall during the brief wet season.

If the rains don't come, there's simply not enough to eat, so many people either leave or they die. In the 1970s, a quarter of a million people in the Sahel did die as a result of drought. Another drought came in 1984, killing even more.

HARRIS: We meet a woman named Hassanna, who's balancing a large squash on her head. She's too young to remember the earlier droughts, but Hassanna does remember the most recent, in 2005.

HASSANNA: (Through translator) We suffered a lot. Relatives who left the area would send us what little money they had, but it was not enough. And those who had nobody to help would eat one day and starve the next. Sometimes, a neighbor would help. But when none of that happened, the person would just stare at God. You know, when you don't eat, you are in trouble.

HARRIS: Hunger doesn't have to be the future here. People may also be able to adapt to a different climate, but they need to know what to expect. And that's difficult. That's because this area is right at the line where moist, tropical air from the south meets the dry air of the Sahara to the north. Some forecasts say that line will move north, bringing more rain. Others say it will move south and dry out the Sahel.

Mr. GRAY TAPIN (Geographer, Science Applications International Corporation): I've got to see this tree. I want to see it.

HARRIS: Gray Tapin(ph) says, whatever happens, trees could play a big role in how these people adapt to a future climate.

Mr. TAPIN: This is a tamarind tree. It's a - you make great tamarind juice. It's a very marketable cash crop.

HARRIS: Tapin is a geographer with a company called SAIC. He is working with the ecologist Lharwanu and he's helping the U.S. Geological Survey do research that's designed to help people in this region avoid famine when the climate dishes up tough times.

Mr. TAPIN: There are a number of coping mechanisms that allow them to get through one bad year. The real kicker is if you have two or three years of drought, that's where it gets very difficult, that's where the food security -where you see problems with food security.

HARRIS: During the worst of the past droughts, people chopped down most of their trees and sold the wood to buy food. Since that time, Tapin says, people have started to look differently at trees - as a resource they should protect to help them through dry years.

Mr. TAPIN: And if the crops fail, they could at least fall back on the trees, the tree products, the wood and the fruit.

HARRIS: In fact, over the past few decades, villagers in many parts of Niger have planted and nurtured their trees so today Gray Tapin sees huge swaths of green in aerial photos that used to be bleached desert. That gives him some hope that the people here can depend on their trees no matter what happens as the planet warms.

MONTAGNE: You can get a preview of the countries and cultures we'll be visiting over the next year, as well as the global warming issues we'll explore, at npr.org/climateconnection.