Accessibility links
Return To Gaza Reveals Scenes Of Destruction In the Gaza Strip, exhausted Palestinians are surveying devastation following more than three weeks of attacks by the Israeli military. A fragile truce appears to be holding, for now. Throughout Gaza, anger mixed with sorrow as families cautiously took stock of their losses and in some cases buried their dead. 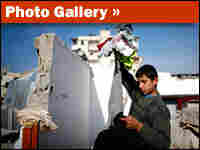 Bilal Soboh, 19, holds the body of his 20-day-old baby girl, who died in the morning, before burial in a grave dug by hand Jan. 19, 2008. The family had tried to get help for the ailing baby but it was too dangerous to leave their home in Tuam, in the northern Gaza Strip during the fighting between Hamas and the Israelis. David Gilkey/NPR hide caption

Maha al-Sultan, 36, cries in agony as she sees her destroyed home for the first time in the Tuam neighborhood of Gaza, Jan. 19, 2009. David Gilkey/NPR hide caption 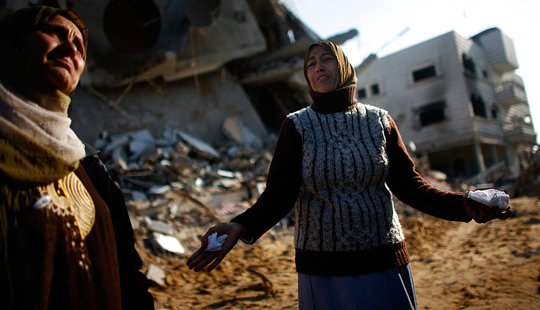 Maha al-Sultan, 36, cries in agony as she sees her destroyed home for the first time in the Tuam neighborhood of Gaza, Jan. 19, 2009.

In the Gaza Strip, exhausted Palestinians are surveying devastation following more than three weeks of attacks by the Israeli military.

At least 1,300 Palestinians are dead and large parts of many neighborhoods are totally destroyed. Thirteen Israelis were killed in the fighting, including 10 soldiers.

A fragile truce appears to be holding, for now. Throughout Gaza, anger mixed with sorrow as families cautiously took stock of their losses and in some cases buried their dead.

'We Cannot Afford A Proper Cover For The Coffin'

Mariam Soboh died Monday morning, 20 days after she was born in a Gaza hospital just after the start of the Israeli offensive against Hamas.

Her parents, Bilal and Kamilia, decided that same day to flee their Gaza home in the face of Israeli shelling. Mariam's grandfather, Mohammed Soboh, spoke about the family's ordeal Monday as an unmanned Israeli drone buzzed overhead.

"Imagine on that Saturday morning she gave birth and in the afternoon on the same day we had to flee our home," he said. "The small baby couldn't stand the cold weather and the smoke from the bombs."

The newborn fell sick as her parents tried to weather the war at a U.N. school that was turned into a refugee shelter. Water and food were limited. It was cold and unbearably stressful. Bilal Soboh says he and his wife couldn't get the baby girl to a health clinic for six days. It was just too dangerous.

Monday afternoon, at a cemetery in the Beit Lahia district, Bilal Soboh wrapped his baby daughter in a white cotton shroud, cradled her in a small blanket and kissed her forehead.

The 19-year-old farmer then lowered his daughter's corpse into a makeshift burial chamber of cinder blocks dug into the sand with a piece of scrap metal for a cover.

"We cannot afford a proper cover for the coffin," he said. "We didn't even pay for the cinder blocks and I was afraid the cemetery guard would charge me for them."

Mariam was Bilal and Kamilia's first child. After the burial they returned to find their home completely destroyed.

"We have no place to stay. We have nothing," the grandfather said.

There were scenes of loss and devastation across Gaza Monday, the first full day of a cease-fire between Israel and Hamas.

'Where Is The Victory?'

In the Tuam neighborhood of Gaza City, 36-year-old Imad Wahbee loaded scraps of splintered wood and mangled kitchen pots on to a horse drawn cart. It is all that's left of his house, leveled by Israeli air and artillery strikes. The neighborhood is in ruins. Whole apartment buildings were destroyed.

Just up the debris-choked road, Maha al-Sultan stood in front of her ruined home, weeping, angry and broken. Sultan belittled Hamas' claims of victory in the confrontation with Israel and she lashed out at the Islamist group's top leaders, who live in exile in Syria.

"Where is the victory Hamas is talking about? Show us the victory!" she said. "We are the only ones dead and destroyed! Where are the burned Israeli tanks and dead soldiers? All I see is our dead! Where is Khaled Mashaal? He's living in a castle in Syria. Let him see our destroyed houses!"

The American-made jets shot off defensive flares and tilted their wings, as if to remind Sultan and others here who still controls the air, sea and land borders into this battered sliver of coastal land.