Accessibility links
Robert Glasper: Jazz For Obama Pianist Robert Glasper wrote the hypnotic "Enoch's Meditation" years ago, for his 2005 album Canvas. He conceived it as a tribute to his colleague, drummer Enoch Jamal Strickland, but reconditioned it in time for Inauguration Day 2009. Hear Glasper perform the repurposed song at the studios of WBGO. 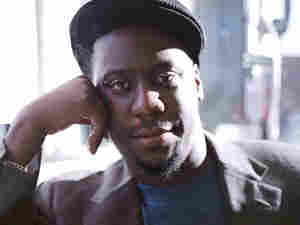 Pianist Robert Glasper wrote the hypnotic "Enoch's Meditation" years ago, for his 2005 album Canvas. He conceived it as a tribute to his colleague, drummer Enoch Jamal Strickland, but reconditioned it in time for Inauguration Day 2009.

The Robert Glasper Trio visited WBGO recently to record the new version, and during the studio session, Glasper set his iPod on the piano. When the trio built to a steady groove in "Enoch's Meditation," he fired the accompanying playlist. The first track is a selection from Martin Luther King Jr.'s "We Shall Overcome" speech from Zion Church in Los Angeles on June 17, 1966. The second comes from Barack Obama's election-night victory speech from Grant Park. (Listen closely midway through Obama's words, as Glasper improvises the harmonies of "Hail to the Chief.") Then, the final audio comes from Dr. Cornel West, echoing the sentiments of Victor Hugo by saying that music "expresses that which cannot be said, and on which it is impossible to be silent."

Glasper himself is rarely silent. The 30-year-old jazz musician and Houston native possesses a gift for harmony which evokes the very best in jazz — that mysterious feeling that rides tandem with American creative genius, the sense of liberation of the body and soul that, according to John F. Kennedy, "finds its greatest flowering in the free society." If anyone out there still doubts that improvisation is a place where all things are possible, that the dream of generations of master musicians is alive in our time, who still questions the power of jazz to capture a moment, this is your answer.