Accessibility links
Texas Newspaper Accused of Tort-Reform Bias A Gulf Coast plaintiffs' attorney is objecting to a new newspaper that started up deep in the heart of Texas' oil refinery country. Brent Coon says the paper — started by tort-reform advocates at a U.S. Chamber of Commerce affiliate — is trying to poison the minds of potential jurors in civil cases. 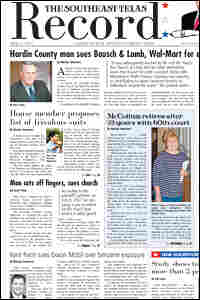 Along Interstate 10, east of Houston, refineries and chemical plants stretch for mile after mile. Those plants represent a lot of good-paying, working-class jobs — and plenty of toxic air pollution to go with them.

Industrial production during the past 70 years has made the Texas coast one of the most litigious regions of the country. Last month, the U.S. Chamber of Commerce started its own newspaper in Beaumont, Texas. The paper focuses exclusively on covering civil lawsuits.

During the first week of April, Beaumont lawyer Brent Coon was in the middle of a case involving a worker who had died from mesothelioma, a cancer usually caused by asbestos exposure. Lawyers for Coon's firm say they saw someone inside the courthouse with a stack of a brand new newspapers, The Southeast Texas Record.

The nature of the stories on the front page of this new paper caused Coon a certain level of agitation.

"This newspaper — I hate to even call it a newspaper; it's a propaganda sheet," Coon says. "The front page had a big article on the tort tax. They had a big article talking about how everybody pays more for everything as a result of awarding damages in personal injury lawsuits."

Among the headlines on the front page of The Southeast Texas Record that day were "Study Shows Tort Costs Total More Than 2 Percent of Gross Domestic Product," and "Man Cuts Off Fingers, Sues Church."

This is not the kind of reading Coon wants jurors or potential jurors perusing as they wait to be called to trial, or take recess while in the midst of deciding a civil case. He says the essence of the newspaper's purpose is political.

"Why would they create a newspaper [and] give it away for free? They do it because they know they send this message out: 'Lawsuits are bad; there are frivolous lawsuits; the jury system has run amok and has to be fixed.' When you hear their rhetoric over and over again, the more they say it and the more different ways they communicate that message, the more the public is likely to believe it," Coon says.

Reaction to the situation probably varies by political persuasion. Conservatives might applaud it, seeing someone trying to print the truth about civil lawsuits in Beaumont. Liberals might be outraged, seeing a crass attempt to influence, if not trick, the jury pool, with corporate propaganda slickly disguised as a mainstream newspaper.

Marilyn Tennissen, editor and lead reporter for The Southeast Texas Record, says no one tells her what to write. She previously was a reporter for the local paper in Port Arthur.

"I don't believe it's jury-poisoning material," she says. "I consider myself a journalist. I consider what I'm doing as printing public information. And that's all I've done."

Tennissen says she realizes her publisher has a strongly held point of view when it comes to the politics of tort reform. But she didn't realize, perhaps naively, that she was going to be drawn into the eye of a certain storm by taking the job.

"I never thought that I was going to be involved in anything that was going to question my [credibility]. It's kind of unbelievable," Tennissen says.

Coon asked Judge Donald Floyd for permission to depose Tennissen to discover whether she purposely distributed the newspaper inside the courthouse. At first, Judge Floyd agreed to allow Coon to depose the reporters. Then he reconsidered, after lawyers for the Chamber protested that the judge's order violated the newspaper's First Amendment rights.

The Chamber of Commerce now runs three newspapers across the country, each located in regions that have litigious reputations: Madison, Ill., the entire state of West Virginia, and now Beaumont, Texas.

Brian Timpone in Chicago is the publisher of The Southeast Texas Record, and he says the paper's reporting is fair and balanced.

"Our stories are as straight and as objective as any stories in America. Just because the owners of the paper have an agenda doesn't mean that the content can't be fair," Timpone says.

He says the U.S. Chamber of Commerce intends to defend its newspaper against all attacks. Coon says his initial legal maneuvers against The Southeast Texas Record were just an opening salvo.

The political leanings of the region will help Coon. Unlike other parts of Texas, the Golden Triangle has a history of 70 years of union organizing. The match-up of organized people vs. organized money promises to make this a good fight.