Accessibility links
Putting Obama's Historic Day Into Words The inauguration of Barack Obama as the 44th president and the first African-American to hold that high office sparked heartfelt reactions from people huddled on the National Mall in Washington and those watching around the country and the world. 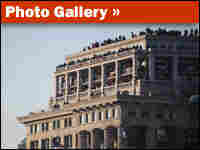 The inauguration of Barack Obama as the 44th president and the first African-American to hold that high office sparked heartfelt reactions from people huddled on the National Mall in Washington and those watching around the country and the world.

A sampling of what people had to say follows:

"On this day, we gather because we have chosen hope over fear, unity of purpose over conflict and discord." -- President Barack Obama, in his inauguration address

"I'm just elated to show him this. ... I'm just so happy it happened in my lifetime and in his." -- Postal Supervisor Ronell Gilbert speaking of her 12-year-old son, Brian, in a gathering in New York's Harlem neighborhood

"I think it's a moment of bringing the country together ... inaugurations are very important as a reminder that in the end, we are all Americans and that we are bound together by far more than we're divided. -- Former House Speaker Newt Gingrich

"Starting today, we must pick ourselves up, dust ourselves off, and begin again the work of remaking America." -- President Barack Obama, in his inauguration address

"I've seen the remnants of peoples' lives. I've seen the people who have left things behind. And we need a change. I have hope now, and I think the nation has hope." -- Real estate appraiser Denise Grandberry of St. Louis, attending the inauguration in Washington

"We ask you to help us work for that day when black will not be asked to get in back, when brown can stick around; when yellow will be mellow, when the red man can get ahead, man; and when white will embrace what is right. That all those who do justice and love mercy, say Amen." --the Rev. Joseph Lowery, ending his benediction during the inauguration ceremony

"If there's any comparison I can make, it's like there's been a royal wedding here today." -- NPR reporter Gwen Thompkins in Kobama, Kenya, the former village of President Obama's grandfather

"Like every other American, I'm just going to marvel at the way we do business, and hats off to President Obama. He ran a marvelous campaign, and it was no easy road for him to get here, so this is his day, and I'm going to enjoy it with him." -- Sen. Lindsey Graham (R-SC), who campaigned for Sen. John McCain, the Republican presidential nominee

"I often thought this country might end up being a great country for my grandkids. Now, I believe it can be a great one for my kids." -- Sean Pittman, a Tallahassee, Fla., lawyer attending the inauguration in Washington

"I'm as excited as people the world over. This represents the fulfillment of a longtime dream. It represents a sea change in American politics, and I think the fact that he has African roots excites us all. And it tells everyone that they can reach their full potential if they are willing to work at it." — Liberia's Ellen Johnson-Sirleaf, Africa's first female president

"For our kids, of course there is a sense of pride. It knocks down all of the barriers, all of the crutches ... . This could be your destiny as well ... . Hopefully, there will be more African-American, women and Latinos running for this office." --Willy Wright, on the National Mall.

"I don't agree with [President Obama] politically. But this is an historic day for our nation. There was a time when I wouldn't have been allowed to serve blacks in my restaurant. Now, we have a black president." -- Barbara Elkins, a resident of Coalgate, Okla.

From NPR Staff and wire reports