Accessibility links
In Britain, a Farming Past of Golden Moors, Vineyards Once upon a time in Britain, moors were covered in golden wheat and vineyards flourished. Now, farmers are flirting with England's first tea crop. What gives? The archaeological record shows that as temperatures shift, farmers try out new crops in new lands.

In Britain, a Farming Past of Golden Moors, Vineyards

In Britain, a Farming Past of Golden Moors, Vineyards 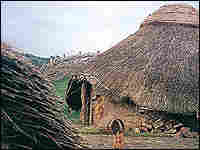 Britain's population in the Bronze Age was mostly rural, composed of small villages of roundhouses, like this re-creation. Crops and grain were stored in similar structures. James Balme, Warburtonvillage.co.uk hide caption 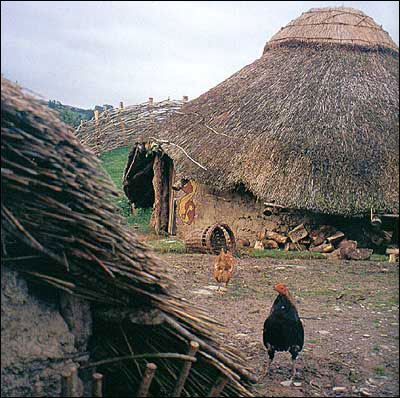 Britain's population in the Bronze Age was mostly rural, composed of small villages of roundhouses, like this re-creation. Crops and grain were stored in similar structures. 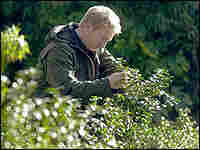 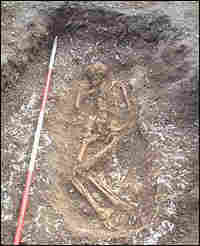 Gravesite of a villager, dated to the beginning of the medieval warm period. Nic Heasman, Ukagriculture.com hide caption 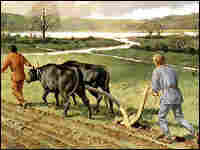 The British really love their tea. It often trumps coffee in the morning, and in times of crisis, a cup of tea is the first thing Brits reach for. But one crucial detail has kept it from being the "true" national beverage: Britain's climate is unfit to grow it. Every leaf in every bag must be imported from somewhere else. That is, until now.

Last summer, Ian Pearson, Britain's minister of state for climate change and the environment, urged British farmers to "seize opportunities for new crops that a changing climate is going to bring."

Pearson spoke of soybeans filling English fields, of land in cold, wet climes — long unsuitable for farming — soon blossoming under the plow. He even bragged about England's very first homegrown tea crop, now growing in Cornwall, in the southwest of the country.

But Pearson's visions aren't merely futurist dreams; some were once reality in Britain's much warmer past.

Some 7,000 years ago, during the Bronze Age, the average temperature in Britain rose almost 4 degrees Fahrenheit above today's norms.

Martin Carruthers, an archaeologist at Orkney College of the University of the Highlands, says he usually turns to social and cultural explanations for historical agricultural changes. But he says it's hard to deny that the balmy Bronze Age significantly altered land use, allowing ancient farmers to bring their crops to previously uncultivated areas.

For instance, golden fields of wheat and barley flourished in the soggy, scrubby upland moors that are strewn throughout Britain's higher elevations. In today's climate, those areas are wholly unsuitable for farming.

"We've never really seen the same expanse of territorial ground covered in Britain since the tail of the Bronze Age," he says.

But as the Bronze Age closed, around 700 B.C., the climate cooled and steady rains returned. Moors and bogs retook the land, and the farmsteads of northern Britain were abandoned, becoming relics for archeologists to discover thousands of years later, buried under layers of peat. Carruthers says the transition happened so quickly, it became known as the Bronze Age crash, and is seen as evidence for the swift and dramatic effect climate changes can have on agriculture.

"It is very much the period that most people would think of immediately as far as farming responding to climatic changes," Carruthers says.

Agriculture boomed again during the Middle Ages, when Britain entered a long stretch of stable, mild weather. Farmers once more flirted with the edges of the upland moors. Wine grapes were brought into the country and cultivated much further north than today's climate permits. Partly in response to the bounty, the population skyrocketed. But trouble was again on the horizon in the form of another cooling event, one that would last 500 years and come to be called the Little Ice Age.

In his book, The Little Ice Age: How Climate Made History 1300-1850, Brian Fagan chronicles the effects of this period, starting with the Great Famine of 1315. That year, areas of atmospheric high pressure over Iceland and lows over the Azores Islands switched places. Instead of bringing warm Atlantic winds into Britain, this new climate system brought winds in from places like Siberia and the North Pole. Winters became bitterly cold, and it rained so often that fields turned into shallow lakes before they could be planted. Entire harvests were laid to waste.

Millions of people died from starvation and disease, their plight compounded by extreme poverty and an ineffective government. The famine lasted for seven years, until the pressure system in the North Atlantic reversed.

But that didn't mean stability. In fact, weather patterns became more erratic, bringing on the Little Ice Age that, among other things, pushed farmers back out of the moors and led to the abandonment of England's wine industry.

It is another example that, as Fagan writes in his book, "humanity has been at the mercy of climate change throughout its entire existence."

Case in point: the Tregothnan Estate in Cornwall. It's producing a flagship tea crop in a climate that resembles India more than England.

Jonathan Jones, head gardener at the estate, says his corner of Britain has always enjoyed a mild climate. He wasn't even thinking about climate change, he says, when he planted his first tea bushes in 1996. Still, Jones says, the last few years have been milder and warmer — and particularly good for growing tea.

"[We're] not seeking climate change," says Jones, "but if what we've been experiencing is warming, then so far it's been beneficial."

Of course, history has shown that such perfect climate conditions are never guaranteed in Britain. In fact, the latest report from the International Panel on Climate Change predicts the current warming will mean dwindling summer rains and unpredictable weather patterns. Both are a concern for farmers like Jones, who would prefer no change at all.

"Trouble could be brewing if we got lots of dry summers," he says. "And of course ,we also don't want frost during the growing season."

But for now Jones is enjoying the weather, proud to be the first farmer offering, "English tea grown on English soil."