Accessibility links
Senate Seen Approving Geithner After Tax Apology The Senate Finance Committee is expected to approve Timothy Geithner to be Treasury secretary after he apologized for failing to pay tens of thousands of dollars in taxes. Geithner is considered crucial to the new Obama administration in dealing with the global financial crisis. 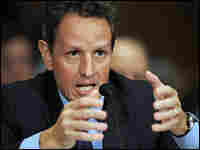 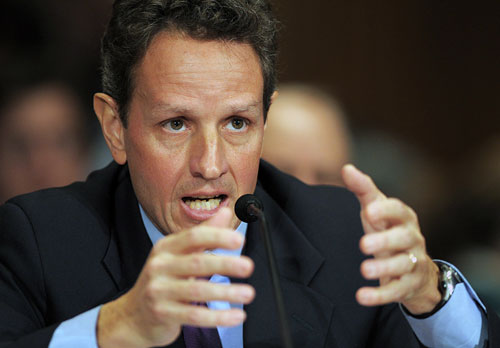 Timothy Geithner testifies Wednesday before the Senate Finance Committee on his nomination to be Treasury secretary.

The Senate Finance Committee is expected to approve Timothy Geithner to be Treasury secretary after he apologized to the panel Wednesday for failing to pay tens of thousands of dollars in taxes. Geithner is considered crucial to the new Obama administration in dealing with the global financial crisis and tight credit conditions that have choked the economy.

Despite sometimes intense interrogation from senators of both parties, Geithner is expected to win the committee's backing when it meets Thursday and be confirmed by the full Senate next week.

Geithner said his mistakes were careless and avoidable but "completely unintentional." He apologized to the committee and said, "I should have been more careful."

Geithner told the panel that the new administration must address a "catastrophic loss of trust and confidence in the global financial crisis" and get credit flowing again.

He acknowledged growing unhappiness in Congress and among taxpayers over how the $700 billion financial bailout money has been spent thus far by the outgoing Bush administration.

Geithner said that Obama and he believe the bailout program needs serious reform. "Our test is to act with the strength, speed and care necessary to get our economy back on track," he said.

Geithner's confirmation came into doubt after the disclosure last week that he did not pay tens of thousands of dollars in taxes for Social Security and Medicare while he was employed by the International Monetary Fund. In addition, he employed a housekeeper who lacked proper documents for the last three months of her employment.

In different economic times, Geithner's confirmation might have been derailed by the news that he only recently paid more than $48,000 in delinquent taxes and interest for his earnings while working at the IMF.

Geithner paid some of the taxes in 2006 after an IRS audit discovered the discrepancy for the years 2003 and 2004.

The Senate Finance Committee hearing on Geithner's nomination scheduled for last week was postponed until Wednesday after some senators demanded more time to consider the controversy.

But with the economy so fragile, and with Geithner's strong qualifications and domestic and international profile, most senators chose to address his tax issues delicately.

Charles Grassley (R-IA) dug deepest into the tax lapse and asked Geithner which software he used to prepare his taxes during the years in question. After saying the mistakes were his and not the software's, Geithner told the committee he used TurboTax.

As Treasury secretary, Geithner would be tasked with overseeing a mammoth rescue of the nation's economy.

In the past year, the Fed lent out more than $1 trillion in its efforts to stabilize the financial and credit markets. The Obama administration is finalizing its plans for the second part of the $700 billion Troubled Assets Relief Program.

In recent days, President Obama's top economic advisers have made a concerted push to convince congressional leaders and the public that Obama will manage the TARP program in a different way than the Bush administration.

Former President Bush committed most of the initial $350 billion of the TARP to capital injections at financial institutions but required little oversight in their use of the funds.

The Obama administration has said it will focus more on helping consumers, local governments and businesses than on helping banks.

Geithner took pains not to put a price tag on the administration's efforts to further stabilize the markets but said "we want to work with members of Congress in a bipartisan way to address these serious issues."

Geithner, 47, rose from a low-level job in the 1980s to Treasury undersecretary for international affairs under President Clinton. He later was a director of the IMF before becoming president of the New York Fed in late 2003.

In the Fed position, he played a significant role in recent efforts to calm roiled financial markets and is believed to have been a central player in the Bush administration's rescue and sale of Bear Stearns and the bailout of insurance giant American International Group Inc.

"You will be confirmed," Sen. Pat Roberts (R-KS) told Geithner. But Roberts said his phones were "ringing off the hook" from people in Kansas complaining about the prospects of having a Treasury secretary who was careless in tending to his own tax liabilities.

There were several tense exchanges. Sen. Jim Bunning (R-KY) delivered some of the strongest criticism of the day, saying Geithner was "involved in just about every flawed bailout" implemented by the Bush administration. Bunning said the tax mistakes were his biggest worry, saying his research showed the IMF makes such tax payment requirements clear to all employees.

In a later exchange with Sen. Ron Wyden (D-OR), Geithner made a minor mea culpa, saying the New York Fed should have watched financial institutions more closely in recent years.

"Should your supervision have been more effective?" Wyden asked.