Accessibility links
For Inaugural, Congress Suspends Party Divisions President Obama and Vice President Biden were sworn in Tuesday on the steps of the Capitol, where both had served as senators. For many Republican lawmakers, national pride trumped political loyalty on Tuesday.

The inaugural backdrop, the U.S. Capitol, reminds us that Congress organizes the show for each new president – and afterward, the executive and legislative branches may or may not work together. In this case, lawmakers were welcoming a former member of the U.S. Senate.

For many Republicans, national pride trumped political loyalty on Tuesday.

Take Sen. Lindsey Graham (R-SC), one of Sen. John McCain's most outspoken advocates on the campaign trail last year. "This is a day of transition of power. ... There are millions of people out there who are just smiling from ear to ear, and it's infectious," Graham said. "The spirit of the day — I hope it lasts well beyond today. ... Hats off to President Obama. He ran a marvelous campaign, and it was no easy road for him to get here, so this is his day, and I'm going to enjoy it with him."

Former GOP House Speaker Newt Gingrich described the inauguration as "a moment of bringing the country together. I think inaugurations are very important ... as a reminder that in the end we are all Americans and that we are bound together by far more than we're divided." 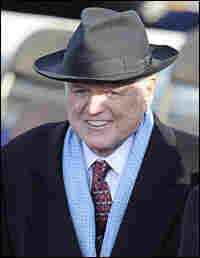 Sen. Ted Kennedy arrives for the inauguration of President Obama. The Massachusetts Democrat was later taken to a hospital after collapsing at a luncheon at the U.S. Capitol. Timothy A. Clary/AFP/Getty Images hide caption

Edward M. Kennedy was chatting with his tablemates during a post-inauguration luncheon in honor of President Barack Obama when, according to fellow senators, he suddenly stopped speaking.

That's the same thing that happened during his earlier seizures — one in May that was the first sign of a malignant brain tumor and one last summer. Kennedy's tumor was in an area of the brain that controls speech.

Experts say such seizures are common in patients who have suffered brain tumors. Surgery to remove such tumors, which Kennedy underwent last summer, also leaves patients prone to recurrent seizures.

Kennedy's office released a statement from neurosurgeon Edward Aulisi, who treated the 76-year-old Massachusetts senator at Washington Hospital Center. "After testing," Aulisi said, "we believe the incident was brought on by simple fatigue." He added that Kennedy "will remain at the Washington Hospital Center overnight for observation, and will be released in the morning."

Kennedy's wife, Vicki, and son, Rep. Patrick Kennedy (D-RI), were with him at the hospital, where he was rushed by ambulance.

Experts said one detail in particular is encouraging: Soon after arriving at the hospital, Kennedy was awake, talking with his wife and son, and "feeling well," according to doctors. More severe seizures are often followed by what doctors call a "post-ictal period" of confusion and drowsiness.

"Clearly, it's much better if the patient is alert and awake," says Dr. Keith Black, chief of neurosurgery at Cedars-Sinai Medical Center in Los Angeles.

The Washington neurosurgeon's reference to "testing" was also encouraging to outside experts who were trying to interpret Kennedy's seizure. It suggests that doctors must have determined there was no evidence on brain scans that Kennedy is suffering from an obvious regrowth of the brain tumor, called a glioblastoma, that caused his first seizure last May.

Experts say doctors certainly would have done tests to determine if the level of anti-seizure medications in his blood were too low. That could lead to a decision to increase the dosage or switch to a different medication. But there's no indication, so far, that this caused Kennedy's seizure.

While it is possible that a seizure can signal the regrowth of the original tumor — a thought that surely crossed many people's minds — some experts caution against leaping to that conclusion.

Dr. Walter Koroshetz, deputy director of the National Institute of Neurological Disorders and Stroke, says that these days doctors will perform scans on patients with prior brain tumors every couple of months to check for early evidence of regrowth. So they're less likely to be surprised by a seizure as the first sign of a recurrence.

Sen. Jay Rockefeller (D-WV) told reporters that Obama noticed when Kennedy became ill and rushed over to his table.

"There was a call for silence throughout the room," he said.

"The president went over immediately. The lights went down, just to reduce the heat, I think."

In his remarks, Obama said his prayers were with the stricken senator and his family.

"He was there when the Voting Rights Act passed, along with John Lewis, who was a warrior for justice," the newly inaugurated president said.

"And so I would be lying to you if I did not say that right now a part of me is with him. And I think that's true for all of us," Obama said.

Sen. Robert C. Byrd, 91, also left the luncheon early, but his office and others said his health was not the reason.

Byrd "is currently in his own office ... and is doing fine, though he remains very concerned about his close friend, Ted Kennedy," said Mark Ferrell, a spokesman for the West Virginia Democrat.