Accessibility links
Obamas Could Have Danced All Night President Obama escorted his wife to 10 official inaugural balls Tuesday night. Each one had a theme — such as the Youth Ball and the Armed Forces Ball. Six were held at the Washington Convention Center.

Listen
Obamas Could Have Danced All Night

President Obama escorted his wife to 10 official inaugural balls Tuesday night. Each one had a theme — such as the Youth Ball and the Armed Forces Ball. Six were held at the Washington Convention Center. 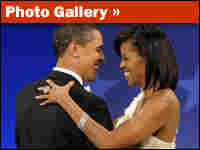 The president and first lady went to all 10 official inaugural balls. Each had a theme - the Youth Ball, the ball for the Armed Forces. NPR's Elizabeth Blair was at the Home States Ball where the Obamas danced.

ELIZABETH BLAIR: A little after 8 p.m. as President Obama took the stage, hundreds of digital cameras went up in the air. He told the guests from Illinois and Hawaii they were a special crowd.

INSKEEP: So many of you got involved, not just in my campaign, but got involved in our lives many, many years ago. You're not new friends, you're old friends. And for that we are grateful to you.

BLAIR: President Obama looked a little tired but genuinely happy to see his home state's crowd. Michelle Obama was dressed in a radiant white-chiffon gown designed by 26-year-old Jason Wu. The first couple danced only briefly, but Michell Obama gave the crowd a kind of knowing smile. It looked like she was dancing at a party with close friends.

M: I think the first couple are ordinary people. They're regular, ordinary, nice folks, and they are part of the Chicago community.

BLAIR: Joy Cunningham from Chicago worked on the Obama campaign. She says it's easy for folks in the Mid-West to identify with the first couple. The Home States Ball was held in a huge room at the Washington Convention Center, spacious enough for the thousands of guests dressed in tuxedos and elegant gowns. Last night's celebration stirred up a lot of pride in people from Illinois and Hawaii.

BLAIR: Walter Dodds from Honolulu is a retired chairman of First Hawaiian Bank, he did some fundraising for the Obama campaign.

M: If you know anything about Hawaii, the Aloha Spirit involves a unique perspective on the way we treat other human beings. In Hawaii, everybody is an ethnic minority, and we've learned a lot about how to deal with each other. And Obama - Senator Obama, now President Obama, I think he projects it.

BLAIR: For many people attending the Home States Ball, campaign contributors, volunteers, the politically well-connected, last night was the culmination of a very long campaign. At the end of the night when almost everyone had left, the velvet-blue lighting of the evening was replaced by harsh bright lights so that workers could clean up. Reggie Forman(ph), a housekeeper at the Washington Convention Center is sweeping up what the revelers left behind.

M: Cups and bottles, and everything else, you know. It shows you right there they had a good celebration. And that's what we all - that's what you want to see.

BLAIR: This was the end of a very long, very full, and very cold day in the nation's capital. Elizabeth Blair, NPR News, Washington.

M: We will sweep up.

INSKEEP: You have a chance to relive yesterday's Inauguration, including videos, photo galleries, and commentary. And you can take a closer look at inaugural fashion by going to our website npr.org. It's Morning Edition from NPR News. I'm Steve Inskeep.