Accessibility links
NPR News Special: Barack Obama's Inauguration After taking the oath of office with his hand on Abraham Lincoln's Bible, President Barack Obama called the nation to remake America. More than one million people gathered on the National Mall to witness history on Tuesday.

After taking the oath of office with his hand on Abraham Lincoln's Bible, President Barack Obama called the nation to remake America. More than one million people gathered on the National Mall to witness history on Tuesday.

Barack Hussein Obama was sworn in Tuesday as the 44th president of the United States, writing a new chapter in American history as the first African-American to hold the nation's highest office. 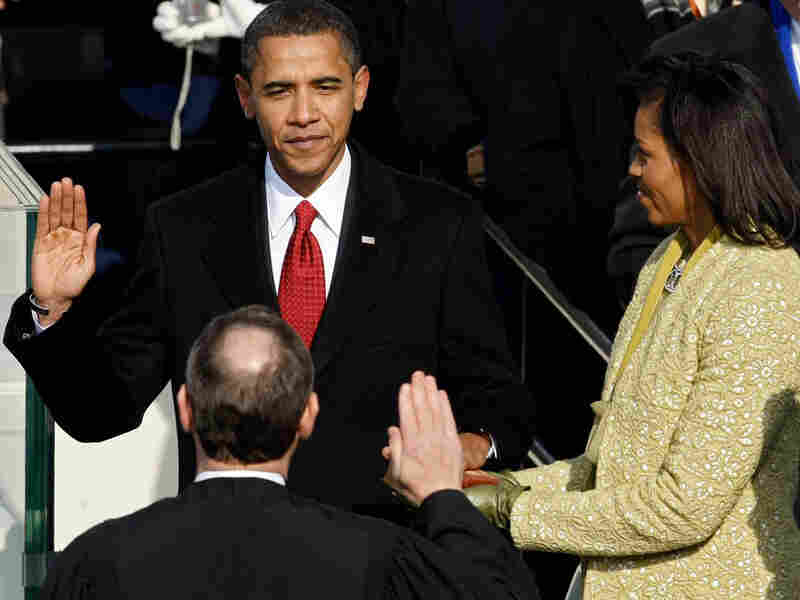 With his hand on the gilt-edged, burgundy Bible used by President Lincoln in 1861, Obama swore to "preserve, protect and defend" the Constitution in front of an ebullient, possibly record-breaking crowd gathered on the National Mall.

"Earlier generations faced down fascism and communism not just with missiles and tanks, but with sturdy alliances and enduring convictions," he told the crowd in his inaugural address. "They understood that our power alone cannot protect us, nor does it entitle us to do as we please. Instead, they knew that our power grows through its prudent use; our security emanates from the justness of our cause, the force of our example, the tempering qualities of humility and restraint."

Obama Reaches Out To Muslims

"To the Muslim world, we seek a new way forward, based on mutual interest and mutual respect," said Obama, who spent part of his childhood in Indonesia, the most populous Muslim nation in the world. But he also had a warning for those who would threaten the American way of life through terrorism.

"We say to you now that our spirit is stronger and cannot be broken. You cannot outlast us, and we will defeat you," he said.

On the economy, Obama said his plan for rebuilding and expanding the country's infrastructure will take the U.S. economy into a new age.

"The state of the economy calls for action, bold and swift, and we will act -- not only to create new jobs, but to lay a new foundation for growth," Obama said.

Obama was sworn in on a platform on the West Front of the Capitol as a crowd estimated by The Associated Press at more than 1 million people looked on. The enthusiastic masses packed the Mall in the hours leading up to the ceremony, braving temperatures in the teens early Tuesday morning.

People began making their way to the Mall before 6 a.m., with some trains packed to capacity by the time they reached stops in Washington. Nearly 874,000 people had ridden the rails of Washington's transit system as of 5 p.m. Tuesday. Tens of thousands of people were shuttled to the Mall on 23 bus routes.

Despite the crowds and the cold, spectators were energized. Dozens of vendors hawked everything from Obama T-shirts to Obama hand puppets as groups of people trekked down Massachusetts Avenue toward the Mall.

Sachiko Minowa was glowing as she walked downtown in 20-degree weather. A Japanese immigrant who now lives in San Francisco, Minowa said she has eagerly awaited the change in administrations. "I came to the United States five years ago," she said. "This is the moment I've been waiting for."

Another woman said the inauguration was the perfect present for her 33rd birthday.

"I've felt under siege the last eight years," said South Bend, Ind., resident Willow Wetherall. "I can breathe easier knowing I have a partner in Washington who represents my values."

The new first family began Tuesday with a church service at St. John's Episcopal Church, across Lafayette Park from the White House. The Obamas traveled to the White House for a traditional coffee with Bush, then to the Capitol for the swearing-in ceremonies.

After the transfer of power, former President George W. Bush and his wife, Laura, boarded a helicopter at the Capitol and flew to Andrews Air Force Base, where they boarded a military jet for the trip to their new home in Texas.

Following the swearing-in ceremony, a parade in Obama's honor wound its way more than a mile and a half through the streets of Washington.

Twice, Obama and his wife, Michelle, got out of the presidential motorcade and walked along the parade route, waving to tens of thousands of cheering, flag-waving supporters. Following the Obamas' lead, Biden and wife Jill also walked part of the route, waving and smiling at the joyful crowd.

Later that evening, the Obamas made an appearance at the first of 10 official inaugural balls they planned to attend.

At the Neighborhood Inaugural Ball, Obama and the first lady, who wore a white, one-shouldered gown, danced to the Stevie Wonder hit "Signed, Sealed, Delivered," a cornerstone of his campaign rallies.

"First of all, how good-looking is my wife?" Obama asked the crowd of celebrities and supporters alike.

Linton Weeks and The Associated Press contributed to this report.