Accessibility links
Demand Increases for Women to Join Afghan Police Tradition and a conservative interpretation of Islam relegate most women in Afghanistan to the role of subservient wife and mother. But in at least one province, demand is high for women to fill a role previously reserved for men: police officer. 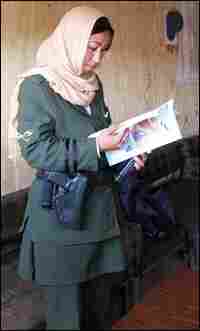 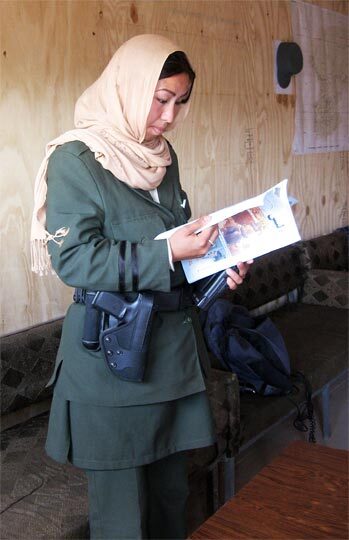 Detective Nahid Rezaie pages through a magazine before an interrogation at Bamiyan police headquarters. 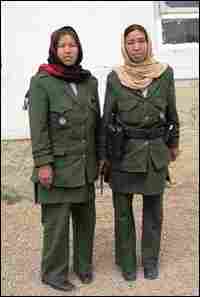 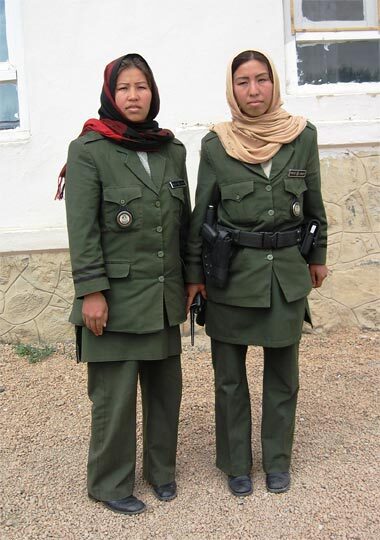 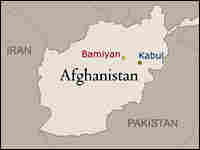 The role of women in Afghan society is a complex one. Tradition and a conservative interpretation of Islam relegate most women to the role of subservient wife and mother. Daughters in Afghanistan are often sold or traded into marriage to strengthen tribal ties.

But the new, democratic Afghanistan is under pressure to give women the same opportunities that men have — such as allowing them to become police officers.

During the Taliban era, watching an action thriller about a karate-savvy, female detective could cost you your life. But these days, the heroine of the film Ghanoon (Law) is a role model to Nahid Rezaie.

She has no real Afghan women detectives to look up to. That's because Rezaie is the first female detective in her province of Bamiyan.

The 23-year-old mother of three, who carries a handgun and wears a traditional veil, says she'd love to save the day like her fictional role model.

But on a recent day, Rezaie sits in a plywood office at police headquarters, interrogating a 50-year-old woman accused of hitting a neighbor. The suspect, Golshah, claims that she merely defended her daughter from a neighbor who hit her on the way home from school.

Rezaie, who addresses the boy in a motherly tone, orders him to tell the truth. The frightened boy stares at the detective, ready to burst into tears. He blurts out that his sister wasn't hit, only threatened after she cursed at the neighbor. He shyly confesses to pulling the neighbor's hair.

Rezaie takes the boy's thumb and presses it onto a red inkpad, then onto his statement that she's written down. She turns to his mother, her eyes narrowing. Rezaie orders Golshah to find a storeowner known to the family. He will serve as the Bamiyan equivalent of bail.

She tells Golshah that if she fails to show the next day, the storeowner will be arrested.

Rezaie's ability to get to the bottom of the dispute is one of the things that makes Gen. Sayed Akbar Saeedi happy to have women in his department. The head of the provincial police force boasts that his eight female officers give him the highest percentage of women on any police force in Afghanistan.

"In Afghan society, where religious values dominate, it's no surprise to find reluctance over women becoming police officers," Saeedi says. "But in Bamiyan, most residents are liberalized because they lived abroad during the Taliban era. Bamiyan is also a center of police training, so girls we recruit don't have to go far from home."

Saeedi adds that he'd like to hire up to 100 policewomen. He says they are needed to handle crimes involving women, given that men refuse to let other men see female relatives.

That doesn't mean women are always happy to see Rezaie. Five months ago, she suffered a broken hand while trying to arrest a female suspect. Rock-throwing villagers also cracked the skull of Rezaie's husband, Mohammed Zahegh.

But it hasn't dampened his enthusiasm for her chosen career. He is a driver for the police force and often drives Rezaie to her cases.

"I'm very happy, really," Zahegh says. "I hope she gets promoted. We may have been hurt that time, but we brought the suspect and everyone else in."

Rezaie says she wants to be the best officer in Bamiyan. She says she owes it to her people. Like most residents of this province, she is a member of Afghanistan's Hazara minority, Shiite Muslims descended from Mongol invaders.

"I want to break the stereotype of this province as being poor and unaccomplished," she says. "We may be poor, but we show that we have the will to serve."

New Zealand police officers who train Afghans in Bamiyan say they are impressed with the women's dedication. But as open as Bamiyan may be to having policewomen, conservative traditions do get in the way.

"Definitely one of the challenges is having them physically take part in some of the training," New Zealand police officer Claire Robertson says. "For example, drill [marching in formation] — some of them would like to do it, but it's almost frowned upon."

Robertson says it took a lot of negotiating to allow women to take part in drill. It's not considered a dignified activity for Muslim women in public.

Nor is physical fitness. Robertson says she had to clear the classroom of 28 male trainees so the women could exercise. Nevertheless, Robertson says Bamiyan's policewomen are impressive.

She jokes that they are so good, she's almost out of a job.