Accessibility links
Meetings Dominate Obama's First Day President Barack Obama's first day in office began with a prayer service at the National Cathedral. He then got down to business at the White House, signing several new executive orders and meeting with his economic advisers and the National Security Council.

President Barack Obama's first day in office began with a prayer service at the National Cathedral. He then got down to business at the White House, signing several new executive orders and meeting with his economic advisers and the National Security Council.

From NPR News, it's All Things Considered. I'm Robert Siegel. A photograph of President Obama taken today in the Oval Office reveals a nearly empty desk. But Mr. Obama's first full day as president was a busy one. It included issuing an executive order that sets new ethics rules regarding his staff's dealings with lobbyists. He met with military advisers, and he made phone calls to leaders in the Middle East. As NPR's Don Gonyea reports, the day began with prayer.

DON GONYEA: After a long historic inauguration day and night, President Barack Obama was at the National Cathedral this morning participating in a Washington tradition dating back to George Washington, the presidential inaugural prayer service.

(SOUNDBITE OF SONG "HE'S GOT THE WHOLE WORLD IN HIS HANDS")

GONYEA: That song, performed by Washington's Children of the Gospel Choir, is one we've all heard countless times. On this day, its words took on even greater meaning as Mr. Obama watched from the first pew.

(SOUNDBITE OF SONG "HE'S GOT THE WHOLE WORLD IN HIS HANDS")

GONYEA: The service featured prayers and readings by Christian, Jewish, Muslim and Hindu religious leaders. The theme of the program was renewal. There were blessings from Mr. Obama and his family. In the sermon delivered by the Reverend Sharon Watkins, there was a recognition in a playful, but still appropriate way of the many serious problems now his to confront.

SIEGEL: Mr. President, tag, you're it.

(SOUNDBITE OF SONG "AMERICA THE BEAUTIFUL")

OF THE GOSPEL CHOIR: America, God shed his grace on thee...

GONYEA: He followed that action today with a gathering of senior staff in an auditorium at the Eisenhower Executive Office building. There he announced several moves, including one designed to send a symbolic message to the American people during hard times.

OF THE GOSPEL CHOIR: During this period of economic emergency, families are tightening their belts and so should Washington. That's why I'm instituting a pay freeze on the salaries of my senior White House staff.

GONYEA: The freeze will affect about 100 White House employees whose salary is more than $100,000 a year. And there was another presidential memorandum regarding transparency and open government. During the campaign, candidate Obama often criticized the secrecy and behind closed-doors dealings of the Bush administration.

OF THE GOSPEL CHOIR: That era is now over. Starting today, every agency and department should know that this administration stands on the side not of those who seek to withhold information, but those who seek to make it known. To be sure, issues like personal privacy and national security must be treated with the care they demand. But the mere fact that you have the legal power to keep something secret does not mean you should always use it.

V: I, your name, repeat your name please, do solemnly swear or affirm.

GONYEA: So it was a first day of substance and symbolism from Mr. Obama, even as he and his staff adjust to their new surroundings. Don Gonyea, NPR News, the White House. 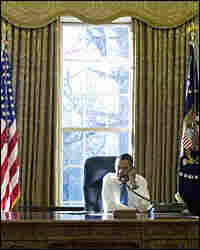 President Obama talks on the phone in the Oval Office on Wednesday, the first full day of his administration, in this handout photo from the White House. Pete Souza/Getty Images hide caption 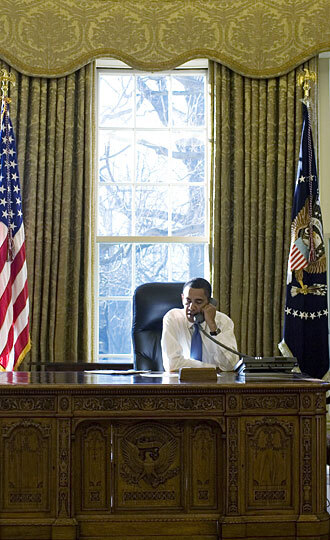 President Obama talks on the phone in the Oval Office on Wednesday, the first full day of his administration, in this handout photo from the White House.

Full coverage of Tuesday's ceremony, parade and other festivities:

On his first full day as president, Barack Obama arrived in the Oval Office at 8:35 a.m. Wednesday and managed to spend 10 minutes alone with a letter that was left in his desk, the White House announced.

In that now-rare solitary moment, Obama read a note left to him by the office's most recent occupant. "To: #44," the envelope was marked,"From: #43."

The contents remain private, but the note no doubt included wishes of good luck as Obama shook off the revelry of Tuesday's inauguration and began to tackle the issues most likely to define his first hundred days: the reeling economy and the wars in Iraq and Afghanistan.

While out-of-towners struggled to hail taxis for the airport and workers broke down party tents and crowd-control fences, the new president and first lady Michelle Obama attended the final official inaugural event Wednesday: a prayer service at the National Cathedral. The president later had meetings scheduled with his economic and military advisers, including Defense Secretary Robert Gates and Adm. Mike Mullen, the chairman of the Joint Chiefs of Staff.

Obama placed phone calls Wednesday to the heads of state in Egypt, Israel, Jordan and the Palestinian Authority "to communicate his commitment to active engagement in pursuit of Arab-Israeli peace from the beginning of his term, and to express his hope for their continued cooperation and leadership," White House spokesman Robert Gibbs said.

During a televised meeting with his senior staff, Obama signed his first executive orders that institute new ethics rules, including a ban on gifts to staff and add restrictions on the revolving door between the White House and lobbying shops.

Obama also announced he would freeze the pay of about 100 senior staffers who now earn more than $100,000, and he pledged to comply with not only the letter but the spirit of the Freedom of Information Act, which allows access to public records. He characterized the FOI Act as one of the most powerful instruments to hold government accountable.

"Transparency and the rule of law will be the touchstones of this presidency," Obama told staff who had gathered in a briefing room in the Old Executive Office Building. He said that the new rules represent a "major break with business as usual."

"However long we are keepers of the public trust, we should never forget we are public servants," Obama said, cautioning staffers that they should not use their positions to seek favor for themselves, friends or corporate interests. His orders will prevent staffers who were lobbyists from working on matters or with agencies related to that lobbying, and he said that any staffer who leaves would not be allowed to lobby the Obama administration.

The president already has ordered a 120-day stop to pending war crimes trials at the U.S. naval station at Guantanamo Bay, Cuba, to allow him time to review how terror suspects should be handled. He is said to be considering reversing by Thursday some of former President Bush's executive orders.

And on Capitol Hill, the man Obama picked to help lead the nation out of its financial morass faced tough questions from some Republicans on the Senate Finance Committee about his failure to pay more than $34,000 in Social Security and Medicare taxes when he served as a top official at the International Monetary Fund from 2001 to 2003.

Treasury Secretary-designee Timothy Geithner, now president of the New York Federal Reserve, told senators considering his nomination that he "should have been more careful." But he forcefully made his case for rapid action on a stimulus bill, or face risk of further economic damage.

Meanwhile, the House is planning to vote on setting conditions on the president's use of the just-released final $350 billion of the financial industry bailout money, and a Senate committee resumed its work on his economic stimulus package.

Obama is expected to preside over a swearing-in ceremony for seven Cabinet members confirmed Tuesday by the Senate. His pick for secretary of state, his former rival Sen. Hillary Clinton, is expected to get Senate confirmation later Wednesday.

A full plate, no doubt, with other troubling issues lurking, including the tenuous situation in Gaza.

In the opening prayer at Wednesday's national prayer service, the Rev. Otis Moss, senior pastor emeritus at Olivet Institutional Baptist Church in Cleveland, invoked the quick passage of time and the need for action.

"Keep us aware of the fact that this is a fleeting moment," he said. "Help us to use it in such a way that we leave what we touch better than we found it."

Though he has four years stretching before him, Obama has no time to waste.