Accessibility links
Doctors Question Rise in Skin Cancer Biopsies Melanoma, the deadliest form of skin cancer, is diagnosed at more than twice the rate it was just 20 years ago. But some doctors worry this isn't a signal of melanoma epidemic. Instead, it could be an epidemic of skin biopsies. 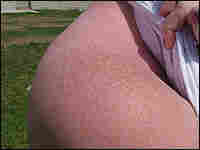 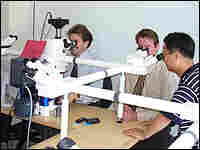 Melanoma, the deadliest form of skin cancer, is diagnosed at more than twice the rate it was just 20 years ago. But some doctors worry this isn't a signal of melanoma epidemic. Instead, it could be an epidemic of skin biopsies.

Chrys Uicker, 38, is one tragic example. Uicker remembers exactly what she was doing five years ago when her dermatologist called her with the results of a biopsy taken from a mole she thought had changed.

"I was sitting in my home office," Uicker says. "He called and said he had some news for me, and I think he may have asked if I was able to talk, and my heart started skipping."

Uicker was not high risk for melanoma. She had no family history of the disease. She was not fair-skinned and had always protected herself from the sun with sunscreen.

"He said, 'The good news is that we've caught it very early. We will go back in for a deep, wide incision. The prognosis is good for a full recovery,' and so forth," Uicker says. "But all I could hear was that I have cancer."

After that day in July, the sun became the enemy for this former outdoorswoman who loved horseback riding, swimming and boating. Uicker stopped practically all of her outdoors activities. She covered herself head-to-toe in sunscreen and clothing. She became fearful of any ray of sun at all. And her life became a series of biopsies and surgeries.

"It seemed as though every time I went to see the oncologist he would look me over and find a funny looking freckle or mole. He would then refer me back to the dermatologist for another biopsy, which would then be sent to the lab," Uicker says.

Every time, the diagnosis would come back as some type of pre-cancer that, based on Uicker's initial diagnosis of melanoma, required surgery to remove the worrisome area with all its margins.

Over five years, Uicker had surgeries to remove parts of her calf, her back, her temple, her toe — all to stop or prevent melanoma. She and her husband wanted to have a second child but doctors recommended otherwise: The cancer might spread, or even metastasize to the fetus.

"Here I was 33 years old, and my life sort of froze. All my dreams of having a child and all the dreams I had built of having more than one child seemed suddenly impossible," she says. "Then on top of that was this fear that now I have this wonderful little girl ... and I'm probably going to die, and she's going to be alone."

So Uicker and her husband decided to take a chance and have another baby. Luckily, her pregnancy was fine and her baby was healthy. Then, what Uicker describes as her lottery ticket came along. It started with a routine visit to the oncologist, who sent her back to the dermatologist for another biopsy. But this time, the dermatologist seemed hesitant.

He asked Uicker how she would feel getting a second opinion on her case.

Two weeks later, Uicker got the second opinion. She never had melanoma. She couldn't believe it.

"In my mind, you're either pregnant or you're not pregnant. You either have cancer or you don't have cancer. How can you make such a big mistake?" she asks.

Uicker's biopsies were sent to the University of California, San Francisco to be examined by pathologists who specialize in skin disease. These dermatopathologists are able to use a special microscope that enables all of them to examine the same skin biopsy or specimen at the same time. These doctors read a lot of skin slides — more than 150,000 a year. And, because they are so specialized, they are able to make diagnoses other general pathologists are unable to make.

Dr. Philip LeBoit says about 10 percent of all skin biopsies are difficult to diagnose. In one study, pathologists completely disagreed on two-thirds of the difficult cases they examined.

"I think there's more disagreement about moles and melanoma than other types of cancers," LeBoit says. "The other cancer cells don't have as many tricks up their sleeve as the cells that cause moles and melanomas do."

One of those tricks: Benign cells can appear like melanoma, with dark inner nuclei. Another trick: The pattern of cells can be deceptive. On top of that, LeBoit says skin biopsies are often taken much sooner than with other cancers. This means the cancer is in earlier stages of growth and therefore more difficult to diagnose.

"You can have things detected at a stage when they are only a few millimeters across, whereas with breast cancer, for example, they're seldom detected before at least one centimeter and sometimes two centimeters across," LeBoit says.

That can mean doctors may be catching cancers earlier — and curing them.

But maybe not. In a recent study, epidemiologist Dr. Gilbert Welch of the Department of Veterans Affairs found that doctors performed 2.5 times more biopsies in 2001 than 14 years earlier.

And he found that the number of biopsies diagnosed as melanoma grew at about the same rate. But, there was no corresponding increase in biopsies showing later-stage melanoma, nor in deaths from melanoma. Welch says that suggests doctors are diagnosing melanoma when there's no cancer or when the cancer would never have become deadly.

"Whenever we look for cancers in people who have died from something else, we find small 'clinically insignificant' cancers. Cancers that people have lived with — they haven't died from them — and that reservoir of cancer is something we're just starting to tap now as we look harder and harder for cancer," Welch says.

For example, prostate cancer is often found in an autopsy, but it didn't cause the patient's death and might never even have been diagnosed. Doctors are finding similar cases among breast and lung cancers.

That's why Welch worries that yearly melanoma screening, without a reason for concern, might be leading to a lot of biopsies and turning a lot of healthy people into patients like Chrys Uicker.

"I can look back now and see that I suffered deep depression, lost myself," she says. "I had been a carefree person and I was turned into someone who was constantly terrified of dying."

What does all this mean for melanoma screening? It turns out that none of the leading cancer groups or government health officials recommend routine screening.

The American Academy of Dermatology only recommends an exam if you notice something changing, growing or bleeding on your skin. The American Cancer Society suggests periodic general health check-ups, but does not recommend annual skin checks for everybody.

Practicing dermatologists say high-risk individuals should be screened, but their opinions differ on when it should start and how often it should happen. High risk means a family history of melanoma; being fair-skinned with blue eyes or red hair; or people who were often in the sun or got a lot of sunburns, especially as children.

Florida dermatologist Dr. James Spencer says a lot of people are in that last category.

"I'll bet you anything that your grandmother did not lie out at a pool in a bikini with baby oil on, and there's a real good chance her granddaughter did in her teenage years," Spencer says.

The precautions are clear: Don't roast in the sun, use sunscreen, Wear a hat — and avoid tanning beds. Interestingly, Spencer says, cutting off moles you've always had is not protective. Moles should be examined — and possibly removed — when they've changed in shape, color or size.