Accessibility links
Brian Blade Finds Fellowship At Vanguard Brian Blade, a reed of a man, sits up straight at his drums, lifting a shoulder. Born in 1970 in Shreveport, La., his father has been the pastor of the Zion Baptist Church there for almost 50 years. The dedication that started in church has expanded in the Fellowship Band, which plays a second set from the Village Vanguard.

More From The Concert 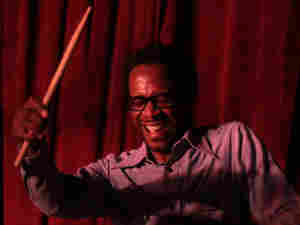 Late in the 1980s, Brian Blade left home in Shreveport for Loyola University in New Orleans. He studied with the city's legendary teachers and formed his own working trio. When Blade moved from New Orleans to New York, his bandmates — Jon Cowherd on piano and Chris Thomas on bass — relocated, as well. Adding a guitar and two saxophones, they became the Fellowship Band.

Word of mouth raised Blade's profile, at which point major artists, including Joni Mitchell and Bob Dylan, began to hire him. Wayne Shorter also scooped him up for the superb Wayne Shorter Quartet. His career on a strong upward trajectory, Blade keeps his feet on the pedals, his ears and heart open to the moment, and continues to lead the Fellowship Band.

The saxophonists are Myron Walden on alto and bass clarinet and Melvin Butler on tenor. The band calls Butler the lead singer because of his vocal quality on the horn. Guitarist Kurt Rosenwinkel lives in Berlin, Germany, but flies in for gigs. Bassist Chris Thomas attends cooking school in St. Louis, so Doug Weiss is subbing for him here at the Village Vanguard.

The Fellowship Band offers this set from the Village Vanguard in New York with no commentary. The instrumentalists tell the stories and listeners get inside them. One highlight is "Calling My Children Home," with Myron Walden on bass clarinet and Jon Cowherd on harmonium, an old-fashioned pump organ he calls a battlefield instrument. Blade adapted a vocal arrangement by Emmylou Harris of this gospel song by Doyle Lawson for the Fellowship Band.