Accessibility links
Mozart's 'Cosi fan tutte' Mozart's masterpiece Cosi fan tutte is billed as a comedy, but it often leaves romantically inclined listeners feeling just a little bit queasy. It comes to us from the Salzburg Festival, in a production featuring the Vienna Philharmonic.

An Introduction to Mozart's 'Cosi'

From the Salzburg Festival

An Introduction to Mozart's 'Cosi' 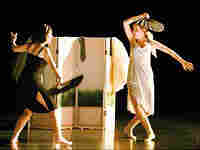 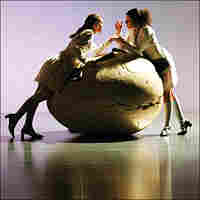 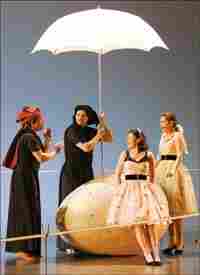 BACKGROUND: Cosi fan tutte was the last of the three masterful collaborations between Mozart and librettist Lorenzo da Ponte — the other two were The Marriage of Figaro and Don Giovanni. They were composed between 1785 and 1790, and they are all great operas. But of the three, it's Cosi that has drawn a bit of criticism over the years. The libretto is sometimes dark and ambiguous, and the musical style can seem inconsistent.

But for this story, the ambiguity and inconsistency are appropriate. How many times have you felt something so deeply that you simply couldn't put it into words? That's what happens to the characters in this opera. They wind up dumbfounded by their own emotions. But when their words are inadequate to express their feelings, it doesn't matter — Mozart's music does it for them.

Act 1: The action begins in a cafe. Two young officers, Ferrando and Guglielmo, are bragging about the unswerving fidelity of their fiancees, the sisters Dorabella and Fiordiligi. Don Alfonso, an older friend of theirs, says that no women are ever truly, faithful. He also says he can prove it. Alfonso bets the two young men a hundred gold pieces that if they do everything he says, their lovers will betray them. Ferrando and Guglielmo eagerly accept the wager. But their music is so stiff and ceremonial that we already wonder how confident they really are.

According to Alfonso's scheme, the two men will pretend they've been called away to war. While the women are mourning their absence, the men will return in disguise and do their best to seduce each other's girlfriends. If they succeed, Alfonso wins the bet.

Fiordiligi and Dorabella are heartbroken when they find their lovers are leaving with the army. Despina, a servant, suggests that while the men are gone the sisters should entertain themselves — with new men. Their reaction is shock and indignation but, again, the underlying tone of the music hints that the women might just be interested in some extra-curricular hanky-panky.

Alfonso takes Despina aside and bribes her to help with his plan. He tells her that two wealthy Albanians are in town, and are eager to meet her mistresses. The Albanians are actually Ferrando and Guglielmo, in outlandish disguises. Alfonso brings the men in, and hides. Despina agrees to introduce them to Dorabella and Fiordiligi. When the brazen Albanians make their moves, the two women are offended and leave. The soldiers say they have won their bet. But Alfonso tells them it's not over yet.

Alfonso and Despina hatch the next part of their scheme. The women are in their garden, again pining for their absent lovers. The Albanians suddenly appear. They say they can't bear any further rejection, and both pretend to swallow arsenic.

Despina goes with Alfonso to find a doctor. Then, as the women timidly approach the "dying" men, Alfonso returns, bringing Despina disguised as a doctor. Using a dubious, magnetic medical device, she revives the Albanians. Fiordiligi and Dorabella had expressed sympathy for their suicidal suitors. But when the men immediately resume their pleas for love, they're rejected again.

Act 2: Fiordiligi and Dorabella are increasingly confused and conflicted over the attentions of the lovesick Albanians. Despina tells them to stop being silly. She says that any woman over the age of 15 should take advantage of this kind of situation. After all, she proclaims, a woman can survive without love — but not without lovers.

The sisters act scandalized by her suggestions, but they're beginning to think Despina's approach might have certain advantages. Dorabella persuades Fiordiligi that it might be fun to lead these guys on. She decides she'll take the dark one — Guglielmo — leaving Fiordiligi with Ferrando. Unwittingly, the sisters have just agreed to switch lovers.

Despina and Alfonso bring the two couples together, and leave them alone. Both men turn on the charm, and one of them succeeds. Guglielmo persuades Dorabella to accept a gift, a small golden heart. She puts it in her locket — replacing her picture of Ferrando.

The two men get back together to compare notes, and things start to go sour. Ferrando has had no luck with Fiordiligi, and he assumes Guglielmo has also struck out with Dorabella. Guglielmo first hedges a bit, but when he produces the picture Dorabella removed from her locket, Ferrando is heartbroken. Disguising his pain as anger, Ferrando resolves to have another go with Fiordiligi.

Meanwhile, the sisters also compare notes. Dorabella has adopted Despina's carefree attitude, and is ready to marry her new lover. But it's the faithful Fiordiligi who feels most guilty. She rejected her Albanian, but she really did want the guy and now wishes she had acted on her passion. As a penance for her licentious feelings, she decides that she and Dorabella should dress as soldiers and head for the battlefield to be with their true loves.

But Ferrando reappears, still in disguise, and Fiordiligi can't resist him any longer. She gives in while Guglielmo is watching. Now it's his turn for anguish.

Alfonso says the two men might just as well marry the women. They were bound to be unfaithful eventually, so why not make the best of it? Despina makes their decision even easier when she announces that the women are proposing a double wedding.

The couples uneasily drink to their future happiness — with the two men quietly seething. The versatile Despina again turns up in disguise, this time as a notary. She produces a marriage contract, and the women sign it. Before the men can do the same, Alfonso suddenly announces that the sisters' former boyfriends have returned from battle. Frantically, Dorabella and Fiordiligi send the Albanians into another room.

The men take the back way out, then return through the front door without their disguises. They feign outrage when they discover that their supposedly faithful fiancees have signed a marriage contract. Alfonso points to the room where the women have hidden the Albanians. The men go in with swords drawn, and then return carrying the disguises. The women finally realize they've been tricked.

Alfonso tells the two couples that it's all for the best — everyone is wiser now. They've seen each other as they really are, and can all have a good laugh at their own expense. There's forgiveness all around, and the couples are reunited. Still, the atmosphere is uneasy. It's hard not to wonder about the future, and if the mistrust and betrayal — on both sides — can ever really be forgotten.