Accessibility links
Freedom Of Information Isn't Just For Journalists As part of his promise to increase transparency in government, President Obama instructed federal agencies Wednesday to be more responsive to Freedom of Information requests. Tom Blanton, director of the National Security Archive, says the law affects Americans in all walks of life in real, tangible ways. 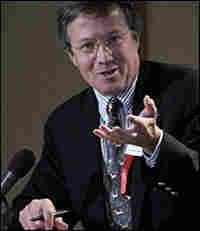 Wednesday, in his first set of presidential orders, President Obama instructed federal agencies to be more responsive to Freedom of Information requests. It's part of his promise to increase transparency in government.

Every military veteran, every senior citizen, every private business ought to be cheering the president on because those are the folks who really use the Freedom of Information Act.

I know what you're thinking — the Freedom of Information Act, that's just for journalists, isn't it?

No. Reporters and researchers like me file only a small percentage of the information requests to the federal government.

The largest single group of people who use the law to get information are senior citizens, who made millions of requests last year, asking for copies of their earnings record, or information on their benefits package, or about that Medicare prescription drug program.

Military veterans and their families are next, with upwards of 2 million requests, mainly about their health coverage, disability benefits and service records.

And commercial businesses file about two-thirds of the rest of the Freedom of Information requests. These companies wanted to know about government contracts they could bid on, or regulations that were coming down the pike, or what their competitors were up to.

Journalists and research groups like mine? Well, we made up only about 5 percent of the total. Our requests did make front page news — for information on Iraq war plans that just assumed everything would be secure afterward or the inspection data at a Minnesota turkey processor that showed salmonella in more than half the samples. So you definitely want folks like me to stay on the case.

But the real glory of the Freedom of Information law is how it gives ordinary people, all of us, ownership over the information.

As the head of the largest store of government secrets, I can say that the last eight years were extremely difficult. There were record-setting numbers of secrets and a lot of bad decisions hiding under that shroud of executive privilege and information control.

So Wednesday's announcement at the White House was good news. President Obama told the nation, "every agency and department should know that this administration stands on the side not of those who seek to withhold information, but those who seek to make it known."

That's every senior citizen, veteran and commercial business, and journalists, too. Let's make it known.

Tom Blanton is the director of the National Security Archive.