Accessibility links
Obama Likely To Allow Aid For Abortion Counseling The president is expected to issue an executive order revoking a policy that bars international family-planning organizations that offer abortion services or referrals from receiving U.S. aid. The policy was originally issued by President Reagan and then reversed by President Clinton, before being instituted again by President Bush.

The president is expected to issue an executive order revoking a policy that bars international family-planning organizations that offer abortion services or referrals from receiving U.S. aid. The policy was originally issued by President Reagan and then reversed by President Clinton, before being instituted again by President Bush.

President Obama is expected to issue an executive order soon that will rescind restrictions on international family planning groups. It bars organizations from receiving U.S. aid if they perform or promote abortions. It's known as the global gag rule. The policy has been changed every time a different party has taken the White House since 1984. That's when President Ronald Reagan first announced the policy at a conference in Mexico City. Here's NPR's Brenda Wilson.

BRENDA WILSON: Under the Mexico City policy, U.S. groups didn't lose the right to make the case for access to abortions because it would have violated rights to free speech. But it's called the global gag rule because foreign groups that associate with those who do abortions, abortion counseling, or advocacy could lose U.S. aid. Susan Cohen is the director of the advocacy group the Alan Guttmacher Institute.

Ms. SUSAN COHEN (Director, Alan Guttmacher Institute): It says that if you want our family planning aid, you can't even use your own money to provide abortion services, or money you get from the British government or the Swedish government. And beyond that, it says you can't use your own money to counsel pregnant women who come in looking for safe abortion services. You can't refer these women.

WILSON: For eight years, she says, organizations have been forced to choose between abortion services or family planning, even in countries like Ghana where abortion is legal.

Ms. COHEN: They've had to close down entire parts of their family planning programs, especially the programs that were focused on outreach into the rural areas providing contraceptives to women who had no other source of obtaining those methods. They lost the U.S. government family planning assistance, and they were not able to find any replacement funds.

WILSON: Without the gag rule, organizations can apply to have family planning funds restored, even if they make abortion referrals. Tom McClusky of the Family Research Council says it means President Obama has gone back on his word to find common ground and ways to reduce abortions.

Mr. TOM McCLUSKY (Family Research Council): By reversing the Mexico City policy, we're saying that the policy of the United States for family planning includes abortion or killing the child.

WILSON: Changing the rule, however, does not mean that U.S. funds can be used to perform abortions. But McClusky doubts the government can keep track of how funding will be used.

WILSON: One clinic affected by the gag rule is in Debre Berhan, a little college town that I visited in Ethiopia a couple of years ago. Abera Alemne(ph), the coordinator of the Marie Stopes Family Planning Center, says several women show up every month seeking an abortion.

Mr. ABERA ALEMNE (Coordinator, Marie Stopes Family Planning Center): We never encourage anyone to have abortion. But unwilling or willing, they can't.

WILSON: Because they're afraid of being found out, the women - schoolgirls really, he says - often take matters into their own hand. Up to 80,000 women around the world die from the complications of unsafe abortions. Berhan refers them to a local hospital.

Mr. ALEMNE: It's very sad. It's very bad to hear this. They keep on crying, help us. But because of the restrictive law, we can't answer all they need.

WILSON: For doing abortion referrals alone, family planning centers like this have been off-limits to groups that get U.S. funds. Lifting the global gag rule will change that. Brenda Wilson, NPR News. 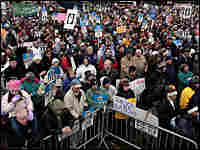 Thousands of anti-abortion demonstrators gathered during the March for Life in Washington, D.C., on the 33rd anniversary of Roe v. Wade in 2006. Chip Somodevilla/Getty Images hide caption 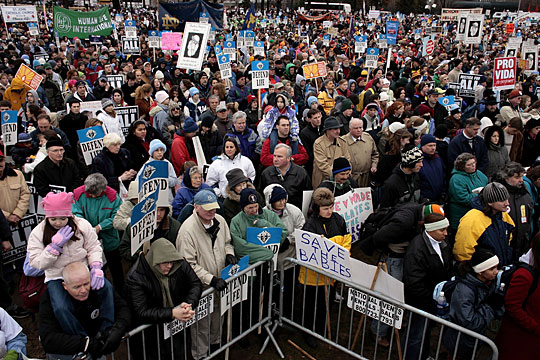 Thousands of anti-abortion demonstrators gathered during the March for Life in Washington, D.C., on the 33rd anniversary of Roe v. Wade in 2006.

Thursday marks the 36th anniversary of Roe v. Wade, the landmark Supreme Court decision that legalized abortion nationwide. It's also likely to mark the day President Barack Obama will reverse at least a few of the anti-abortion policies of George W. Bush.

By now, it's become something of a tradition.

The most likely candidate for action is the so-called "Mexico City policy," known by its detractors as the "global gag rule." It prohibits U.S. foreign aid assistance to international family planning groups that "perform or promote" abortion.

Abortion-rights supporters say the change would be more than symbolic.

"It would be huge," says Rep. Diana DeGette (D-CO), co-chair of the Congressional Pro-Choice Caucus. "By the U.S. restricting women's rights to reproductive planning internationally, it really destroys their lives. Because they can't control the size of their family, that affects their use of resources and food and child nutrition and so many other things. The way to increase the stability in Third World countries, frankly, is for sensible family planning."

But Richard Doerflinger of the U.S. Conference of Catholic Bishops says the Mexico City policy hasn't reduced U.S. aid for family planning by a single dime — it has simply redirected it to groups that forswear abortion-related activities.

"You can't reduce abortions by promoting abortions," Doerflinger says. "Let's keep it centered on family planning. And an organization that takes the money to do family planning in developing nations will agree not to perform and promote abortion as a family-planning method — and the vast majority of organizations have been able to sign that pledge."

One that has not is the largest international family-planning group, the International Planned Parenthood Federation. Cecile Richards, president of Planned Parenthood Federation of America, says she's hopeful early action by President Obama on the Mexico City policy — and possibly restoration of funding for the United Nations Population Fund, which has been blocked by disagreements over its activities in China — will signal a new direction.

"I think people are looking for solutions," says Nancy Keenan of NARAL. "I think most people agree that you have to make birth control available, that you should invest in family planning."

Doerflinger of the Catholic Bishops Conference says birth control can get divisive if it forces Catholic institutions to provide artificial contraceptives. But he agrees that there is some common ground in the debate.

"I think most Americans do not like abortion. They would like to see fewer abortions," he says. "And one thing I would hope we could agree on is that if a woman does find herself pregnant, that we can help make sure that she is not pushed toward abortion by the fact that no one said we're supporting another way."