Accessibility links
Selling Americans On The Virtuous Recession A large credit union in Seattle has started an ad campaign that stresses its nonprofit bona fides. Sprint advertises calling plans that are right "for these times." Does austerity sell? Or is that a ridiculous contradiction?

A large credit union in Seattle has started an ad campaign that stresses its nonprofit bona fides. Sprint advertises calling plans that are right "for these times." Does austerity sell? Or is that a ridiculous contradiction?

With layoffs, foreclosures, and scary financial statements arriving in the mail, there's a lot of economic doom and gloom out there. But have you heard anyone recently say something like this?

Mr. STEVE ST. ANGELO (President, Toyota Motor Manufacturing Kentucky, Inc.): I hope no one gets hurt from this, but I believe once this is all over I think we're going to be a better nation as a result of this.

NORRIS: That's Steve St. Angelo, a top executive with Toyota. Our reporter Martin Kaste interviewed him recently at a Toyota plant in Kentucky. It struck Martin as a gutsy thing to say, but then he started noticing the same sentiment cropping up in advertising. As Martin soon found out, there's a growing effort to sell Americans on the notion of the virtuous recession.

MARTIN KASTE: Some ads just hint at it. Take this one for a $99-a-month cell phone plan.

Mr. DAN HESSE: It's no surprise that people are trying to be smarter with their money these days. I'm Dan Hesse, CEO of Sprint, and we have a plan for you.

KASTE: Here, Sprint is just trying to flatter our new-found love of thrift. But Allstate takes things further. The pitch man in one of its ads tells us that Allstate was founded during the Great Depression.

Mr. DENNIS HAYSBERT (Actor): And through the 12 recessions since, they've noticed that after the fears subside, a funny thing happens. People start enjoying the small things in life.

KASTE: School children gaze at a gallery of Depression-era photos, absorbing the lesson of dignified deprivation.

Mr. HAYSBERT: It's back to basics, and the basics are good. Protect them. Put them in good hands.

KASTE: It almost makes you proud to be part of an economic downturn, but it doesn't work on everybody.

Mr. IAN BAKER(ph): I hope it backfires on all of them.

KASTE: Ian Baker is strolling through downtown Seattle with his young daughter. He hasn't lost his job, but he knows plenty of people who are nervous.

Mr. BAKER: There's nothing to romanticize about the Depression. I mean, economic meltdown isn't a positive, no matter how you look at it.

KASTE: It doesn't help that Baker is standing in the shadow of the Washington Mutual Tower. It's one of the places where this crisis started and where thousands are now losing their jobs. But even some of them buy the idea that the meltdown might be good for us. Laura Bateson(ph) is taking a smoke break outside her soon-to-be former place of employment.

Ms. LAURA BATESON (Employee, Washington Mutual): If it lets people take more serious actions with money and their financial responsibility and corporations and their ethics and their standards, then I'm all for it.

KASTE: And that's the feeling that businesses are now trying to harness. Market researcher Lia Knight(ph) says she has several clients who are considering what she calls "transparent messages" - simply put, ads that acknowledge hard times.

Ms. LIA KNIGHT (Market Researcher): What their trying to do is seek the good in what is usually termed with negative terms like "crisis" or "economic downfall."

KASTE: But what the companies don't know yet, she says, and what one client has hired her to find out, is whether Americans are really serious about embracing the thrifty values of the Great Depression. Twenty stories above the streets of downtown Seattle in an office resembling the Genius Bar at an Apple store, ad man Dan Gross predicts a change in tone.

KASTE: Instead, we'll be treated to pitches that are more what he calls "grounded." To illustrate, he opens his Mac and cues up a new ad for a credit union.

Unidentified Announcer: We are a half-million credit union members who are looking out for each other, instead of Wall Street. And we are turning the financial world right side up.

Mr. GROSS: "Turning the financial world right side up." That means something now. I don't think a year ago that would have made quite as much sense, because culturally we all know what that means now.

KASTE: Yes, we do. Or at least we think we do. Right side up, back to basics, as always advertisers are inviting us to project our hopes onto whatever it is they are selling. And right now we're hoping we'll somehow get through all this and be better off for it. Martin Kaste, NPR News, Seattle.

The Secret To Selling When Nobody's Buying 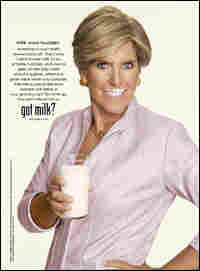 The dairy industry hired personal finance guru Suze Orman to champion milk as a bargain. It's just one example of "recession marketing" — urging people to buy merchandise that saves them money. Courtesy of www.whymilk.com hide caption 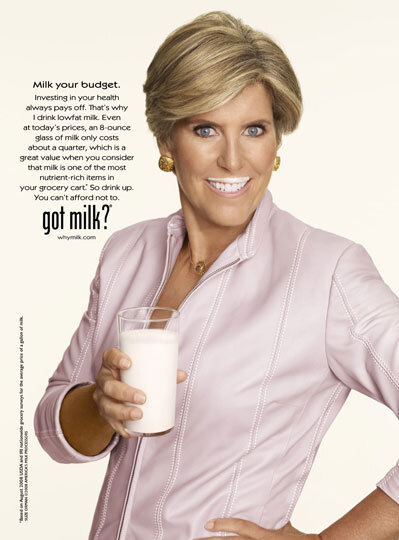 The dairy industry hired personal finance guru Suze Orman to champion milk as a bargain. It's just one example of "recession marketing" — urging people to buy merchandise that saves them money.

Flip on the TV, click through the Internet and you'll see advertisers struggling with a dilemma: How do you sell stuff to people when nobody's buying?

The answer, according to the ad-world gurus, is "recession marketing." It's a way of raising money from lower expectations. Turning the bad times into glad times; dearth into mirth.

The messages are clear: Stay home and cook dinner instead of spending money at a restaurant. Do your own house cleaning, gardening and home repair. Buy more merchandise to save more money.

"Consumer marketers are focusing their most recent ad campaigns not just on the bargains they're able to offer, but also on the economic value they can deliver at a time when the country is acutely aware of what it's spending and where," writes Tessa Wegert on the ClickZ Web site for digital marketers. "Ads that take a decidedly cash-conscious spin are cropping up on television, in print, and of course, online."

Mary Beth West, head marketing honcho at Kraft Foods, explained recession marketing in a 2008 speech delivered to a bunch of advertising professionals just as the economic downturn was beginning to set in. The recession, she said, presents companies with a "marketing opportunity." And she encouraged salespeople to "reframe or redefine your value proposition to that consumer target."

In other words, she said, "How do you think about redefining what your brand stands for in a world of tight economy?"

For example, she said, Kraft planned to encourage dine-at-home experiences because fewer people dine out during a recession. And the company launched a campaign informing consumers that Kool-Aid is a really sweet deal: one-third the cost of soda.

Allstate insurance is meeting hard times head on. In one TV spot, featuring the reassuring actor Dennis Haysbert (perhaps best known as President David Palmer on the Fox drama 24), the company reminds viewers that it got its start in 1931, during the Great Depression. "And through the 12 recessions since," Haysbert says, Allstate has noticed that "after the fears subside, a funny thing happens: People start enjoying the small things in life. It's back to basics, and the basics are good." Home and auto insurance, apparently, are among the basics.

Hyundai, the Korean auto manufacturer, is running an ad in which the voiceover intones: "Buy any new Hyundai and if in the next year you lose your income, we'll let you return it." Because, the ad continues, "We're all in this together. And we'll all get through it together."

Other companies have joined the recession procession. Fitness centers, cruise lines, hotels, office supply firms all offer discounts pegged to the wheezing economy. The dairy industry hired personal finance adviser Suze Orman to champion milk as a bargain. Kellogg's crows in an ad that its corn flakes cost "less than 50 cents a bowl." Wal-Mart combines two New Year notions and offers discount exercise machines that will "trim your body and your budget."

The First Thing To Go

A recession, says Mike Beltrame of Beltrame Leffler Advertising in Indianapolis, "is always a good time to cut the waste out of marketing budgets." An economic slowdown "forces a company to evaluate the most efficient target audiences and the most effective marketing tools."

"Keys to staying strong during and after recessionary periods," Beltrame says, "include maintaining brand awareness levels and maintaining brand image." That is, the one thing companies can't afford is to cut their marketing budgets so drastically that they risk diminishing the strength and visibility of their brand.

A consumer's ability to easily recall a brand's name has a direct correlation to sales, Beltrame says. "It is risky to cut marketing budgets to the point of losing name recognition and awareness, allowing other companies to gain strength and market share coming out of a recession."

Ad critic Bob Garfield of Advertising Age says, "It is a truism — and it's probably true — that if you spend into a recession, you will gain market share cheaply. However, in all of human history, no one has ever done so. Advertising and marketing expenditures are always the first thing to go."

Even so, recession-themed marketing has become so popular, writes Tessa Wegert, it is "poised to supplant green-themed campaigns."

After all, with lower gas prices and higher market fears, more and more consumers may see environmental consciousness as just one more luxury they can no longer afford.

We described Laura Bateson as "taking a smoke break outside her soon-to-be former place of employment." She is not a smoker.