Accessibility links
A Captive in Control: 'L'italiana in Algeri' The plot is more than a little silly — not to mention politically incorrect in the extreme — but wackiness was never done better, or more beautifully, than Rossini did it in The Italian Girl in Algiers, heard in a Washington National Opera production filled with world-class, Rossini singers.

A Captive in Control: 'L'italiana in Algeri'

A Captive in Control: 'L'italiana in Algeri'

Toward the end of the opera, Isabella revs up her fellow, Italian captives with the aria "Pensa alla patria" — "Think of the fatherland." This recording is by mezzo-soprano Cecilia Bartoli.

'Languir per una bella' from 'L'italiana in Algeri'

In the aria "Languir per una bella" — "Longing for a beautiful woman" — Lindoro considers his sorry fate. He's locked away by Mustafa, and far from his lover, Isabella. The recording is by tenor Juan Diego Florez, who is also featured in the Washington National Opera's production.

'Languir per una bella' from 'L'italiana in Algeri' 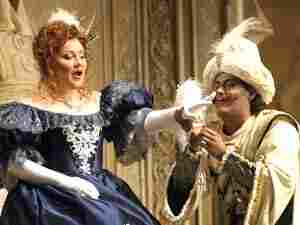 Both Gioachino Rossini and Ludwig van Beethoven were dominant composers during the early 1800s. Aside from that they have very little in common, especially when it comes to opera.

Sometime before 1809, Rossini began composing his very first opera, beginning a career that produced everything from deadly serious tragedies, to historical epics to frothy comedies. By the time he was done, Rossini had written nearly 40 operas, and was famous in theaters all over Europe.

In 1804 Beethoven got started on his own first opera, launching an operatic career that concluded about 10 years later — when he finally finished that same opera. It was the only one he ever composed.

Still, these two, very different opera composers do share one common thread. They both took a dramatic formula that was extremely popular among opera lovers early in the 19th century — something called the "rescue opera" — and turned it upside down. Beethoven did it in his only opera, Fidelio, and Rossini followed suit in the opera featured here, his 1813 comedy L'italiana in Algeri.

A typical rescue opera involves a beautiful young woman who is kidnapped or captured, and faces torture and death until her heroic lover shows up and saves the day. But in Fidelio and L'italiana, the tables are turned: In both operas it's a man who's in desperate trouble, and it takes a resourceful woman to get him out of it.

L'italiana in Algeri is usually translated as The Italian Girl in Algiers. But if Isabella, Rossini's title character, were transported into today's world, nobody would dare call her a "girl." She's one of the wisest and most formidable women you'll find in any opera, and by the time her story ends, no one — including her captive lover Lindoro — is willing to stand in her way.

The Story of 'L'italiana in Algeri' 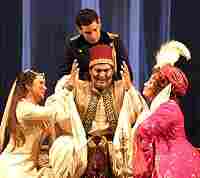 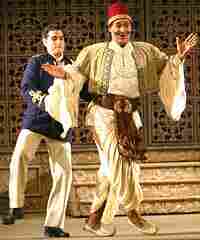 ACT ONE opens in Algiers, at a seaside palace ruled by Mustafa. Elvira, Mustafa's wife, complains to her servants that her husband no longer loves her. Then Mustafa himself bursts in and abruptly sends Elvira away, saying he's tired of his wife and will give her to Lindoro, a young Italian man whom Mustafa is holding as a slave.

Mustafa also decides that, in Elvira's place, he'd like to have an Italian woman. He enlists Haly, a captain in his service, to round up some local pirates and head out to find him one. He wants someone more interesting than the girls in his harem, he says, all of whom bore him.

Meanwhile, Lindoro is pining for his lover Isabella, who disappeared he when pirates captured him and delivered him to Mustafa's palace. Mustafa tells Lindoro he doesn't need this Isabella — he can have Elvira instead. Elvira, says Mustafa, possesses every virtue Lindoro could ever want.

In the next scene, there's a shipwreck offshore, and one of the survivors is Isabella herself. Arriving on shore, she sings the aria "Cruda sorte," lamenting the fate that has interrupted her quest for Lindoro. Quickly, pirates seize Taddeo, an aging admirer of Isabella's, and try to sell him into slavery. But he claims he's Isabella's uncle and can't leave her. When the pirates learn that both captives are Italian, they rejoice in having found the new star for their Mustafa's harem — Isabella. While Isabella knows she's in danger, she's confident that she can deal with just about any man who tries to cross her. They grab both Italians, and head for the palace. Taddeo is aghast at how calmly Isabella accepts their predicament, but after a quarrel about his jealousy they decide it's best to work together.

At the palace, Mustafa has ordered Lindoro and Elvira to marry, and the servant Zulma tells the couple they should give in and make the best of it. Mustafa promises Lindoro he can return to Italy — providing that he takes Elvira with him. Seeing no other way, Lindoro accepts the deal. But Elvira still loves her husband and sees no advantage in helping Lindoro. Haly then announces the capture of an Italian woman, and a gloating Mustafa leaves to meet her.

In the main hall of the palace, hailed by eunuchs as "the scourge of women," Mustafa welcomes Isabella. As an aside, she remarks that he looks ridiculous and she'll surely be able to put him in his place. Mustafa, on the other hand, finds the newcomer enchanting.

As Isabella seemingly throws herself on Mustafa's mercy, the jealous Taddeo starts to make a scene and is saved only when she declares that he is her "uncle." Elvira and Lindoro, who are about to leave for Italy, then come to say good-bye to Mustafa. Lindoro and Isabella are stunned when they recognize each other, but say nothing. To prevent Lindoro's departure, Isabella insists that Mustafa cannot banish his own wife, and that Lindoro must stay on as Isabella's personal servant. Mustafa grows increasingly frustrated, Lindoro and Isabella are happy but anxious, and everyone's head is spinning in the act's riotous finale.

As ACT TWO opens, Elvira and her courtiers are talking about how easily Isabella has dominated Mustafa, giving Elvira hope that she might just regain her husband's affections after all. Mustafa enters, announces that he's going to visit Isabella to share some coffee, and quickly goes off again.

Isabella emerges from her room. She's genuinely upset, thinking that Lindoro really is headed back to Italy with Elvira. Lindoro appears and sets her mind at ease. After he leaves, Mustafa reappears, accompanied by Taddeo as his bodyguard, dressed in Turkish clothes.

In the next scene, Isabella puts on Turkish clothing herself and waits for Mustafa's visit. She tells Elvira that to keep her husband, she must be more assertive. Elvira should watch, says Isabella, and learn.

Aware that Mustafa is eavesdropping, Isabella sings the aria "Per lui che adoro" — "For him that I adore" — asking Venus's help in winning the man she loves. To increase Mustafa's impatience, she keeps him waiting. And when she finally she presents herself to Mustafa, Isabella also invites Elvira to stay for coffee, much to Mustafa's annoyance. When Isabella insists that Mustafa treat his wife more tenderly, he erupts in anger.

Elsewhere in the palace, Haly predicts that his master is no match for an Italian woman. As Lindoro and Taddeo plan their escape, Taddeo claims that he is Isabella's true love. Lindoro is amused, and wants to put Taddeo in his place. Instead, Lindoro pretends to agree, knowing that he still needs Taddeo's help with Mustafa, who soon appears, still furious.

Lindoro says that Isabella actually cares very much for Mustafa and wants him to prove his worthiness by entering the sacred, Italian order of Pappataci. Believing this to be an honor, Mustafa asks what he has to do. Simple, says Lindoro: You must eat, drink, and sleep all you like, and remain oblivious to anything around you.

In her apartment, Isabella gets ready for the ceremony granting Mustafa his Pappataci status. Mustafa arrives, and Lindoro reminds him of the initiation procedure. After he's pronounced a Pappataci, he is tested by Isabella and Lindoro, who pretend to make love. Taddeo tells Mustafa he must ignore them — it's all part of the initiation. A true Pappataci is never concerned with the actions of his inferiors.

With Mustafa distracted, a ship draws up in the background. The lovers prepare to embark, together with some other Italian captives, and Isabella encourages them with the aria "Pensa alla patria" — "Think of the fatherland." But Taddeo realizes that he's also being tricked — that Lindoro and Isabel intend to stay together. He tries to rally Mustafa, who remains determined, as a Pappataci, to pridefully ignore all matters that might upset him.

By the time Mustafa finally breaks down and responds, the Italians have the situation well under control and bid the palace farewell. Mustafa has learned his lesson. He takes Elvira back, and everyone sings the praises of Isabella, the resourceful woman from Italy.