Accessibility links
New Parts of Alcatraz Revealed to Public Each year, nearly 1.5 million visitors take a ferry to Alcatraz from San Francisco and tour its chilly cell blocks. The federal prison that closed in 1963 has gotten an overhaul and a new audio tour, thanks to the efforts of a private group. 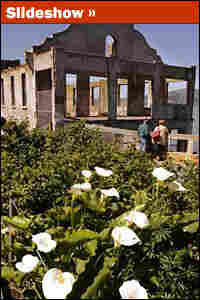 See Alcatraz, Then and Now

Arriving at the Prison

Alcatraz Island, the windswept mass in the middle of the San Francisco Bay, is most famous for its legendary federal prison known as "The Rock."

The Rock was designed to be America's answer to the gangsters who emerged during the eras of Prohibition and the Great Depression. Some of the country's worst criminals served time at Alcatraz, with little hope of escape.

The prison closed in 1963 and is now one of the top tourist attractions in the West. Each year, almost 1.5 million visitors take the 12-minute ferry ride from San Francisco, walking the same cold cell blocks inhabited by inmates such as Al Capone and George "Machine Gun" Kelly.

Officially, Alcatraz is a national park. The nonprofit Golden Gate National Parks Conservancy has renovated the site and opened new areas to the public for the first time. Additionally, a newly enhanced and digitized audio tour features narration from former guards and inmates at Alcatraz.

After raising $3.5 million, the conservancy worked with the National Park Service to create exhibits, open a new bookstore and restore neglected areas. One of the newly revealed sections is the shower room, where prisoners were first introduced to life on The Rock.

"They were stripped, searched, showered and given a number. And for the whole time they were on Alcatraz, they didn't have a name anymore, they just had a number. That's what life on Alcatraz was about," says Katy Olds, assistant director for visitor programs at the conservancy.

"There was an old metal shelving unit from the prison days that had never been moved or touched in the 44 years since the prison closed," Olds says. "A few months ago, we moved that shelving unit to get it out and clean it, and out dropped a foot-long shiv that had been hidden there by an inmate.

"The history is still here; it's still coming out every day."