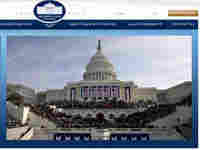 The "new" WhiteHouse.gov site promises a blog, slide shows and weekly video addresses, among other things. But, it has been slow out of the blocks. hide caption 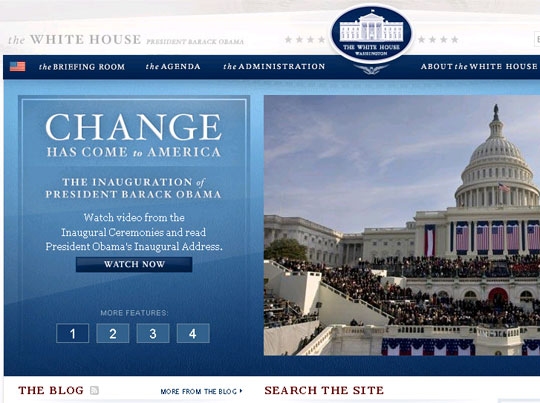 The "new" WhiteHouse.gov site promises a blog, slide shows and weekly video addresses, among other things. But, it has been slow out of the blocks. 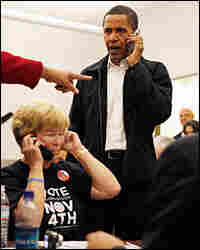 The new president is famously plugged in with his omnipresent BlackBerry. He's shown at a campaign office in Charlotte, N.C., on Nov. 3, 2008. Joe Raedle/Getty Images hide caption 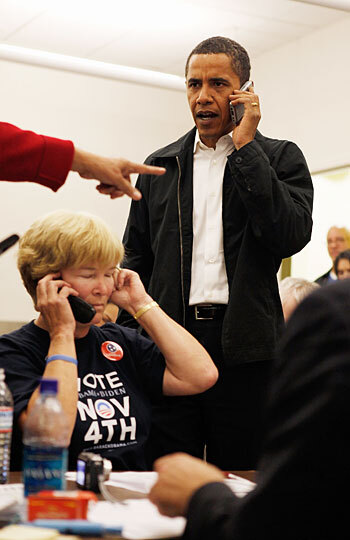 The new president is famously plugged in with his omnipresent BlackBerry. He's shown at a campaign office in Charlotte, N.C., on Nov. 3, 2008.

Crafted in the image of President Obama's campaign site, the new blue official White House site promises a blog, slide shows, weekly video addresses and other up-to-the-moment information on the president. The home page of www.whitehouse.gov features a rotating billboard of images.

But at a glance on the first days of its new incarnation, the Web site seems to be feeling like the rest of the country. Slightly hung over from all of the hype and hope and hoopla of the past few Obamatic months. Slow to get its dot-gov brain in gear.

"I think there is a lot of opportunity here," says Alissa Cooper of the Center for Democracy and Technology, a nonprofit public interest group that opposes unnecessary government restrictions on the Internet. "The Obama campaign made effective use of technology, including social networking, and aggressive use of e-mail lists."

As a result, people in the tech policy world have high hopes for the new administration's grasp of new ways of doing business.

The snag, Cooper says, is that "we have had, in many cases, federal policies in place for many, many years, going all the way back to the early 2000s. The Web was a different place then. Technology was different."

In other words, Cooper says, the White House may have good intentions when it comes to protecting the privacy of individuals who use the Web site, but she has concerns about the tracking of users because a third-party company provides analytics and video to the site.

Cooper is concerned about a collision of "outdated polices with that impetus to embrace new technology. Somehow, we are going to have to navigate our way and make sense of it all."

There has been criticism from other Web whizzes as well. At the moment, comments are not posted on a bulletin board, and apparently there is only one way, through the "contact us" feature, to send a message.

Granted, it's just a Web site. But it will be closely watched in the coming days as a visible symbol that the Obama administration sincerely wants to embrace technological advances to find new solutions to age-old problems. After all, Obama's campaign and transition teams used high-tech ways to listen, engage, mobilize, collaborate and collect piles of donations. And the new president is famously plugged-in with his omnipresent BlackBerry.

"Obama represents the opportunity for two-way communication between the government and the people," says Mark Drapeau, an associate research fellow at the Center for Technology and National Security Policy. The center is located at the National Defense University, the official government center for military education that is run by the chairman of the Joint Chiefs of Staff.

Drapeau refers to the to-and-fro model of communication as "government with the people."

In addition to White House techies, a battalion of social-tech-savvy government employees, contractors and special interests in Washington, D.C. — a conglomerate that Drapeau refers to as "the Goverati" — have already been testing new Internet tools for all kinds of government missions.

The Bush Web site was an old-school information board, proffering bios and photos and official releases. There were a few cool-tool aspects as well, including occasional chats with folks like the official White House photographer, a video guide to the Cabinet room, a clickable panoramic photo of the Blue Room and the annual holiday BarneyCam feature that broadcast scenes from 1600 Pennsylvania Ave. from the first dog's point of view.

Or you can try the Wayback Machine of the nonprofit Internet Archive.

No real shock that Obama's New Media team reported in the early days that, digitally speaking, the whole Bush White House had an antediluvian feel to it. "It is kind of like going from an Xbox to an Atari," Obama spokesman Bill Burton told The Washington Post.

Even so, not everyone has gotten the memo that there has been a change in the White House. On Friday morning, when we mistakenly typed a comma after www, Microsoft's Live Search told us that Whitehouse.gov "is the official Web site for the White House and President George W. Bush, the 43rd President of the United States."

'A Platform For Engagement'

Once the Obama site is up and humming, it could be a window into the soul — and transparency or opacity — of the president's administration. Micah Sifry is co-founder of the group blog techPresident — an offshoot of Personal Democracy Forum, a think tank that focuses on the intersection of politics, social media and democracy. "Obama is moving in the direction of a more open, transparent and participatory government," Sifry says "but it's still early in the process. He's made all kinds of good promises in this vein, and the indications we're getting are all positive. But the devil is in the details."

Sifry expects the administration to use WhiteHouse.gov "as a platform for engagement."

Though the new Web site is slow out of the blocks, Sifry says he sees great potential. "The creation of an official blog is one step, as is the creation of tools for public input and conversation. We saw some important attempts in this direction on the transition site, Change.gov, with the use of tools like IntenseDebate and GoogleModerator to give site visitors a way to post their own comments and proposals and vote the best ones to the top."

He adds, "I expect we'll see similar efforts on WhiteHouse.gov. They have already reiterated Obama's promise to invite public comment on bills before they reach his desk for signing."

The flip side to such an open-portal policy, of course, is that Obama may no longer feel he needs the traditional media to communicate with, and to, the populace. Early signs of his indifference to the mainstream media: his exclusion of broadcast reporters from the mulligan swearing-in Wednesday night and his communications team tightly controlling photos from the White House during the early going.

OK, OK, it is early. And, as President Obama has said many times, change does not come overnight. The new pixels and tag words have to move into Whitehouse.gov. New links need to be broken in and old pages packed up and shipped off to storage. The whole site must get settled before being fully judged by a progressively more digital public.