Accessibility links
From War to Personal Battle NPR blogger and Morning Edition commentator Leroy Sievers is the subject of a Discovery Channel documentary about his struggle with cancer. The documentary is by Discovery Managing Editor Ted Koppel, who is an NPR senior news analyst and an old friend and ABC News colleague of Sievers. Koppel reflects on their experience. 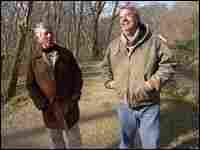 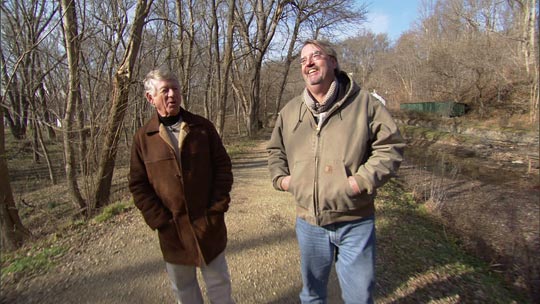 NPR blogger and Morning Edition commentator Leroy Sievers is the subject of a Discovery Channel documentary on Sunday, May 6, about his struggle with cancer. The documentary is by Discovery Managing Editor Ted Koppel, who is an NPR senior news analyst and an old friend and ABC News colleague of Sievers. We asked Koppel to reflect on their experiences, which include reporting from Iraq.

Leroy and I took the prospect of embedding with the 3rd Infantry Division seriously. We trained for months. We hiked along the towpath of the C & O Canal in Maryland for five, six, eight miles at a time, carrying backpacks loaded with forty pounds worth of weights wrapped in towels. We debated wearing our helmets and Kevlar vests and then concluded that the memories of 9/11 were too fresh; and that the vision of these two military apparitions (that's how we saw ourselves, at least) carrying bulging backpacks and marching in the direction of the nation's capital, might arouse suspicions.

It never occurred to us, veteran newsmen that we are, that the 3rd ID is a heavy armored division. Nobody walks. Certainly we never did. Not in Kuwait, nor rolling mile after mile through the Iraqi desert toward Baghdad. For the most part we rode in our unarmored Range Rover. Now, we were wearing all of our gear, the bio-chemical suits, the armored vests and (sometimes) the helmets. We wore the suits despite the 90-degree desert temperatures, (relatively cool for Iraq in March), and the added heat of closed windows and no air conditioning. When you left the windows open, the sand kicked up by the tanks and armored personnel carriers ahead of us filled the vehicle. We drove at night, without night vision goggles, knowing that if we lost sight of the vehicles in front of us, we'd be lost and alone in hostile territory. We slept in that same vehicle.

We came out of Iraq, still friends.

All of that was after Leroy's first bout with cancer. He was diagnosed with colorectal cancer in late summer of 2001. Later that fall, after his successful surgery, I took him down along the C & O Canal, which is close to his home and mine, for a little rehabilitation. We may have walked a hundred yards the first time. Leroy was weak as a kitten. Over the months, we worked up to regular 5-mile power hikes. I'm 5-foot-9, Leroy is close to 6-foot-5. Sometimes, I'd have to jog just to keep up. Eventually we were doing those power hikes with the 40-pound backpacks; and (for me, at least) the memory of Leroy's colorectal cancer began to fade.

Late in 2005, Leroy and I went to the movies to see Jarhead. He was out of work at the time and feeling a little blue. His speech was a little slurred when I picked him up. I thought he'd had a drink or two. That wasn't like him; but I was driving and I didn't push the issue. I should have.

It turned out that Leroy's colorectal cancer had returned and metastasized. He had a tumor on the brain, one on his spine and several on his lungs. It was, they said, stage 4. It's hard to be precise about such things, but his doctors told him that he would likely live another six to 20 months. A few weeks later, I raised the subject of our doing a series of conversations; something to lay down a record of the last months — however few or many there might be.

We have been doing that now for about 15 months. Those conversations are at the core of a three-hour television special on the Discovery Channel, at 8 p.m., Sunday, May 6th.

Leroy's own ruminations on the ups and downs of "Living With Cancer" have been the subject of a remarkable blog diary he writes here on npr.org. Leroy's also been appearing on Morning Edition. We joke that we are competing for air time.

It's been, as Leroy says, an emotional rollercoaster. Lately, things have been going surprisingly well. So well, in fact, that Leroy's started hiking on the canal again. He's been looking at hot cars and a set of drums. I have a barn, some distance from my house, which may become a home for the drums.

The danger all along has been living in denial. I've found it difficult to really believe that, in a matter of months, Leroy may succumb to his cancer. Lately, difficult has become impossible.