Accessibility links
From Gollum To 'Inkheart,' Actor Enlivens Fantasies British actor Andy Serkis is best known for his iconic role as Gollum in The Lord of the Rings trilogy. In the new film, Inkheart, he plays another fantastical villain. He discusses fantasy, reality and why he thinks he should have been considered for an Oscar for Gollum. 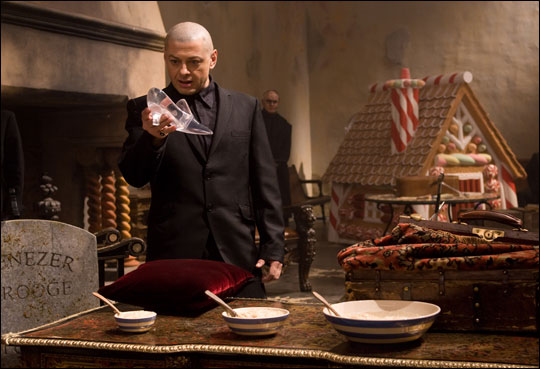 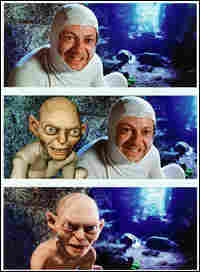 "Gollum is probably the most actor-driven digital creature that has ever been used in a film before," Peter Jackson has said. Courtesy Andy Serkis hide caption 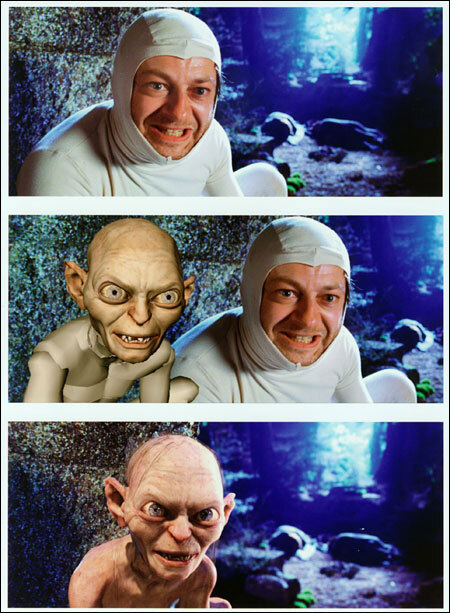 "Gollum is probably the most actor-driven digital creature that has ever been used in a film before," Peter Jackson has said.

Before he had dreams of becoming an actor, Andy Serkis wanted to be a painter. Above, Y Company, an oil painting he created while on location for Deathwatch. Courtesy Andy Serkis hide caption 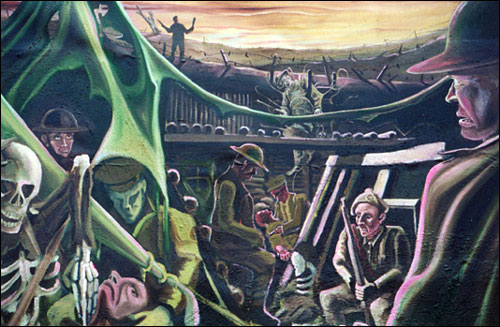 Before he had dreams of becoming an actor, Andy Serkis wanted to be a painter. Above, Y Company, an oil painting he created while on location for Deathwatch.

British Actor Andy Serkis, who played Gollum in The Lord of the Rings trilogy and Kong in Peter Jackman's King Kong, is very comfortable straddling fiction and reality.

"I think I spend most of my time not living in reality, actually," he tells NPR's Alex Cohen.

In his latest film, Inkheart, he's once again jumping between reality and fantasy. As a thuggish bandit named Capricorn, he's launched from the pages of a fairy tale into the modern world when Brendan Fraser's character reads about him.

Capricorn spends the film adjusting to the "real world" and its simple pleasures — such as duct tape.

"He's a man who enjoys what this world has to offer in terms of adornment and material goods, and duct tape is just one of the very useful things that his henchmen managed to use ... to keep his opposers quiet, you know," Serkis explains.

The villainous Capricorn eventually decides he likes living outside the book so much that he never wants to go back.

"He is the character with a heart as black as ink, and he is nothing in that world of the book. So, when he gets to this world, he's absolutely paranoid about being sent back into it and does everything in his power to stop that from happening, " Serkis says, adding that this involves terrorizing an entire village.

In The Lord of the Rings, Serkis mastered another kind of terror. Some say he deserved an Oscar for his exceptional bipolar performance, but that simply wasn't an option. No matter how "precious" his Gollum characterization, the Academy of Motion Picture Arts and Sciences said Serkis couldn't be nominated because it involved digital manipulation.

This sparked a heated debate, which is likely to intensify as more films employ this sort of digital technology. In some ways, the current standards are arbitrary, Serkis argues. Why ban someone for digital alteration and not other types of enhancements?

"Actors' performances in films are enhanced in a million different ways," he explains, "down to the choice of camera shot by the director — whether it's in slow motion or whether it's quick cut — or ... the choice of music behind the close-up or the costume that you're wearing or the makeup. ... You know, actors' performances do not stand alone in any film, live action or whatever."

Soon, Serkis will play a role that should please even anti-effects traditionalists: that of the late British rocker Ian Dury. There won't be any gorilla suits or digital magic, just a character inspired by a real person. Serkis describes Dury, who died in 2000, as "the proto punk in the 1970s, when the music in the U.K. just came out of the hippie movement." He says it's "a great story because, primarily, he was a polio sufferer and had a withered left arm and left leg."

When Dury rose to fame, he was in some ways "too old to be a rock star," Serkis says, "but he had this brilliant, brilliant energy and fantastic ability to write great lyrics."

Once again, though, Serkis' character will have walk a narrow line between two opposing forces. One is Dury's "passion for his music and the complete and utter desire to get out there and basically shake everything up" and the other is his intense love for his family.