Accessibility links
Eternal Flame: Zippo Set To Reach Milestone The windproof Zippo lighter's familiar click and blue flame have been an American mainstay. As the company prepares to make its 500 millionth lighter, it is still guaranteeing them for life — and repairing them in Bradford, Pa., where the company was founded in 1932. 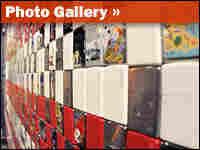 Images From The Zippo Museum

If you search for the rural Pennsylvania town of Bradford on the Internet, you'll find some interesting facts. It was an oil boomtown in the late 1800s and today is home to the oldest continuously operating oil refinery in the United States. Mezzo-soprano Marilyn Horne was born there in 1934.

And since 1932, Bradford has been the home of the Zippo lighter.

The windproof lighter with its familiar click and blue flame has become an American mainstay to everyone from GIs hunkered down in foxholes in Germany and Vietnam to average Joes. Zippos have been a fixture in films about wartime and even in feature films like the Indiana Jones franchise.

In fact, says Zippo spokesman Pat Grandy, "In 1996, there was a Zippo in every film nominated for Best Picture."

Zippo museum curator Linda Meabon has worked for the company since 1967 and knows all the Zippo lore — including how founder George Blaisdell came up with that nifty name.

"The zipper had recently been invented," Meabon told NPR's Liane Hansen during a tour. "He loved catchy phrases but couldn't use 'zipper' — so he took off the "er" and added "o" — and that's how we've become Zippo."

Since the 1930s, more than 450 million Zippos have been manufactured. The lighters are guaranteed for life, so there are a lot of them still out there. They are emblazoned with four-leaf clovers or smiling Buddhas, grinning skulls, Harley insignias, American flags and evil clowns. But the most popular models are Elvis and the Playboy Bunny.

As an old TV ad suggests, the Zippo stands up to "the fan test" — the tiny holes in the small chimney of the lighter are what make the Zippo windproof.

Blaisdell got the idea one day while having a smoke with a friend out on the porch of a country club. His friend's European lighter seemed to work in the wind. Blaisdell saw an opportunity to adapt that design, and his work has lasted.

The Zippo workshop sits behind the museum in Bradford. There, a handful of women, many of them smoking, sit hunched over workbenches. The lighters they process and repair are sent in from all over the world: Scotland, Missouri, Washington state, New York. Some 300 arrive every day.

Often, there's an accompanying letter. In one such letter, the writer explained that the Zippo had once belonged to the writer's grandfather.

"It's not like a toaster or a blender, or something that you can just fix and send out," said Grandy, the company spokesman. "These are really family treasures, so we try to be extremely careful with tracking them and fixing them."

Repair worker Barbara Gervais has been with Zippo for 21 years. She says there's one story that still sticks with her.

"This one guy said his pig ate his lighter — and he followed him around for two weeks" waiting to reclaim it, Gervais said with a laugh.

Despite the lighter's iconic status, Zippo faces big challenges. The decline in smoking as well as rules about carrying common cigarette lighters onto airplanes — rules that are no longer in effect — have hurt sales. Counterfeiting is also a huge problem.

And because of health and fire-safety concerns, the tradition of holding up a lighter at the end of a rock concert to show appreciation and encourage an encore is no longer practiced.

But Zippo has found a solution for enthusiastic music lovers: They can download a virtual Zippo lighter for their iPhone. As Grandy explained, the application even includes the lighter's iconic sounds: the springy click of the lid opening, the sparking grind of the flint wheel, and the clang of the lid closing. And the flame even moves.

That lighter exists only in cyberspace — but Zippo expects to sell its 500 millionth real lighter by the end of 2009.