Accessibility links
Between Takes: The 'Kind Of Blue' Sessions In honor of Miles Davis' 50th-anniversary Kind of Blue reissue, music writer Ashley Kahn looks at a few of the stories behind the scenes of the legendary recording sessions.

Listen
Between Takes: The 'Kind Of Blue' Sessions 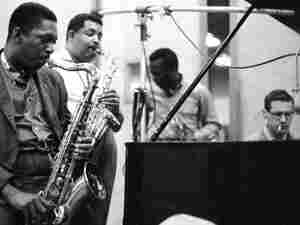 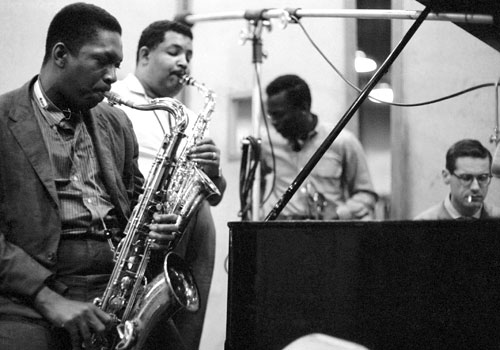 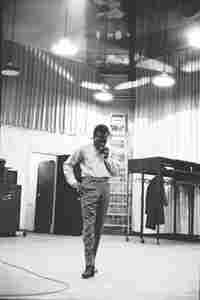 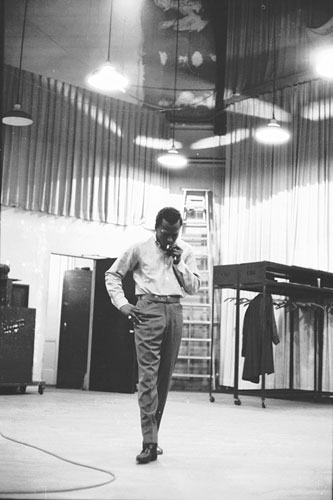 Miles Davis, alone in the studio.

Hear Miles Davis In The Studio

Hear A Song From 'Kind Of Blue' 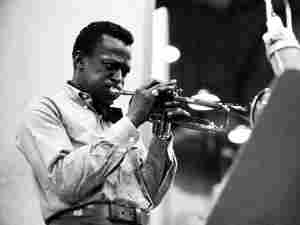 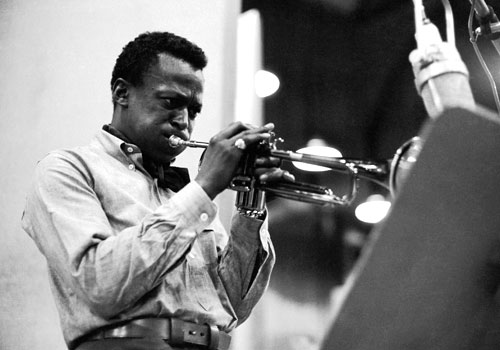 These days, an official request to review the reel-to-reel tapes from a typical Columbia Records recording session in the late '50s — say Johnny Mathis, Duke Ellington or Doris Day — brings up boxes upon boxes of reels. But Miles Davis' Kind of Blue sessions hardly dented the tape budget. Three reels of Scotch 190, at the time a workhorse product of the recording industry, hold all that was recorded at those two historic dates in 1959.

It's not much, but it reveals a lot. This year marks the 50th anniversary of Kind of Blue, and Sony Legacy (which owns the Columbia catalog) has issued a 2-CD/1-DVD box set that includes the music, an ornate book, a vinyl copy of the original LP release and, for the first time, snippets of studio chatter. For listeners, it's the closest we can come to witnessing the making of a melodic masterpiece. For Davis and saxophonists John Coltrane and Cannonball Adderley, pianists Bill Evans and Wynton Kelly, bassist Paul Chambers and drummer Jimmy Cobb, Kind of Blue was simply another day at work.

From his liner notes to the Kind of Blue reissue, excerpted below, music writer Ashley Kahn looks at the legendary sessions.

Take 3 of "Freddie Freeloader" makes it through the familiar theme (loosely based on the melody of "Soft Winds") and on into Wynton Kelly's solo. Before the second chorus of the piano ends, Davis whistles off the take.

Three points of interest here: First, even after the third take of "Freddie Freeloader," Davis is still tinkering, making small structural changes after calling off the performance with a whistle rather than a shout (made necessary by the permanent damage he caused his vocal cords in 1955 after getting into a shouting match with a club manager).

Second, despite Davis' general compulsion to simplify harmonic rigidity using a modal approach on most of Kind of Blue, he was still a stickler for structural precision — willing to call off a take as Kelly misses an unusual but significant structural twist during his solo. Davis created "Freddie Freeloader" as 24-bar blues, rather than the standard 12-bar form, and he wanted that form followed.

And third, as a bandleader, Davis gave minimal instruction.

"He never told anyone what to play, but would say, 'Man, you don't need to do that,' " Cannonball Adderley recalled in a 1972 radio interview. "Miles really told everybody what not to do. I heard him and dug it."

Irving Townsend: Just you four guys on this, right, Miles?

Faintly perceptible in the background is Evans' voice, directing the structure of the tune.

The take ends almost immediately. Evans abbreviates the introduction, leading to a brief confirmation of the form.

Bill Evans: We better do that again...

Paul Chambers: Can we start on the last four bars?

MD: Last four bars, but then you repeat it.

Evans plays the introduction, and Davis' muted trumpet is heard as Jimmy Cobb starts playing the snare, using only one brush to achieve a lighter feel than normal. Chambers hits a wrong note and the take breaks down.

MD: Use both hands, Jimmy.

MD: Just use both hands and play it the best way you can. You know, it'll be all right.

There's a wealth of details evident in the dialogue preceding the last tune that day.

As Townsend's question seems to suggest, "Blue in Green" may have been originally intended as a quartet performance — a more contained meeting of Davis and Evans, the two architects behind Kind of Blue. At the last minute, the bandleader informs John Coltrane — whose talent at imbuing a down-tempo ballad with heartbreaking delicacy was then gaining renown — that he should play, as well. Note Davis' standard protocol: He informs the producer first, then asks (or, rather, tells) Coltrane to play on the tune.

In 1986, keyboardist and journalist Ben Sidran asked Davis about Kind of Blue: "Does the success of that record surprise you, Miles? It seems to have been such a simple record in a lot of ways."

"Not back then," Davis replied. "Because Bill Evans, his approach to the piano brought that ... out. He used to bring me pieces by Ravel ... and Bill used to tell me about different modes, which I already knew."

It seemed to require effort at times, but Davis never denied Evans' contribution to, or the collaborative heart of, Kind of Blue. Nowhere is their teamwork more evident than in the ramp-up to the final take of "Blue in Green." Evans took an active role for the first time during the session as the two speak and work out the structure of the tune.

Cobb remembers that, when recording "Blue in Green," Davis' instruction was simple: "I want a floating sound." Uh, OK. Cobb's response was to try a one-handed approach to the brushes. After hearing the result, Davis urged him to play the brushes normally.

MD (to IT): You know, your floor squeaks, you know. You know what I mean? Can you hear me?

John Coltrane: It's all part of the tune, man.

The members of the Miles Davis Group arrived in jolly spirits for the second session that produced music for Kind of Blue. The feeling must have been infectious. In reference to Davis insisting on keeping the rattle from the open snare on "So What" at the last session, Townsend announced (or "slated," as it's known in studio parlance) the first take of the afternoon as "Surface Noise."

The good humor persisted: Davis pointed out to Adderley that his chair would make a noise if he stood up during the take, to which the alto saxophonist responded with a zinger that made Davis chuckle, before baiting Townsend by complaining about the studio floor squeaking. The producer acknowledged the ribbing, as Adderley dismissed the concern, calling it "surface noise." Unable to resist a quick pun, Evans chimes in with his own zinger ("surf-ass noise"), and Coltrane mimics Davis' contention that any studio noise is part of the performance. Adderley, catching Evans' pun a beat later, laughs and repeats his line. Not a high point of improvised comedy, but an amusing snapshot of the bonhomie often in play at Davis' sessions back then.

Ashley Kahn is the author of Kind of Blue: The Making of the Miles Davis Masterpiece and A Love Supreme: The Story of John Coltrane's Signature Album.