Accessibility links
Madoff Investor Faces Loss Of Life Savings At 76 After a lifetime of working in the garment business and saving responsibly, Allan Goldstein, 76, says he's scrambling for money all over again. He says he invested his money with Bernard Madoff's securities firm and then discovered his fortune had evaporated to "absolutely nothing" after the scandal broke. 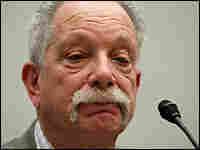 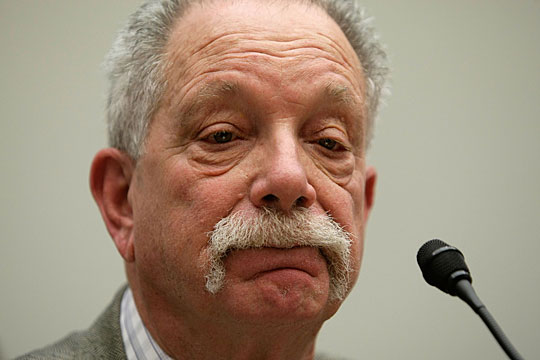 Allan Goldstein, a retiree and investor with Bernard L. Madoff Investment Securities, testifies during a hearing before the House Financial Services Committee on Jan. 5, 2009.

The alleged Bernard Madoff financial scheme was so expansive and complex, it's often difficult to understand. Allan Goldstein, 76, testified before the House Financial Services Committee earlier this month to help explain what the scandal has done to real people like himself. He has not spoken to the press since his testimony.

Goldstein tells Scott Simon that after a lifetime of working in the garment business and saving responsibly, he's scrambling for money all over again. He discovered that his fortune of a few million dollars had evaporated to "absolutely nothing" after news of the Madoff scandal broke.

"I used up all my assets over the years to let my Madoff account grow so I could retire with a decent income," says Goldstein. "So I had no assets left except cash and my life insurance policies. I'm having trouble paying my mortgage. My children are helping me out. My house is up for sale."

He and his wife of 52 years, Ruth, are retired in upstate New York. Goldstein says he was introduced to Madoff Securities by his accountant, who told him Madoff's returns were strong — between 10 percent to 12 percent in good years and bad years. Madoff, he was told, was a "safe" place to put money.

Prosecutors have said the disgraced financier ran a Ponzi scheme for years that bilked investors all over the world out of billions of dollars. Madoff remains under house arrest at his Manhattan apartment.

Now, Goldstein is looking for a job, something he didn't expect to be doing in his 70s. He says he needs to earn money just to cover food and car expenses. "I can't keep taking money from my children," he says.

Goldstein and his wife receive Social Security — about $22,000 a year, he estimates.

Goldstein started out selling textiles to garment manufacturers, making $200 a month. The first apartment he shared with his wife was a furnished basement.

"Through hard work, being aggressive and knowing what I was doing," says Goldstein, "I was able to advance myself and save some money, and we started this business with this money we saved."

Despite the devastating loss, Goldstein refuses to be paralyzed by anger and self-pity.

"The first three days, four days, I was just filled with anger, because I was in shock," he says. "I lost all my money. I didn't know what to do or where to turn. And I realized I couldn't go on and live my life consumed with anger. So right now, I don't really care about Bernie Madoff. I don't care if he goes to jail. I don't care if he stays out of jail. It's not going to improve my life one way or the other, so I really don't care."

Goldstein does feel that government regulatory agencies failed people like him. But he believes it was more than a failure. "I believe [the government was] complicit in this," he says. "There were so many red flags, so many warning signals, so many letters written about this, and they did nothing."

Many times, Goldstein felt uncomfortable to have all his money in one place. But he says he had absolutely no inkling that anything was amiss.

"The statements came every month," he says. "Any monies I needed to withdraw were taken out with no problem. ... There were banks, hedge funds who put billions of dollars into this man. They must have done some due diligence — and they also invested their money."

Goldstein says he has since learned that the statements he received every month were fabricated.

"We all got similar statements that showed selling and buying and ownership and profit for the month. And long and short positions. It was a very complicated statement," says Goldstein, adding that he never met Madoff or had any direct contact with him.

"It's a horrible situation, and I have to tell you that I receive e-mails every day. There are so many, many people in the same position that I'm in that it's heartbreaking. Heartbreaking," he says. "I have my health, and my wife is healthy. ... We'll get through this somehow."