Accessibility links
Benny Golson Recreates His Great 'Jazztet' He grew up with John Coltrane, gigged with Art Blakey and shared the silver screen with Tom Hanks. Now, on the eve of 80, illustrious saxophonist and jazz composer Benny Golson is re-creating his greatest ensemble: the six-person Jazztet.

From The Old Jazztet 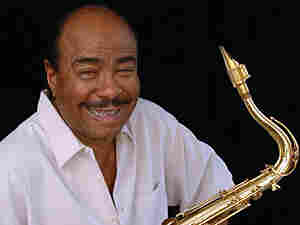 Jazz saxophonist Benny Golson has spent much of his career writing for and playing with the greats.

Early on, Golson was a member of Dizzy Gillespie's band, and also worked with Lionel Hampton, Art Blakey and Johnny Hodges. As a composer, he's written some of the most memorable songs in jazz, including "I Remember Clifford," "Whisper Not," "Along Came Betty" and "Killer Joe."

Golson also wrote scores for TV shows, including M*A*S*H, Mission: Impossible and Cosby. On screen, he even had a cameo in the feature film The Terminal: When a hapless traveler played by Tom Hanks is finally released from airport purgatory, he heads straight to a club to meet Golson — one of his idols.

But Golson also enjoyed a memorable stint as a leader in the jazz world. In the early 1960s, he and trumpeter Art Farmer co-led a six-person ensemble called the Jazztet. Golson's tight arrangements, lilting melodies and relaxed swing concepts helped make the Jazztet one of the most popular small groups of its era.

Now, Golson has just released a new album called New Time, New 'Tet. It has the same instrumentation as the original Jazztet, though all the players (save Golson) are new.

"We've got a new approach to what we're doing now," Golson says. "We didn't only draw upon the jazz things, but we went to the realm of some of the classics, like Chopin and Giuseppe Verdi, with a new approach to it."

On the eve of his 80th birthday, Golson spoke with Scott Simon about the new release and his life in music. Growing up in Philadelphia, Golson was friends with John Coltrane.

"John and I were like blood brothers," Golson says. "I was 16 when I met him — he was 18. And we spent our time in my living room, listening to lots of 78 [rpm] records, trying to figure out what was going on. And we had a beat-up piano in the corner, and I'd play after a fashion, while he played. And he played worse than I did — for me.

Hear the full interview with Benny Golson by clicking on the link at the top of the page, starting around 12 p.m. ET on Saturday, Jan. 24.