Accessibility links
New Masons Drawn by Brotherhood, Not Myths Rumors of intrigue and hidden treasure have long swirled around the Freemasons. The reality is less mysterious, yet the centuries-old fraternity is growing, drawing recruits from a younger generation seeking spiritual brotherhood. 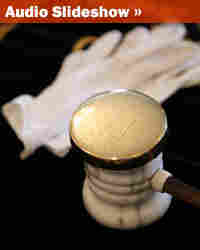 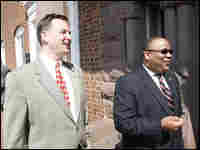 Alan Patterson, 39, is the first African-American to be a senior officer of the Naval Lodge # 4 in Washington, D.C., near the Capitol. He's pictured with his Masonic brother, Michael Allen Webb, 43. Steve Drummond, NPR hide caption 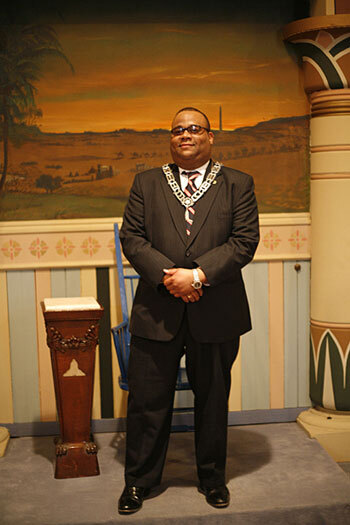 Alan Patterson, 39, is the first African-American to be a senior officer of the Naval Lodge # 4 in Washington, D.C., near the Capitol. He's pictured with his Masonic brother, Michael Allen Webb, 43. 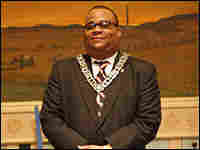 Patterson wears a large, silver neckpiece, what he and other officers call their "Masonic bling." Steve Drummond, NPR hide caption

Patterson wears a large, silver neckpiece, what he and other officers call their "Masonic bling." 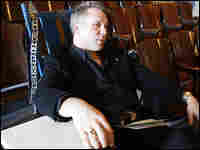 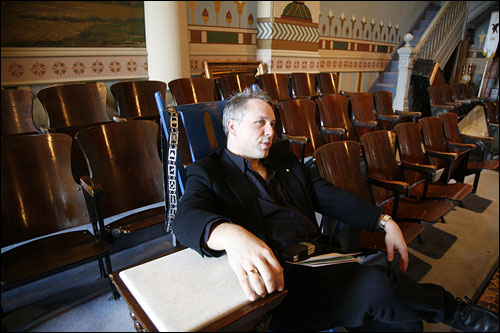 David Johnson, 36, is junior warden of the Naval Lodge.

George Washington wasn't the only Founding Father who was a Mason. Several of the 56 signers of the Declaration of Independence were members, too, including Benjamin Franklin. According to Masonic Web sites, 14 presidents of the United States have been masons, including Washington, Theodore Roosevelt, Andrew Jackson, Franklin Roosevelt, Harry Truman, and Gerald Ford.

In the 18th century, the word on the cobblestone street was that Freemasons were an occult group promoting a pagan agenda through the American government.

After all, members themselves call Masonry "the craft." And the Masonic founders of America built the roads around the U.S. Capitol in the form of a five-pointed star – a pagan symbol.

Then there is that "seeing eye" pyramid on the dollar bill – a known Masonic symbol. Some conspiracy theorists have argued that the pyramid is evidence of a Masonic cabal within the U.S. government. (Historians pooh-pooh that idea. It's just a coincidence, they say.)

Although the reality of Freemasonry is much less mysterious, it's appealing to a younger generation.

On a recent evening, about 100 elderly men gathered at the Scottish Rite Masonic Hall in Washington, D.C., for an annual ceremony honoring masons who've died in the past year.

As the event began, the men — dressed in suits and ties, some in tuxedos — stood and sang the national anthem. Then one of the Masonic leaders stepped up to the podium and read a list of names of 65 brothers who have died — or, as the Masons say, "journeyed on to the celestial lodge."

The World War II generation that makes up the bulk of Freemasonry membership in the United States is dying at a quick rate. But now, a new generation of Masons is picking up the torch.

Alan Patterson is a member of Naval Lodge 4 on Pennsylvania Avenue in Washington, D.C. He and some of his Masonic brothers sit at a round kitchen table in the dining hall of their lodge. They joke about the rumors and speculation that have surrounded Freemasonry for generations.

"All the stuff you see on the Internet — from devil worship to sacrificing virgins — I joke, 'You know, we do have a couple of New York Yankees fans, but they're not really considered Satan,'" he says.

Unlike older Masons who joined because their fathers were members, Patterson is the first Mason in his family. During rituals, he and other officers wear large silver neckpieces, which they call their "Masonic bling."

While they discount the conspiracy theories, these Masons clearly enjoy them.

David Johnson, 36, is junior warden of the lodge. "It's not like we're sitting in here, polishing the Holy Grail every Thursday night when we meet," he says with a sarcastic grin. "We drink out of the Holy Grail, but we don't polish it. It couldn't take it — it's very old."

Johnson became a Mason at age 25. He has spiky salt-and-pepper hair and three small gold rings in each pierced ear. He gives a tour of the main lodge room. The walls are painted bright blue, and they're covered in Egyptian hieroglyphics and Masonic symbols. Johnson explains that a big blue letter G at the far end of the room does stand for God; but even more importantly, he says, in Masonry, G stands for geometry.

Masons describe their fraternity as a brotherhood that teaches moral lessons through allegory and secret rituals. It spells out a structured code that Masons are to live by – truth, honor and charity. Masons pledge to take care of one another and their families for life.

There are at least 200 Masonic charitable foundations or programs in the United States. They fund everything from hospitals to charter schools. Overall, Masons donate millions of dollars each year to charities.

It's not a religious organization, but Johnson says Masons have to profess a belief in a higher power.

"Masonically, we talk about God as the architect of the universe," he says. "It really doesn't matter how a brother defines his faith, as long as he believes in a deity."

That universality has put Masonry at odds with organized religion for centuries. The Roman Catholic Church has long considered Freemasonry to be an anti-Catholic cult.

But Alan Patterson, a church-going man himself, says all of that stuff about undermining religion is just bunk; at its core, he says, Masonry is something really simple.

"We get together, we turn the phones off, we turn the pagers off, we close the doors, and we dedicate ourselves to bettering ourselves as men," Patterson says. "It's quaint, but it's appealing to a younger group of people."

In its glory days in the 1940s and '50s, the Masons had 4 million members in the United States, and 50,000 lodges. Now, they have about 1.8 million members. But many lodges — including the Naval Lodge in D.C. — say their average age is going down. Why?

Mark Tabbert, 43, is the director of collections at the George Washington Masonic National Memorial in Alexandria, Va. Tabbert is the former grand master of his lodge in Massachusetts; he's also a Masonic history buff. In his office, a plastic action figure is propped on a bookshelf with a little piece of paper stuck to him; it reads "Masonic superhero."

Tabbert says that when membership plummeted during the counterculture movement of the 1960s and '70s, the Masons accepted virtually anyone who knocked on the door.

"In the quest to be larger and to do more good and to have more fun," he says, "they let in a lot more people, and it dropped the standards of the fraternity."

He says the current renewed interest in Freemasonry has brought in men who take a more serious approach to the ritual than older generations did, and who want to tighten initiation standards and raise dues. But he says the fraternity must watch out for men who sign up because of misguided theories linking Freemasonry to "divine secrets."

"Once you get through the romanticism of a quest that doesn't exist, or foolishness about the Knights Templar or the Arc of the Covenant or the Holy Grail, you find out that there actually is a quest," Tabbert says. "And the quest is the inner journey, the self improvement, to be useful in society and improve yourself."

While the Masons may not have any big secrets, they do have treasures – including the gavel that George Washington used to hammer in the cornerstone on the Capitol building in 1793. The head of the gavel is made from the same marble used in the original interior of the Capitol, the handle made from native American cherry wood.

It's one of the most treasured Masonic artifacts, guarded by a lodge in the Georgetown neighborhood of D.C. Longtime Mason Dean Klatterbach says the gavel represents a bridge to the past and to Washington himself, the quintessential American Masonic hero. It's a powerful connection for Klatterbach, who becomes visibly emotional when discussing the gavel.

"He still stands as a man of indisputable integrity," Klatterbach says of America's first president. "It's pretty nice to be associated with someone of that stature."

But for many new, younger members, Masonry's attraction lies less in historical icons and artifacts than in its sense of fraternity. Johnson, the junior warden of Naval Lodge 4, says what bonds Masons together is oral tradition: passing knowledge, experience and wisdom from generation to generation.

"It takes another brother to show you the way and take you down the path to get to the enlightenment that we offer," he says.