Accessibility links
Astronaut Wally Schirra Dies at 84 One of the original Mercury Seven astronauts has died. Wally Schirra was the only man to fly in all three of NASA's early space programs — Mercury, Gemini and Apollo. He was 84. 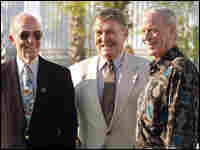 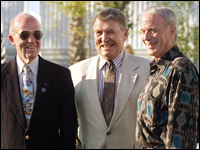 Wally Schirra, one of NASA's original seven astronauts and the only man to fly in all three of the nation's first space programs — Mercury, Gemini and Apollo – died Thursday in a California hospital after suffering a heart attack. He was 84 years old.

Schirra was one of NASA's original Mercury Seven. In 1962, he became the third American to orbit the Earth. Only two other Mercury astronauts are still living — former Sen. John Glenn and Scott Carpenter.

Historian Roger Launius of the National Air and Space Museum said Schirra and the other Mercury Seven astronauts will always have a special place in the nation's history.

"These were the first ones ... and we've assigned them a heroic status because of that," Launius said.

Apollo 7 blasted off on Oct. 11, 1968. It was a critical moment for NASA. The year before, a fire on the ground had killed three Apollo astronauts, shaking the public's confidence. And Apollo 7 was the first real test of the spacecraft that would take people to the moon.

To command the mission, the agency picked Schirra, a Naval officer, a test pilot and an experienced astronaut. The mission was a success, but Schirra was low-key with the crew of the recovery ship that plucked him out of the ocean: "... We went around the world — but to terminate the mission where we wanted to, where our clothes were waiting for us, that was the high point for us."

Later, during the Gemini program, Schirra pioneered the art of formation-flying in space. NASA spokesperson Rob Navias said it was critical to later missions that would rely on docking two or more spacecraft.

"Schirra flew the Gemini 6 capsule to prove that we could actually rendezvous with another orbiting spacecraft," Navias said, noting that Schirra put his craft within a few feet of Gemini 7.

Besides his technical skill, Schirra was known for his prowess at public speaking. Walter Cronkite often had him as a guest on CBS News. The two chatted during live coverage of space events, including the first moon landing in 1969.

Carpenter recalled one of Schirra's traits that really stood out: "Wally was always good for a chuckle. He made everybody laugh."

Carpenter said he is very saddened by Schirra's death.

"It marks the passing of a dear friend, colleague, brother ... and it's a bad time for everybody in the space program."