Accessibility links
Howard Levy: Reinventing The Harmonica Levy's house in Evanston, Ill., is filled with musical instruments: ocarinas, keyboards, percussion and especially harmonicas. When he was just a teenager, Levy took a regular dime-store harmonica and figured out how to play a full chromatic scale. Today, Levy is still using his instrument of choice to break musical boundaries.

'Waltz' (from Concerto for Diatonic Harmonica and Orchestra) 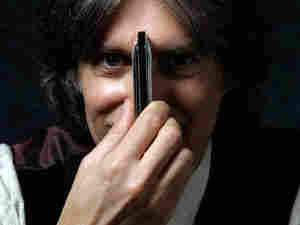 Howard Levy's house in Evanston, Ill., is filled with musical instruments: ocarinas, keyboards, percussion and especially harmonicas. When he was just a teenager, Levy took a regular dime-store harmonica and figured out how to play a full chromatic scale. His harmonica virtuosity has since landed him gigs with artists ranging from Tito Puente to Garrison Keillor to Bela Fleck. Levy was a founding member of the Flecktones.

Levy has made a career out of showcasing the harmonica as an instrument which can stand on its own, with limitless possibilities. He's even earned a Grammy.

In the 1970s, Levy revolutionized harmonica playing by inventing a breathing method known as over-bending, allowing players to reach a wider range of notes. Levy continues to utilize non-traditional methods, even unique composing and practicing environments. Because the harmonica can be played with one hand, Levy, behind the wheel of his car, sometimes lets the freeway become his rehearsal space.

Although Levy composes music at his grand piano, he says he feels closer to the notes when he's playing his harmonica.

"When I picked up the harmonica, that really changed my personality, because the piano is a machine, and playing a wind instrument is just so personal," Levy says. "You're breathing the notes directly from your body, and the instrument comes alive, and it sings."

Levy says he's aware of music as a universal language, but that it's a language with a lot of dialects.

"It can be everything," he says. "Music can be a political act, it can be a mating call, it can be a mathematical equation. They're notes, but you can imbue those things with any shade of meaning or emotion that you're capable of."