Accessibility links
Carlo Ponti Jr.: Classical Music For All The conductor says that his goal is for more people to appreciate and recognize classical music for its complexity, organization and beauty. In an interview, Ponti discusses his work, his son and the best way for a classical-music novice to discover pure symphonic joy.

Pictures at an Exhibition (Kartinki s vïstavski), for orchestra, orchestrated by Ravel

Dawn on the Moscow River, prelude for orchestra (from Khovanshchina), edited by Rimsky-Korsakov 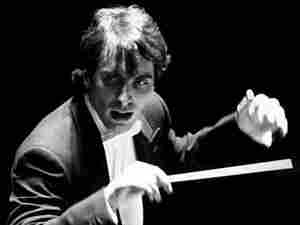 Carlo Ponti Jr. says that classical music is just music, after all. He's trying to make it popular and appreciated among more people, especially students.

"It teaches them how to live, to be organized, how to have a community, how to be unified," Ponti says. "Things that young people in this day and age really need."

Ponti is the music director and conductor of the San Bernardino Symphony Orchestra in California. He's also featured as the conductor on the new CD, Mussorgsky: Pictures at an Exhibition, by the Russian National Orchestra.

Ponti says he hopes that his rendition of Mussorgsky's compelling and romantic music will resonate, even with classical-music novices. Interestingly, Mussorgsky never truly finished a piece. Pictures at an Exhibition began as a piece for solo piano, but the composer left it before the task of orchestration was complete. In this case, French composer Maurice Ravel took it upon himself to transcribe the work for orchestra.

If Mussorgsky's sometimes harsh and jarring melodies are too much for a beginner, then Ponti suggests starting with Beethoven's Ninth Symphony.

"It's such an organic symphony," he says. "The flow of it is so natural. The themes that he chose are so universal that anyone can be touched by his message."

Hear the full interview with Carlo Ponti Jr. by clicking on the link at the top of the page, starting around 12 p.m. ET on Saturday, Jan. 24.