Accessibility links
'Spider-Man' Sequel Spins a Weak Tale Sam Raimi spent a fortune, and its stars strive for naturalism, but Spider-Man 3 proves dramatically less than the sum of its expensive, ill-unified parts. 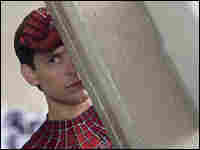 Identity Crisis: Spider-Man 3 turns out to be less than the sum of its expensive, ill-unified parts. Courtesy Columbia Pictures hide caption 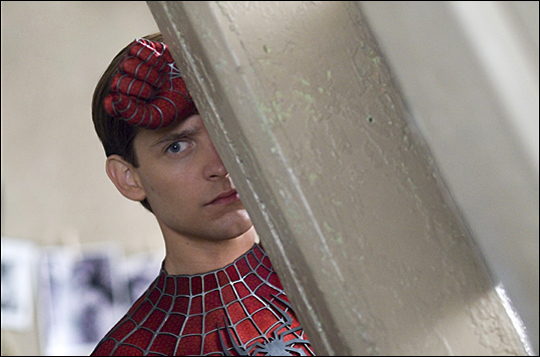 Identity Crisis: Spider-Man 3 turns out to be less than the sum of its expensive, ill-unified parts.

Once upon a time, Spider-Man was just another movie hoping to be a hit — but what a difference five years and more than $1.6 billion in worldwide theatrical revenue makes. All of that money has turned Spider-Man 3 into a film that commerce mandated, a marketing puzzle that insisted on a solution; its $250 million-plus budget and sky-high expectations make it a master that must be served, a monster to be fed, an imperious creature with a will of its own.

In the face of those unbending commercial imperatives, it is encouraging that this Spider-Man attempts to bring some originality to the table — and it's disheartening that those attempts prove insufficient. Spider-Man 3 is certainly acceptable as a sequel to a sequel, but it misses an opportunity to be a movie that could be whole-heartedly recommended to those not already ensnared in its summer-franchise web.

Though stars Tobey Maguire and Kirsten Dunst are trying to be genuine, the film's emotional component — the strength of the original Spider-Man — feels unmistakably pro forma. Even supplying both protagonists with potential new love interests doesn't keep the romantic passages in the film from feeling like they're running on fumes.

To their credit, director Sam Raimi and his team seem to be aware of this problem, and they've come up with a potentially effective new kind of opponent for Spider-Man. That opponent would be himself.

As anyone who's heard anything about Spider-Man 3 knows, Peter Parker's bright-red spider-suit eventually turns a dazzling black as his character gives in to his dark side. But rather than take the adventurous route of having a superhero suffer a legitimate nervous breakdown, the movie opts to lay it all at the feet of some nasty substance from outer space.

Though aspects of it are entertaining, Spider-Man 3 has an ungainly, cumbersome feeling, as though its plot elements came from competing contractors who didn't see the need to cooperate on a coherent final product. "We always have a choice," Peter Parker says at one point in the film. Here's hoping that the choice about whether to make a fourth Spider-Man will be based on more than the almighty bottom line.