Accessibility links
Gov. Blagojevich Skips His Impeachment Trial The Illinois Senate began the impeachment trial of Illinois Governor Rod Blagojevich Monday morning, but Blagojevich had other plans. He was making the rounds of television talk shows, taking his message to the court of public opinion. 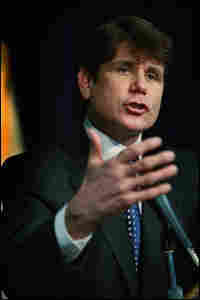 The Illinois Senate is scheduled to begin an impeachment trial for Illinois Gov. Rod Blagojevich on Monday. During a news conference Friday in Chicago, the governor said the trial is "a trampling of the Constitution." Getty Images hide caption 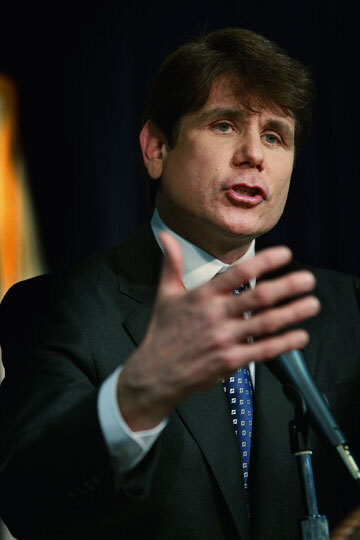 The Illinois Senate's impeachment trial of Gov. Rod Blagojevich got under way on Monday, but one thing was missing: the defendant.

For Blagojevich, who could be removed from office for allegedly trying to shop President Obama's vacant U.S. Senate seat to the highest bidder, the trial is a sham. Instead, he's taken his message to the court of public opinion, making the rounds of television talk shows.

"I think the fix is in and ... they've decided essentially to do a hanging without even a fair trial," he told NBC's Today show.

But Blagojevich has been able to take some solace from his predicament. He told the network that when he was arrested on federal corruption charges last month, he was comforted by thinking of other jailed leaders, such as Nelson Mandela, the Rev. Martin Luther King Jr. and Mohandas Gandhi.

"I'm here in New York because I can't get a fair hearing in Illinois, the state Senate in Illinois," the Democratic governor said between TV appearances.

Blagojevich, who was arrested in December and charged with what the U.S. attorney in Chicago calls a "political corruption crime spree," has referred to Dec. 9 — the day FBI agents woke him and took him from his home in handcuffs — as his own Pearl Harbor Day. He also compared himself to the Jimmy Stewart character in the Frank Capra classic, Mr. Smith Goes to Washington, saying he's fighting against a "political-industrial complex."

Weeks after his arrest, the Illinois House voted 114-1 to impeach the governor, who had been unpopular among many in the legislature long before the latest accusations.

A two-thirds majority in the state Senate is required to convict Blagojevich and throw him out of office.

In FBI wiretap transcripts, Blagojevich is allegedly heard talking about selling or trading the U.S. Senate appointment. In comments Monday, the governor said his words were taken "completely out of context."

He maintained that the conversations were "part of a political process to leverage to be able to pass a public works program, expand health care and get a deal where we don't raise taxes on people," he said.

On ABC, he reiterated his innocence, saying he "did nothing wrong. And if I did something wrong, I would have resigned."

The governor told ABC he had considered the possibility of nominating Oprah Winfrey to fill Obama's seat.

"She seemed to be someone who would help Barack Obama in a significant way become president," said Blagojevich, who had been discussing a replacement since before the November election. "She was obviously someone with a much broader bully pulpit than other senators."

Blagojevich, 52, said he worried the appointment of Winfrey might come across as a gimmick and that the talk show host was unlikely to accept. In the end, Blagojevich appointed former Illinois Attorney General Roland Burris to the vacant seat.

Jeffrey Shaman, a constitutional law professor at DePaul University in Chicago, said impeachment trials are really more political procedures than fair trials and cannot be completely unbiased. Under the Illinois Constitution, senators only need to find cause to remove the governor from office, and they get to define what cause is.

Instead, the governor will spend what may be one of his few remaining days in office making the rounds of TV studios in New York, trying to salvage what's left of his flagging political career.