Accessibility links
Laos Brewmaster Has High Hopes For Local Beer Only about 1 percent of Beerlao finds its way abroad, but beer maker Sivilay Lasachack hopes to increase that to 10 percent in the next five years. She's not the only one who thinks the beer has a global future: Carlsberg recently acquired a 50 percent stake in the company. 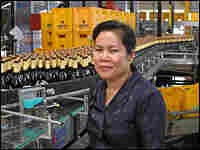 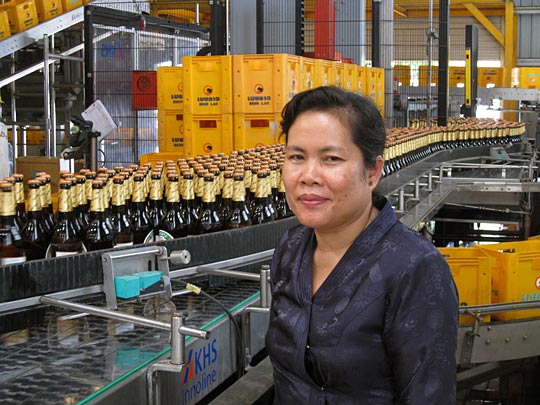 Brewmaster Sivilay Lasachack, shown beside a bottling line at the Beer Lao plant outside Vientiane, learned to make beer in Eastern Europe.

A brewmaster from Laos has it in her head to make her country's national beer into a global brand — or at least a niche brand with a global reach.

"I don't like to drink," she says. "I am brewmaster, but can't drink a lot of beer. Because I don't prefer to get drunk."

But she does like to make beer. And she's making plenty of it these days at the Lao Brewery Co. just outside the capital of Vientiane.

Laos is one of the poorest — and most sparsely populated — countries in Southeast Asia. But the brewery is state of the art. And it's running nonstop, producing Beerlao in bottles, kegs and cans. The brewery makes 80,000 cases of beer a day.

Lasachack says it makes about 20 liters of beer per person per year. That's almost as much beer as Americans drink. But the Lao weren't always so fond of their beer. The brewery was actually started by the French for the French back when they were the colonial power in Laos.

Lasachuk never much liked that idea. She remembers riding past the brewery one day as a teenager and thinking the Lao should be running it, not the French.

Once the communists took over, she got her chance — when she was given a scholarship to study in the Eastern Bloc with some of the world's best. She trained in Prague and Berlin, as well as Copenhagen.

Six years later she was back, and she set about changing the beer made at the factory now under state control. She quickly ditched the old French recipe — too bitter, she says — and replaced it with a new one that used more rice instead of expensive, hard-to-get imported grains.

"It's a good thing for Lao person, because the Lao person — the Lao customer — also prefer that one," she says.

Did they ever. Production steadily increased from just 3 million liters a year to 200 million liters a year. And it's not just the Lao drinking it, but foreign tourists, too — many of whom have their first frosty Beerlao at one of the many restaurants that have sprouted up in the capital along the Mekong River.

"It tastes similar to some of the beer in Canada that I like to drink, actually," says Aaron Thurmeyer, visiting from Calgary. "It goes down really smooth. It's cheap; cheap is nice. Since I've been in Lao, I've had nothing but. It seems to be the only way to go."

His traveling companion Sarah says she's a fan, too, and would drink it at home if she could.

"I think I would buy it just for the simple fact that I drank it overseas and I can get a little bit of it back home. You know, bring Laos with you, sort of," she says.

That's exactly what Sivilay Lasachack and her team are counting on: a word-of-mouth campaign — rather than a big advertising blitz they can't afford anyway — to create the kind of beer buzz that Mexico's Corona enjoyed back in the '70s. Lasachack says her beer is better than Corona — and that it stacks up well in international competitions. Beerlao has won several top awards.

So far, Beerlao is exported to the U.S., France, the UK, Japan, Australia, Vietnam, Thailand and Cambodia. But the brewery's capacity is "not so big," she says.

Only about 1 percent of production finds its way abroad, Lasachack says. She hopes to increase that to 10 percent in the next five years.

She's not the only one who thinks the beer has a future outside Lao. Carlsberg recently acquired a 50 percent stake in the company and has agreed to use its global distribution network to help grow the brand.

Until then, Lasachack says, she's resigned to hearing more of the same at international competitions: "Great beer," people say. "But where's it from? Where is Laos, anyway?"