Accessibility links
Jimmy Carter Offers A Peace Plan 'That Will Work' In his new book, We Can Have Peace In The Holy Land: A Plan That Will Work, former President Jimmy Carter presents his strategy to end fighting between Israelis and Palestinians.

Listen
Jimmy Carter Offers A Peace Plan 'That Will Work' 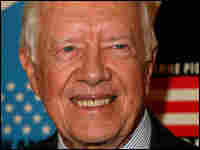 In his new book, We Can Have Peace In The Holy Land: A Plan That Will Work, former President Jimmy Carter presents his strategy to end fighting between Israelis and Palestinians.

The 39th president of the United States, Carter is the author of Palestine: Peace Not Apartheid and the founder of The Carter Center, an organization that promotes conflict resolution and peace.

News and analysis of recent events in Israel and Palestine: 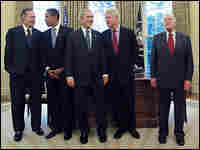 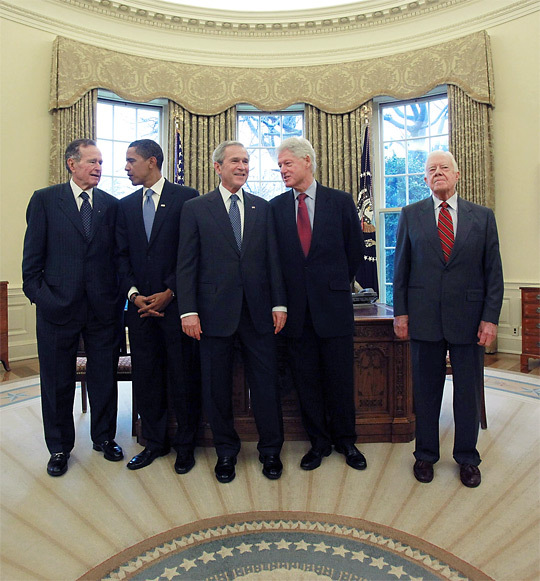 Nearly 30 years ago, Israel and Egypt signed a peace treaty that holds to this day. Much of the credit for that treaty goes to former President Jimmy Carter.

In the decades since, Carter has pursued a much more elusive goal: a lasting peace between Israel and the Palestinians. And he says there have been three recent developments that could help achieve it.

The first development was the election of Barack Obama as president, he tells NPR's Renee Montagne. For the Middle East, Carter said, that should mean "a balanced and aggressive commitment to bring peace. That's quite a change."

The former president also cited progress in his meetings with members of the Palestinian parties, Hamas and Fatah, in April and December of 2008.

"For the first time, the Hamas leaders pledged that they would accept any peace agreement negotiated between the Palestinian leader Mahmoud Abbas and Israel," Carter said — as long as Palestinians approve the agreement in a referendum.

And the recent violence between Israel and Hamas in the Gaza Strip, which Carter called an "evolving tragedy," adds what he said is "another element of urgency to bringing peace to Israel."

Carter has written a new book on that topic, titled We Can Have Peace in the Holy Land. It follows his 2006 analysis, Palestine: Peace Not Apartheid, which sparked protests from supporters of Israel.

His latest book is subtitled, "A Plan That Will Work." And that plan, Carter said, is no secret: a two-state solution in which Israel's right to exist is recognized by its neighbors — within its pre-1967 borders.

Noting that those borders could be altered by negotiations, Carter said, "By the way, that's also what's been espoused most recently by the prime minister of Israel at this moment — that is, Ehud Olmert."

"But there are two very difficult things," Carter said. "One is, Israel so far has not been willing to withdraw from Palestine, that is, from the West Bank. And secondly, the Palestinians will have to accept the proposition that all — a flood of Palestinians cannot return inside Israel.

"They'll have to return, I would say, into the West Bank and Gaza, not into Israel. And be compensated, those that can't return."

Carter has advocated engaging with Hamas to negotiate the Palestinians' future. Asked how that can be accomplished when Hamas, which the U.S. regards as a terrorist organization, has stated that its long-term goal is to destroy Israel, Carter said the group can change.

"Hamas has agreed, with me and publicly, that they will accept Israel's right to exist and to live in peace," Carter said.

The former president expressed confidence that if peace talks are held soon, they will be meaningful. Obama's appointment of former Sen. George Mitchell as a special mediator to the region "holds good promise that something is going to be done," Carter said.

In his first full day in office, Obama pledged to help bolster the cease-fire that has ended the most recent conflict in Gaza. So far, Carter said, Obama is making good on his campaign-trail vow.

"President Obama, while he was a candidate, promised that he would start immediately" to work on a plan to bring peace to Israel and its neighboring countries, Carter said.

"This is quite different from what Bill Clinton did or what George Bush did in their administrations, when they only turned to the Mideast aggressively — or somewhat aggressively, on the part of Bush — for the last year they were in office."

The difference is crucial. "You have to start early, you have to do it when you have a lot of political clout in order to get anything done," Carter said.

As for what part he might play in any new peace talks, the former president said it won't be a large one and that he would work through his Atlanta-based nonprofit organization on public policy.

"I don't think I would have a sort of official role," Carter said, "and I don't want any. I'm much more free if I just represent the Carter Center." 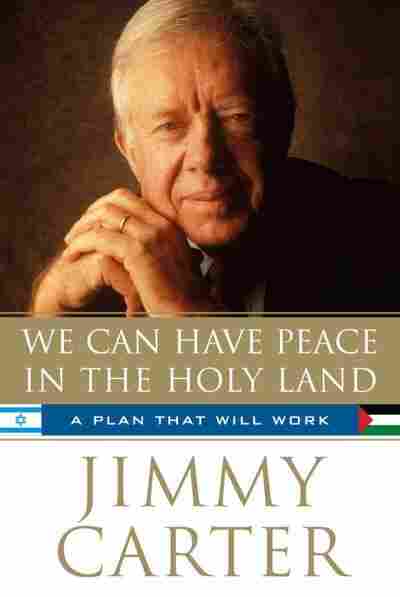 We Can Have Peace in the Holy Land

A Plan That Will Work