Accessibility links
Movie Review: 'New In Town' - A City Girl And A Townie, In A Slushy Romance Renee Zellweger jumps out of the corporate frying pan and into the snow in New in Town, a fish-out-of-water farce set in Minnesota. Harry Connick Jr. keeps her company, but hardly turns up the heat.

A City Girl And A Townie, In A Slushy Romance

A City Girl And A Townie, In A Slushy Romance 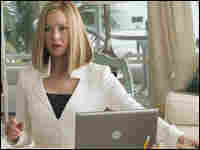 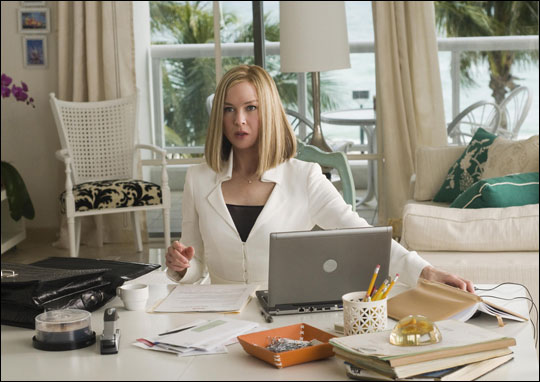 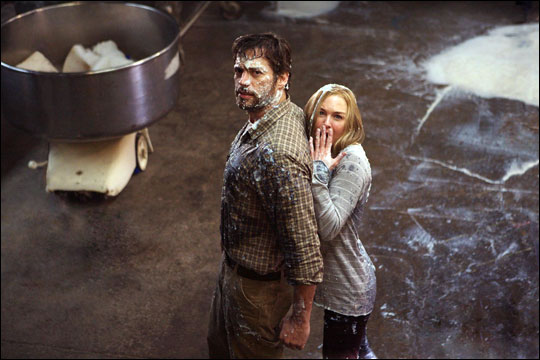 Sweet and lowdown: Zellweger and Harry Connick Jr., making the best of a sticky situation.

The explanation I like best for the formulaic idiocy of New In Town is that the film is a practical joke being played on new-in-Hollywood director Jonas Elmer — a joke not unlike the ones certain characters play on Renee Zellweger's character when she arrives in Minnesota at the beginning of the movie.

Elmer, the director, is fresh from Copenhagen and apparently making his English-language debut, so let's assume he's just hapless rather than deserving of mockery.

Zellweger's character, Lucy, on the other hand, should know better. She's a pouty, presumptuous, high-powered Miami businesswoman who, don'tcha know, has been sent to the land of tapioca and gosh-darn-it goodness to downsize a food-packaging plant.

The plant's employees (all sounding like extras from Fargo) immediately start playing practical jokes on their new boss, though you'd think they'd be worried about their jobs. They invent holidays, fix her up with eligible bachelor Ted (Harry Connick Jr.) — never mentioning that he's the plant's union rep — and humiliate her at every opportunity. She, in turn, warms to them and tries to save the plant from downsizing.

I'm abbreviating. But just a tad.

Broad accents, broader slapstick and a painfully willful shrinking from anything remotely original ensue. Also much condescension toward both the characters and the audience.

About the most that can be said for Zellweger's performance is that her pursed-lipped, tight-assed, townie-on-the-plains routine plays less annoyingly here than it did in its recent cowboy outings — specifically in Appaloosa and Australia. (Yeah, yeah, I know; that was Nicole Kidman, but she was doing a spot-on Zellweger impersonation.)

It hardly matters, anyway, because there's no chemistry between Zellweger and Connick, and there's not a moment in which anything anyone does feels remotely plausible.

Least of all the tapioca-fight that's supposed to be a comic high point.