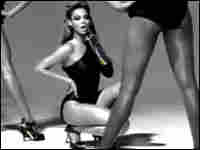 Watch Beyonce's "Single Ladies (Put A Ring On It)"
MTV.com 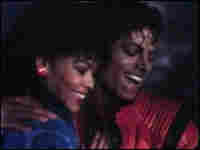 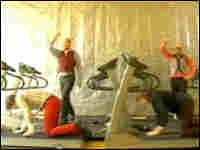 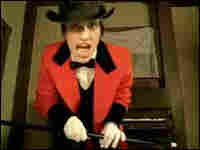 Watch Panic At The Disco's "I Write Sins Not Tragedies"
MTV.com

When I make a video, I just assume the majority of watchers are going to be on the Internet.

The days of waiting patiently for a favorite music video to appear on MTV are long over, swallowed up by the instant gratification of the smaller screen. But as MySpace, iPhones and Youtube allow music videos to be seen anywhere and anytime, directors are discovering that viewing habits aren't the only things changing.

Music video director Sean Drake says part of the shift is an effort to capture the attention of an audience that never seems to stop multitasking.

"When I make a video, I just assume the majority of watchers are going to be on the Internet ... IM-ing someone in a chat [while] ... doing some other task on Word and checking their Facebook," says Drake.

So how does a music video director command the attention of the Internet viewers? One obvious trick is using flashy visuals.

For Panic at the Disco's "I Write Sins Not Tragedies" video, Drake created an over-the-top wedding attended by clowns, fire-eaters, pink-haired strippers and accordion players. He describes the scene as "a lot of costuming and makeup, but also a lot of face shots and close-ups."

Compare that video with one of the classics from MTV's golden age: Michael Jackson's 1983 hit "Thriller" features Jackson leading a huge cast of dancing zombies.

Directed by John Landis, "Thriller" is a complicated, baroque video with relatively few close-ups and so many zombies that it can be hard to tell what's going on. Watching it on a small screen is like taking in Spartacus on an iPhone.

Grammy-winning music video director Joseph Kahn says that iPhones are fine for music videos. But because directors never know whether their work will be played on a box or a rectangle, they tend toward "center framing," which puts the image in the middle.

"I can almost look at every video and it's pretty much a center-framed video," says Kahn. "The whole image is completely seen at first glance on a tiny little rectangle or a tiny little square."

Kahn cites Beyonce's "Single Ladies (Put A Ring On It)" as an example of a video that translates particularly well to the small screen. In it, a barelegged, black-bodysuited Beyonce performs with two backup dancers in stark contrast against a simple white backdrop.

"It's very effective because it doesn't rely on any format whatsoever. ... It's essentially just a dance video in the center of a screen," says Kahn.

Toward the end, the "Single Ladies" video intensifies the kind of hyperediting MTV made famous 20 years ago. Kahn says fast cuts work better on small screens than on big ones. Kahn estimates that he cuts about five times more now than he would have in videos from the 1980s.

But fancy editing or elaborate productions are less important than a great concept. One of the most successful music videos of the past few years has no cuts at all. In 2006, the band OK Go was relatively unknown when it created a video viral sensation for the song "Here It Goes Again." The video shows the band members — center-framed and well-lit — on a simple set, dancing on moving treadmills. They glide past each other like ice skaters and slide through each others legs.

"It's sort of beautifully crazy in its choreography; they come up with trick after trick," says Roger Beebe, a professor at the University of Florida and the co-editor of the book Medium Cool: Music Videos from Soundies to Cellphones. "I don't know if that band or that single would have made the cut in the glory days of MTV."

And that's what Beebe loves about the music videos online — that it comes down to creativity more than bloated budgets or great cinematography. Music is big, he says, even if the pictures got small.

An earlier Web version of this story incorrectly identified Martin Scorsese as the director of the "Thriller" video. In fact, the director was John Landis.