Accessibility links
Nature Conservancy Fights Planned Border Fence The Department of Homeland Security has completed 90 percent of its controversial 670-mile border fence. But the barrier is running into opposition from conservationists in far southern Texas, where the Nature Conservancy has refused to give up its land. 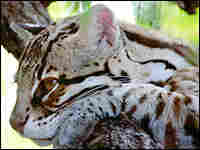 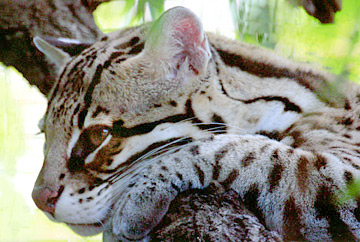 An ocelot on the Nature Conservancy's land in southern Texas. 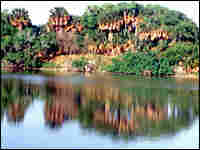 The Department of Homeland Security has completed 90 percent of its controversial 670-mile border fence — most of the sections from California to western Texas. But the border barrier is running into opposition from conservationists in far southern Texas.

From the road there, it's not obvious there's much down to protect. The great river delta that comprises the southern tip of Texas, known as the lower Rio Grande Valley, is a vast patchwork of citrus orchards and vegetable fields, shopping centers and car lots.

Yet, down on the banks of the muddy, torpid Rio Grande, "It's a jungle," says Sonia Najera of The Nature Conservancy. "It's incredible wildlife and vegetation and habitat."

The Nature Conservancy owns the Lennox Foundation Southmost Preserve — a thousand acres that include one of the largest remaining forests of native sabal palm. There, imperiled wildcats like the ocelot and jaguarundi still skulk through the underbrush. Birdwatchers come from around the world to check green jays, chachalacas and black-bellied whistling ducks off their life lists.

So last month, when the Department of Homeland Security announced its intention to erect an 18-foot tall, concrete-and-steel barrier for a mile through the preserve, the Nature Conservancy was not happy. Though the fence would be built on mainly nonforested land, conservationists worry it will sever the refuge.

"If the fence is constructed, it will trap three-quarters of the preserve between the fence and the river. That includes all of our facilities, includes the home of our preserve manager who lives there full-time," Najera says.

The conservancy has refused to accept the government's offer of $114,000 in compensation for the land under the fence. Now, Homeland Security has sued in federal court to force the sanctuary to let it build the barrier.

Other landowners, farmers and cities along the river also have said no to the fence. But a spokesperson with the federal agency says they've been able to work out a deal with most of the holdouts.

Dan Doty of the Border Patrol's Rio Grande sector says the new wall — though industrial in appearance — will be permeable and allow the passage of wildlife. He says people who live and work along the river will also be able to get through the wall by means of secure gates.

"The Rio Grande River is a beautiful resource. Our farmers depend on it, the communities here depend on it. Our goal is not to deny access to the river to anybody," Doty says.

The fence is part of border security measures mandated by Congress that include physical barriers, more agents and high-tech detection devices.

Though there's widespread skepticism among border residents as to whether the fence will do any good, the government reports that arrests of illegal crossers are down 19 percent since the fence went up — which it claims is significant, even accounting for the sour economy.

But conservationists remain concerned that a more secure border comes at a high price for habitat. The Nature Conservancy refuge is part of a 30-year effort to piece together public and private lands into a continuous wildlife corridor along the lower Rio Grande.

"Some estimates are that there's 1 percent of native natural land left along the river," says Betty Perez, a rancher and environmentalist in the area. "And the wall is fragmenting that."

The Nature Conservancy is hoping that the new Obama administration may consider alternatives to the final stages of the border barrier.