Accessibility links
Global Warming Is Irreversible, Study Says Even if carbon dioxide emissions were halted today, global warming and the environmental disruption that comes with it would continue for 1,000 years, says a sobering study. Scientists are urging politicians to proceed with caution as they set new target levels for emissions. 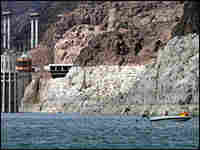 Nevada's Lake Mead had a white 'bathtub ring' upstream from the Hoover Dam in July 2007. A seven-year drought and increased water demand spurred by climate change and explosive population growth in the Southwest has caused the water level at Lake Mead, which supplies water to Las Vegas, Arizona and Southern California, to drop more than 100 feet to its lowest level since the 1960s. Ethan Miller/Getty Images hide caption

Climate change is essentially irreversible, according to a sobering new scientific study.

As carbon dioxide emissions continue to rise, the world will experience more and more long-term environmental disruption. The damage will persist even when, and if, emissions are brought under control, says study author Susan Solomon, who is among the world's top climate scientists.

"We're used to thinking about pollution problems as things that we can fix," Solomon says. "Smog, we just cut back and everything will be better later. Or haze, you know, it'll go away pretty quickly."

That's the case for some of the gases that contribute to climate change, such as methane and nitrous oxide. But as Solomon and colleagues suggest in a new study published in the Proceedings of the National Academy of Sciences, it is not true for the most abundant greenhouse gas: carbon dioxide. Turning off the carbon dioxide emissions won't stop global warming.

"People have imagined that if we stopped emitting carbon dioxide that the climate would go back to normal in 100 years or 200 years. What we're showing here is that's not right. It's essentially an irreversible change that will last for more than a thousand years," Solomon says.

Solomon is a scientist with the National Oceanic and Atmospheric Administration. Her new study looked at the consequences of this long-term effect in terms of sea level rise and drought.

If we continue with business as usual for even a few more decades, she says, those emissions could be enough to create permanent dust-bowl conditions in the U.S. Southwest and around the Mediterranean.

"The sea level rise is a much slower thing, so it will take a long time to happen, but we will lock into it, based on the peak level of [carbon dioxide] we reach in this century," Solomon says.

The idea that changes will be irreversible has consequences for how we should deal with climate change. The global thermostat can't be turned down quickly once it's been turned up, so scientists say we need to proceed with more caution right now.

"These are all ... changes that are starting to happen in at least a minor way already," says Michael Oppenheimer of Princeton University. "So the question becomes, where do we stop it, when does all of this become dangerous?"

The answer, he says, is sooner rather than later. Scientists have been trying to advise politicians about finding an acceptable level of carbon dioxide in the atmosphere. The new study suggests that it's even more important to aim low. If we overshoot, the damage can't be easily undone. Oppenheimer feels more urgency than ever to deal with climate change, but he says that in the end, setting acceptable limits for carbon dioxide is a judgment call.

"That's really a political decision because there's more at issue than just the science. It's the issue of what the science says, plus what's feasible politically, plus what's reasonable economically to do," Oppenheimer says.

But despite this grim prognosis, Solomon says this is not time to declare the problem hopeless and give up.

"I guess if it's irreversible, to me it seems all the more reason you might want to do something about it," she says. "Because committing to something that you can't back out of seems to me like a step that you'd want to take even more carefully than something you thought you could reverse."