Accessibility links
Fate Of One Family Illustrates Gaza War's Ferocity Israeli attacks killed at least 29 members of the Samouni family in Gaza City. It's among the incidents that are prompting calls for a probe of alleged violations of the laws of war by Hamas militants and Israeli soldiers during recent fighting in Gaza. 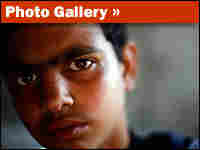 Destruction Of A Neighborhood And A Family
David Gilkey/NPR 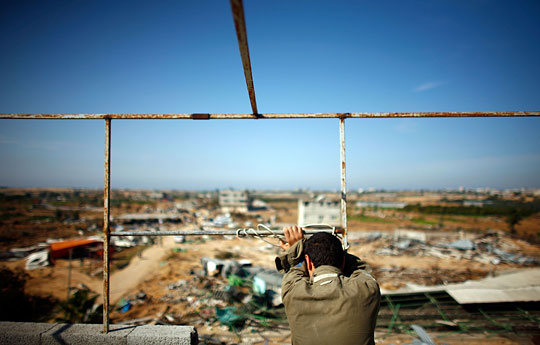 The Zeitoun neighborhood south of Gaza City lies in total devastation, Jan. 21. At least 29 members of the extended Samouni family died as the Israel Defense Forces pushed into Zeitoun with bombing and shelling beginning Jan. 4.

Two Palestinian boys stand on top of the roof of a mosque destroyed by Israel Defense Forces in the Zeitoun neighborhood. David Gilkey/NPR hide caption 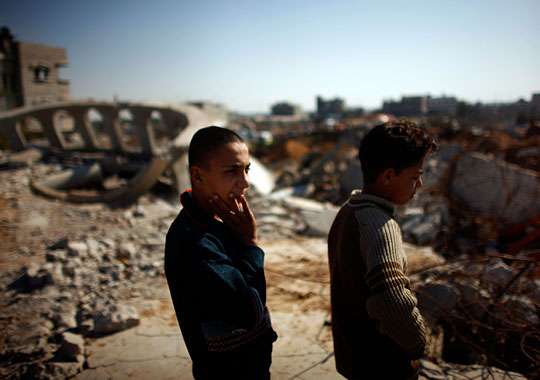 Two Palestinian boys stand on top of the roof of a mosque destroyed by Israel Defense Forces in the Zeitoun neighborhood.

Senior U.N. officials and human rights activists are calling for an independent probe of alleged violations of the laws of warfare by Hamas militants and Israeli soldiers during the recent fighting in the Gaza Strip.

Hamas is accused of using Palestinian civilians as human shields and indiscriminately targeting Israeli civilians. Israel is accused of using disproportionate force in civilian areas and failing to protect civilians — especially in the case of the Samouni family. At least 29 members of that extended family were killed by Israeli fire during the war.

Dazed and dirty, 9-year-old Abdullah Samouni walks around the ruined landscape of his Zeitoun neighborhood on the southern edge of Gaza City. Recorded readings of the Quran drift out from a makeshift mourning tent. Almost all of the homes and greenhouses that belonged to this large farming family have been flattened.

The piles of rubble evoke an earthquake — except for the thick tracks and tread marks in the dirt from Israeli tanks and armored bulldozers. Gaping holes scar the few Samouni homes that are still standing.

Abdullah says he and some 20 of his relatives hid in one bedroom of their house when Israeli ground forces swarmed into Zeitoun around 6:30 a.m. on Sunday, Jan. 4. Abdullah says he remembers the red laser light from the soldiers' rifle sights darting around the dark room. One soldier, Abdullah says, asked his father to come forward.

"We were sitting in the bedroom, and the soldiers asked, 'Who is the owner of the house?' My dad went out with his hands up, and the Israeli soldier shot him immediately in the doorway," Abdullah recalls.

His father, 46-year-old Atiyeh, died instantly. One of Abdullah's brothers, 22-year-old Faraj Samouni, says he and others shouted "Children! Children!" in Hebrew as soldiers moved toward the bedroom, some firing their automatic rifles.

Witnesses say the survivors — some wounded — were eventually allowed to leave that house. Many fled to Wa'el al-Samouni's home nearby.

Short and frail, Ahmed Samouni looks younger than his 16 years. He says at dawn on Monday, Jan. 5, after about 90 Samounis had taken shelter in Wa'el's house, the shelling began again.

Ahmed's brown eyes look vacant as he describes the chaos as shells hit the house.

"They hit us with a bomb. Many in the house were killed; many were injured. My brother Izhaq was bleeding for two days. He was full of holes. I remember I gave him two tomatoes to eat. It was all he had before he died," Ahmed says.

Doctors and family members say the initial shelling killed 22 Samouni family members inside Wa'el's house. In the confusion and panic, roughly 50 others fled the partially collapsed house. Many of those, Ahmed says, were wounded. Nine people were left behind, including Ahmed; his mother, 42-year-old Laila; and at least three of his brothers.

"My brother Nissar was in kindergarten. What's his fault? Why to get him shot? He's 4 years old. He was with my mother. She was hugging him when he died. My brother Ismael kept bleeding for two hours and then he died. God grant us mercy," Ahmed says.

The Samounis' part of Zeitoun sits on slightly elevated farmland, key terrain for the Israeli army to control the southern approach to Gaza City. Witnesses say over the years militants have regularly launched rockets at Israel from the orange groves around the area.

But witnesses say there was little or no resistance here when the Israelis attacked. Evidence on the ground supports that: There are almost no casings from AK-47 rounds or remnants of rocket-propelled grenades — the main weapons of Hamas militants.

Witnesses in the area say Israeli soldiers knew there were wounded civilians in the Samouni houses but ignored pleas for help. Attempts to contact Palestinian emergency services proved fruitless.

"In the first two days of the ground offensive, we got 140 emergency calls for help from the Zeitoun area alone," he says.

Murad says in past attacks, the Israeli army had coordinated with the Red Cross and Red Crescent and had treated wounded civilians. So he was hopeful when he got the green light from the military on Jan. 4 to send an ambulance into Zeitoun.

But when Red Crescent driver Mohammed Shriteh drove his ambulance down Salahadin road into Zeitoun on Jan. 4 around 10:30 a.m., he says he was met by two Israeli tanks, an armored bulldozer and dismounted infantry. Shriteh says the soldiers then signaled him to stop and told him to get out of the car and strip off his shirt.

"They told me to lay down on the ground on my stomach. A soldier stood next to me and searched me. I told him that I'm from the Red Crescent. The soldiers just kept telling me, 'Shut up! Shut up!' They made some phone calls to I don't know who. Then they told me to just drive away and leave the area quickly," he says.

Shriteh drove off, frightened and worried. Murad says medics tried to give emergency medical advice to wounded Samouni family members over the phone. The Red Crescent and Red Cross were denied access to Zeitoun for three more days. The Red Cross finally reached the wounded and dead on the afternoon of Wednesday, Jan. 7.

Violations Of Rules Of War On Both Sides

Attorney Jonathan Drimmer is a war-crimes expert and former top prosecutor for special investigations and war crimes in the U.S. Justice Department.

Drimmer says information available so far suggests that serious violations of the rules of war were committed by both sides. The case against Hamas, Drimmer says, seems clear-cut.

"I think there is no question that Hamas did violate the rules of war by firing indiscriminately into civilian areas. They've done it over a substantial period of time, deliberately targeting civilian areas," he says.

Drimmer says the allegations against Israel — including charges the army used disproportionate force, failed to protect civilians and denied them medical care — all warrant further investigation.

"Anytime you have allegations of summary executions, of denial of medical care, of unnecessary deaths of civilians, it is greatly troubling; it is exactly what the laws of war are designed to prohibit," he says.

Calls For Investigations Into Alleged Abuse

"The investigation into the allegations of incidents in Zeitoun is ongoing. It is an investigation, which is being done at the command level, which is the highest level at the IDF. We're taking this very seriously. And we believe it's more important to do a very thorough investigation than to return something quickly," he says.

The prospect that either side will be held to account for any wartime abuse seems dim. There is evidence that after the fighting ended, Hamas militants here have beaten and, in some cases, shot Palestinian opponents and intimidated civilians into not talking to investigators or the media about Hamas' conduct during the fighting.

On the Israeli side, Prime Minister Ehud Olmert this week dismissed what he called the "moral acrobatics" of human rights groups, which he said have ignored years of Hamas rocket fire.

Olmert nonetheless ordered his justice minister to prepare legal teams to protect soldiers and officers from any war-crimes charges stemming from the Gaza operation. And Israel's military censor has barred publication of any pictures or names of field commanders who served in the Gaza offensive.