Accessibility links
Blagojevich Misses Trial, Pleads Case On TV State senators in Illinois are deciding whether to remove Gov. Rod Blagojevich from office. Impeachment proceedings began Monday. The governor says the rules are biased against him, and he's refusing to take part in the trial. Instead, Blagojevich has been offering his defense on national television shows.

State senators in Illinois are deciding whether to remove Gov. Rod Blagojevich from office. Impeachment proceedings began Monday. The governor says the rules are biased against him, and he's refusing to take part in the trial. Instead, Blagojevich has been offering his defense on national television shows.

This is Morning Edition from NPR News. I'm Linda Wortheimer.

And I'm Renee Montagne. Steve Inskeep is on assignment. The impeachment trial for Illinois Governor Rod Blagojevich continues this morning. Illinois has never impeached a governor and in this case, that governor was a no-show. Instead, he's been offering his defense on national TV. NPR's Cheryl Corley reports.

CHERYL CORLEY: As the impeachment trial began, chairs for Illinois Governor Rod Blagojevich and his attorneys sat vacant. Presiding Judge Thomas Fitzgerald, the head of the Illinois Supreme Court, told the senators to continue as if the governor had entered a plea of not guilty.

Judge THOMAS R. FITZGERALD (Illinois Supreme Court Chief Justice): This is a solemn and serious business that we are about to engage in. Both you and I have taken an oath to do justice, in essence, to be fair. I know that I, and I'm sure that you, come to this chamber and these proceedings prepared to be true to that oath. So it should be.

Mr. DAVID ELLIS (State Prosecutor, Illinois): The audits will show that the governor liked splashy ideas, big ideas, headlines. But when it came to implementing his policies, he consistently violated state law and federal law, often jeopardizing the safety of our citizens in the process.

CORLEY: Governor Blagojevich calls the Senate's rules for this impeachment trial biased. He says the senators have already made up their minds to remove him from office. So while the trial moves forward in the Illinois capital, the governor has been pleading his case on network television shows.

Unknown woman: This morning, the embattled governor of Illinois. Did he try to sell the president's Senate seat?

CORLEY: On "Good Morning America," for example, Governor Blagojevich reiterated his claim that he has done nothing wrong.

Governor ROD BLAGOJEVICH (Democrat, Illinois): Whatever happened to the presumption of innocence? How is it that you can make a couple of allegations, take some conversations completely out of context? The whole story's not told.

CORLEY: Neither the governor nor the senators can call witnesses in this trial that may play a role in the criminal case against him. But the governor says he needs witnesses like White House Chief of Staff Rahm Emanuel, who has said publicly his conversation with the governor about the U.S. senate seat was appropriate.

Blagojevich says that affirms his claims of innocence. Today, he's scheduled to plead his case on TV again. It's lent an air of surrealness to the impeachment proceedings. And that was evident when the governor appeared on the ABC show "The View," and he was asked to imitate a former president.

(Soundbite from "The View")

Ms. JOY BEHAR (Co-Host, "The View"): Wait a minute. He does a fabulous Nixon impression. Do it for us.

Governor BLAGOJEVICH: Who said that?

CORLEY: The governor did not take that bait, and he never directly answered questions about conversations the government secretly recorded. Last night, on CNN's "Larry King Live," a listener from Springfield, Illinois, wanted to know if there was more to the media interviews than the governor was letting on.

Unidentified Caller: Is this media blitz his attempt to taint his upcoming criminal trial, and to taint the prospective jury pool?

Governor BLAGOJEVICH: No. What I'm trying to do is - trying to explain to any fair-minded person across America, is that a governor elected twice by the people, I'm being denied the right to be able to show that accusations against me are not true.

CORLEY: Illinois lawmakers say the governor can summon witnesses to the impeachment trial, and even appear on his own behalf. Republican Senate Minority Leader Christine Redogno says with such a grave situation, the Senate wants to make sure everyone has their say.

Senator CHRISTINE REDOGNO (Republican Senate Minority Leader, Illinois): We're not trying to play getcha. We really want to have a fair hearing on both sides. So if the governor were to show up, you know, my guess is that we'd be anxious to hear him.

CORLEY: It will take 40 votes, two-thirds of the Illinois senate, for lawmakers to remove Governor Blagojevich from office. He says it's a given that he'll lose his seat. The Senate could also bar the governor from ever holding office in Illinois again. Cheryl Corley, NPR News. 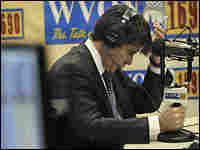 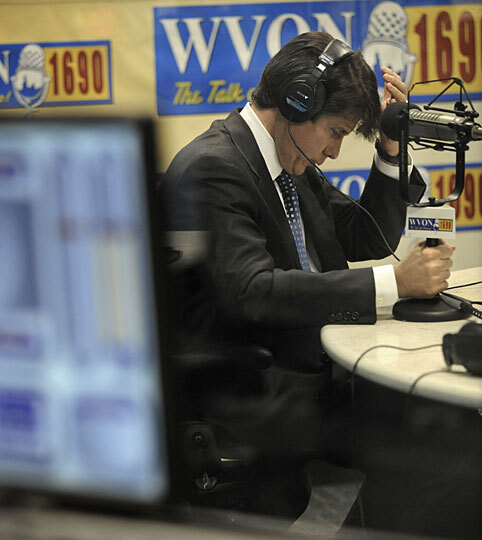 Illinois Gov. Rod Blagojevich listens to a caller while on the air with radio talk show host Cliff Kelley at WVON radio station in Chicago on Friday. 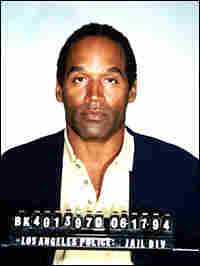 The booking mug shot for O.J. Simpson, taken on June 17, 1994. After his trial, Simpson wrote a book and went on a media tour. Los Angeles Police Department via AP hide caption 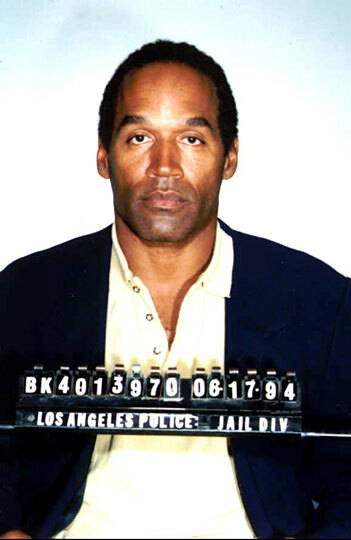 The booking mug shot for O.J. Simpson, taken on June 17, 1994. After his trial, Simpson wrote a book and went on a media tour. 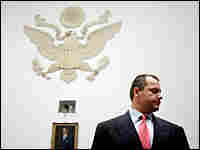 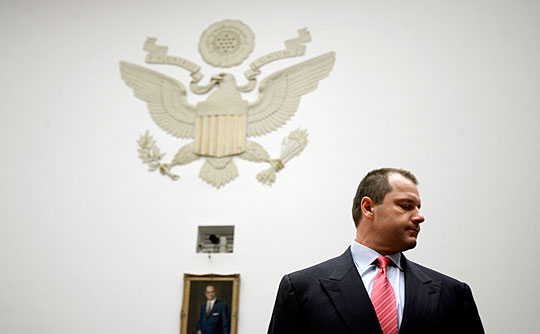 Tick, tick, tick. That's the sound of Gov. Rod Blagojevich's career about to implode. The besieged Illinois governor is playing with a tricky admixture of self-importance, overexposure and downright showmanship. It may be only a matter of time.

Tick, tick, tick. In Springfield on Monday, the state Senate opened an impeachment trial. (The Illinois House voted to impeach him just over two weeks ago.) The governor is accused of abusing his power by, among other charges, attempting to sell a U.S. Senate seat. Blagojevich says he is not participating in the proceedings because the rules are skewed against him. Instead, he is spending more time in prayerful meditation and hanging out with his family.

In truth, he's going on a breakneck TV blitz: the Today Show, Good Morning America, The View, Larry King Live — all in one day! He's stretching his 15 minutes of fame into a couple of hours, minus commercial breaks. He is mounting an all-out "self-defense by public relations onslaught" strategy.

When people in the public eye — politicians, actors, sports figures — get in trouble, they usually follow a pattern, says Gary Hoppenstand, who teaches popular culture at Michigan State University. "First they say they are sorry. Then they go to the public to try to gain the sympathy of their audience."

Blagojevich, on the other hand, "is being very belligerent, defiant, almost to the point of absurdity," Hoppenstand says.

In the past few days, Blagojevich has pointed out similarities between himself and other mistreated heroes, including Nelson Mandela, the Rev. Martin Luther King Jr., Mohandas Gandhi and wrongfully accused cowboys in Hollywood movies.

"He is saying that any discussion of character must be carried on in the court of public opinion," Hoppenstand says. "He is trying to bypass the political structure." The irony, Hoppenstand adds, is that Blagojevich is critical of the media for how he is portrayed, but he is using the media nevertheless.

The relentless self-distribution by Blagojevich is the latest episode in a great American tradition — a quest for grace via limelight. Self-help meets self-hype. He's following in a long line of human time bombs — some were found guilty of crimes; others were only accused of or suspected of wrongdoing — whom a mesmerized public watches in mouth-agape disbelief.

The prime example is O.J. Simpson. Tried for the 1994 murder of his estranged wife, Nicole Brown, and her friend Ronald Goldman, Simpson was found not guilty. He set out to rehabilitate his reputation by giving interviews and writing a book.

When uberhomemaker Martha Stewart was charged with insider trading, she snapped back with a full-page ad in USA Today in 2003 — and a Web site --proclaiming her innocence. Baseball demigod Roger Clemens took to the airwaves in 2008 to deny any involvement with performance-enhancing drugs. Michael Jackson, Britney Spears and others have launched self-promotional blitzes to try to burnish their tarnished images.

In trying times, other politicians besides Blagojevich have gone on self-publicity tours to try to hold on to their power. Gary Hart turned to Ted Koppel and Nightline in 1987 to address charges of adultery. Bill Clinton was questioned by Steve Kroft of 60 Minutes — after the Super Bowl in 1992 — about accusations of philandering. Rep. Gary Condit, a California Democrat who had an affair with Chandra Levy, a young Washington intern, was interviewed by Connie Chung about Levy's disappearance in 2001.

Public self-defense is not exclusive to the U.S. A few years ago, Philippine President Gloria Macapagal Arroyo was accused of election corruption. Opponents called on her to resign. Instead, she staged a public campaign to maintain her power.

From Charming To Alarming

Tick, tick, tick. Now Blagojevich is all over television, saying that he considered appointing TV superstar Oprah Winfrey to fill the Senate seat vacated by President Barack Obama. He chose former Illinois Attorney General Roland Burris instead and introduced Burris at a news conference that starred — tada! — Blagojevich. Incidentally, Burris himself went on a PR trek to convince a skeptical public that he was the right man for the job.

Marina Ein, a Washington-based public relations maven, has handled publicity for celebs and politicians — including Gary Condit — through the years. Asked about Blagojevich, Ein says, "I think what he ought to do is leave gracefully and write the book. He should get a power agent because he has an amazing story to tell. He has been an amazingly charismatic person."

When something goes wrong in the lives of people who have outsized personalities, Ein says, "Often the same force of character that made them so charming serves in an exact way to deconstruct them."